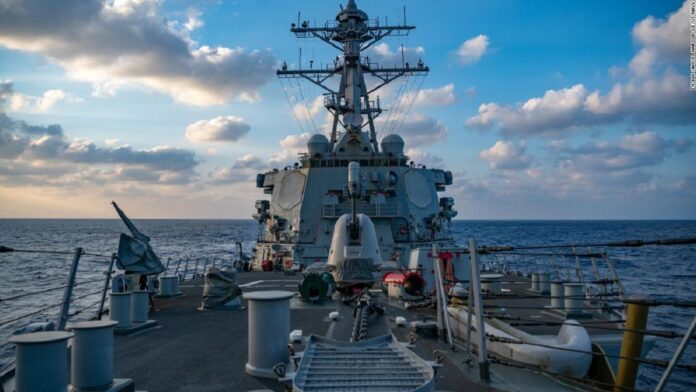 The USS Benfold, an Arleigh Burke-class destroyer, sailed around the Spratly Islands in a way “consistent with international law,” according to a statement released by 7th Fleet Public Affairs on Wednesday, though the vessel violated China’s newly implemented maritime policy.

“This freedom of navigation operation (“FONOP”) upheld the rights, freedoms, and lawful uses of the sea,” the Fleet said in a statement. “USS Benfold demonstrated that Mischief Reef, a low-tide elevation in its natural state, is not entitled to a territorial sea under international law.”

The Chinese government implemented new identification rules this month that it looks to enforce throughout much of the South China Sea. Officials of the Asian country accused the United States’s actions of being illegal. In light of the new rules, many ships will have to identify their names, call signs, and next ports of call with Chinese authorities upon entering their expanded territorial waters.

“On September 8th, the USS Benfold guided missile destroyer illegally broke into the waters adjacent to the Mischief Reef of Nansha islands without the approval of the Chinese government,” Air Force Col. Tian Junli, a spokesperson for China’s Southern Theater Command, said in a statement, according to CNN. “The air force carried out follow-up surveillance and issued a warning to drive it away.”

The U.S. “violated China’s sovereignty and security,” the statement from Tian said, though the 7th Fleet dismissed the comments as “false,” arguing that the voyage was conducted “in accordance with international law and then continued on to conduct normal operations in international waters.”

In July, Defense Secretary Lloyd Austin said China’s “claim to the vast majority of the South China Sea has no basis in international law,” according to CNN.

“It is widely known that the U.S. Navy conducts freedom of transit operations around the world in accordance with international laws,” Captain Joseph Gradisher, a retired Navy sailor who now works in the Office of the Deputy Chief of Naval Operations for Information Warfare, told the Washington Examiner. “And the Navy will continue to do that. Protestations from folks who think we may not have followed those rules, it is something we take note of, but I’m very confident that the folks out in 7th Fleet do these types of operations by the letter.”

The Carl Vinson Carrier Strike Group is currently operating in the South China Sea as well. The strike group, which is there for the first time since its 2021 deployment, is conducting maritime security operations, according to a statement from Lt. Cmdr. Miranda Williams of USS Carl Vinson Public Affairs.

The US can’t fight China for Taiwan, but it can help Taiwan make China think twice about starting a war

Haiti president’s assassination: What we know so far

“I owe the Afghan people an explanation”: Ashraf Ghani apologizes for fleeing Kabul