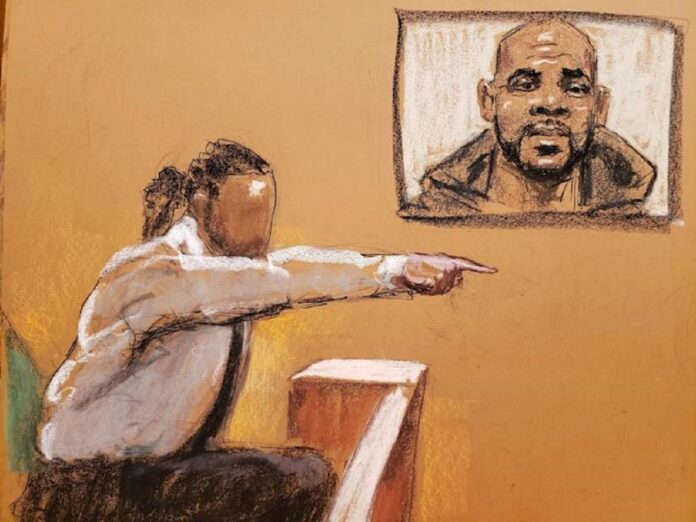 Testifying under the pseudonym “Louis,” the man said he met Kelly in 2006 while working the overnight shift at a McDonald’s drive-thru in suburban Chicago.

Kelly, who was 39 years old at the time, asked for the phone number of Louis’ female manager, and gave a slip of paper with his own phone number to Louis to thank him.

Louis, an aspiring R&B musician himself, texted Kelly – whose real name is Robert Sylvester Kelly – and was ultimately invited to one of the singer’s music studios to play some music he had worked on.

But Louis didn’t get very far.

“He let the song play for only five seconds and he said he didn’t like it,” Louis said.

Louis left the studio discouraged that “the king of R&B” wasn’t interested in his music. But he continued to text Kelly and later saw him at a gym around the corner from the McDonald’s where he worked in Markham, Illinois. Soon enough, he was regularly invited to Kelly’s home for parties and to play basketball with the singer.

Kelly ultimately invited Louis to a studio at his home in Olympia Fields, another suburb of Chicago. But when Louis got there, they met in a detached garage where Kelly had exercise equipment and a boxing ring, rather than in one of the studios the singer maintained in the main building.

“He asked me what I was willing to do for music,” Louis said on the stand.

Louis rattled off ways he would assist Kelly, like carrying his bags. But Kelly appeared unreceptive.

“He asked me if I had any fantasies,” Louis said, then quoted Kelly: “‘You never had fantasies about men?'”

“I said no,” Louis continued. “And then he crawled down on his knees and proceeded to give me oral sex. He zipped my pants down and he started doing it.”

Federal prosecutors in Brooklyn have accused Kelly of numerous sex crimes, saying he directed people to produce women for sex, and then abused them. Kelly has pleaded not guilty to all of the charges against him.

The indictments identify two men who prosecutors say Kelly sexually abused, in addition to over a dozen women. Four of those women have already testified in Kelly’s trial so far, and all of them said they too had aspirations in the entertainment industry when they met Kelly.

On that first occasion Kelly performed oral sex, Louis testified that he told the singer to stop. After Kelly stepped back, he swore Louis to secrecy.

Louis said he continued to see Kelly, still hoping to be mentored for his music career. He said Kelly sexually abused him on subsequent occasions, recording those encounters on an iPad and camcorders and asking that he call him “daddy.”

Other women who previously testified in Kelly’s trial also said Kelly recorded their sexual encounters and demanded they call him “daddy.”

Louis said that after additional encounters, Kelly’s attitude toward him changed.

“As our relationship got stronger, he said I was like a brother,” Louis said. “I was his ‘little brother.'”

Louis tried to bribe another R. Kelly accuser so she wouldn’t testify

Louis said he last saw Kelly in person in the late 2010s, in the hallway outside the singer’s apartment in Chicago’s Trump Tower. Kelly summoned him there to talk, saying he needed “protection.”

In the hallway, Kelly told Louis to write a letter saying that someone planned to pay him to say that he was in a homosexual relationship with Kelly. Louis testified that the letter’s content wasn’t true.

“He gave me the notepad and I wrote the letter,” Louis said on the stand. “He told me word for word what to say.”

Other witnesses also testified that Kelly forced them to write false letters distorting their relationship with the singer, at times even falsely saying they stole from him.

In August 2020, prosecutors accused Louis of attempting to bribe another witness not to testify against Kelly. Louis pleaded guilty to bribery in February 2021 and, facing a potential 15-year prison sentence, agreed to testify in the Brooklyn trial as part of a cooperation agreement with prosecutors.

In phone records included in the original charging documents, Louis suggested that Kelly would pay for the bribe. But on the stand, he testified that Kelly – in jail at the time – wasn’t involved in the scheme, and that he came up with it on his own.

While cross-examining Louis, Cannick suggested he had an incentive to tell a story that maligned Kelly to fulfill the terms of his cooperation agreement.

However, Cannick struggled to come up with factual discrepancies in Louis’s story. He spent several minutes asking Louis why he testified that Kelly opened the door to his Olympia Fields home on the day he allegedly sexually assaulted Louis for the first time, when Louis had said at another point that a person named “Candy” handled security at the door. Louis said Candy simply wasn’t there that day.

Louis testified that one of the reasons he tried to bribe the other accuser was to “help both of them.” He believed the woman might have recordings of sexual encounters with Kelly, and he hoped they would never see the light of day.

Despite his past, Louis said he still hoped to “make it in music.” Assistant US Attorney Elizabeth Geddes asked Louis the same question prosecutors asked other witnesses who said Kelly promised to bolster their music careers: What, if anything, did the singer do to help?

Louis gave the same answer as every other witness.