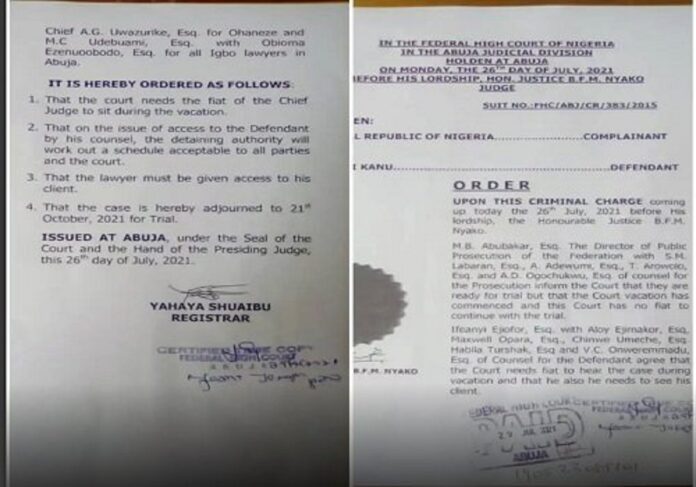 Lead Counsel to Nnamdi Kanu, leader of the Indigenous People of Biafra (IPOB) Ifeanyi Ejiofor on Thursday alleged the Department of State Security Services (DSS) denied him access his client

This, he said, was in violation of a court order.

He shared a copy of the order by Justice Binta Nyako of the Federal High Court that access must be granted to his client.

He said the DSS insisted the request to meet Kanu would be looked into and accordingly approved by their DG before access can be granted.

In a statement on his Facebook he said: “On the 26th Day of July 2021, His Lordship, Hon. Justice Nyako of Court No. 2 Federal High Court Abuja, after listening to our application, wherein I raised serious concerns about the safety and medical condition of Our Client, whom ordinarily was supposed to be produced in court on that day, ordered that the Detention Authority (DSS) should allow us access to him.

“Upon our arrival in their office today being the 29th Day of July 2021, conspicuously armed with the Court Order under reference, the officials of the DSS, though admitted being aware of the Said Order but directed Us to come up with a formal application stating the names of persons who are visiting, which request was promptly complied with.

“While we awaited to be admitted for the visit, the officials of the DSS unfortunately came back to inform us that we should go and await further communication from them pending the approval of our request.

“Attached for your ease of reference is a copy of the Court Order under reference. Details of the visit as worked out in His Lordship’s Chambers by Counsel on both sides and Representative of State Security Services, collectively agreed upon by everyone, is not stated in the attached order, which details is known to all parties on the modality of the visit.

“I am not surprised by the conduct of the DSS who has the history of disobedience to Court Orders, but I am worried because, we do not know the present state of health of Our Client. I cannot categorically confirm to the World the present state of Mazi Nnamdi Kanu, as at today.

“It is to be pointed out that Our Client is presently detained in DSS facility pursuant to an Order of Court, and another Order made by the same Court directing Our access to our Client on specified days, is unfortunately being flouted by the officials of the State Security Services, as they have no reason or justification of any kind to refuse us access.

“We will formally communicate the Court first thing tomorrow morning on this unfortunate and strange development, and shall keep the World updated.

“Should anything untoward happen to Our Client, the Nigerian Government and the Department of State Security Services should be held responsible.

“Let the world and all responsible Foreign Government take Notice of this dangerous trend. Thank you all.”

A message to the Public Relations Officer of the Service, Dr Peter Afunanya, for his response was not replied at the time of writing this report.