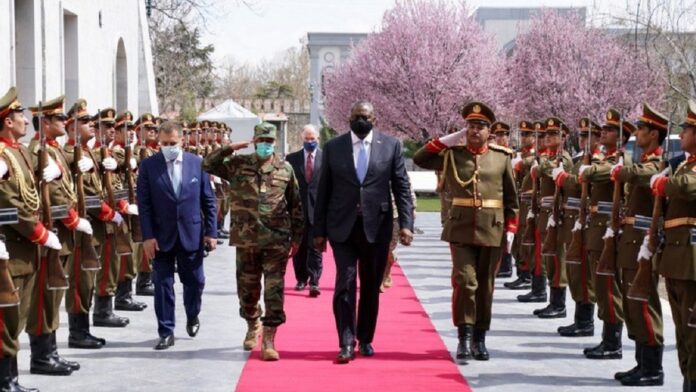 The U.S. Defence Secretary, Lloyd Austin, made an unannounced visit to Kabul on Sunday, amid conversations about the full withdrawal of international troops from Afghanistan.

While in Kabul, Austin met with senior Afghan officials, including President Ashraf Ghani, according to a statement from the Afghan presidential palace.

Austin’s visit to Afghanistan comes as Washington is accelerating its efforts for a political settlement in the war-torn country before a possible withdrawal of the remaining 2,500 U.S. forces on May 1.

During the visit, both sides expressed their concerns over the increased violence in the war-torn country, the palace said.

President Ghani and the U.S. Secretary of Defence emphasised the need for a durable and just peace as the main solution for the current situation in Afghanistan, the palace added.

“I came to Afghanistan to listen and learn.

“This visit has been very helpful for me, and it will inform my participation in the review we are undergoing here with the U.S. president,’’ Austin wrote on Twitter.

Under the deal, the U.S. promised to withdraw all U.S. and international forces from Afghanistan.

In return, the Taliban vowed to cut ties with al-Qaeda and other terrorist groups and enter into intra-Afghan peace talks.

The Pentagon chief started his trip to Asia this week and arrived in Afghanistan after meetings in Japan, South Korea and India.

Austin, a retired four-star general, has been in Afghanistan before during his uniformed service.

Among others, he was responsible for all military operations in the Middle East and Afghanistan when he served as the Commander of U.S. Central Command.

Following 20 years of U.S. military involvement in the country, Biden has cast doubt on the withdrawal of U.S. troops from Afghanistan by the May deadline outlined in the Doha deal.

In an interview with broadcaster ABC, Biden said on Wednesday that the withdrawal could happen “but it is tough’’.

In response, a member of the Taliban negotiating team, Suhail Shaheen, warned on Friday that the violation of the agreement will have “a reaction”.

Meanwhile, the violence continues in the country on daily basis.

Despite ongoing peace talks between the internationally-backed Afghan government and the Taliban, the group is continuing to refuse a ceasefire.

A spokesman of the group told dpa on Sunday that they have shared a plan for violence reduction with the U.S. officials for a long time now, without elaborating the details of the plan.