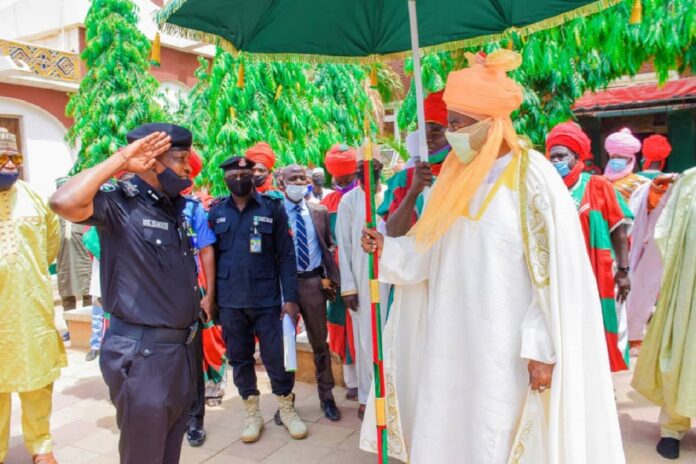 On the 02/03/2021, the 42nd Commissioner of Police, Kano State Command *CP Sama’ila Shu’aibu, Dikko, fsi* paid a visit to His Highness, the Emir of Kano Alhaji Aminu Ado Bayero.

2. CP Sama’ila Shu’aibu Dikko, fsi stated that, he visited the historical Royal Palace to introduce himself to the Emir and to seek for prayers, cooperation and fatherly advise as he was posted to Police Kano State. He further stated that, in this era Community Policing, he warned all officers of the Command to work diligently, respect Human Rights, Rule of Law and in accordance with international best practices. Having already obtained briefs from Kano State Governor, His Excellency Dr. Abdullahi Umar Ganduje, OFR, (Kadimul-Islam), he appreciates the Emir for his continued supports to Kano State Police Command.

3. In this remark, the Emir of Kano, Alhaji Aminu Ado Bayero, welcomed the CP to Kano State. Stating that he was much aware of the good work of the Police in Kano State. He urged the CP to work and contribute his quota in making Kano State safer and even more secured. Further stating that, as the 42nd Commissioner of Police of Kano State, he prayed for him to succeed as the other 41 also succeeded.

4. Also given a fatherly advise, Walin Kano, Alhaji Mahe Bashir, mni (DIG Retired) stated that, he retired from the Police Force in December, 1989 and having worked in different States in the Country, people don’t appreciate the work of the Police. Operate with fear of God Almighty, as only God will pay you for the sacrifices you have been doing to ensure that we are safer.