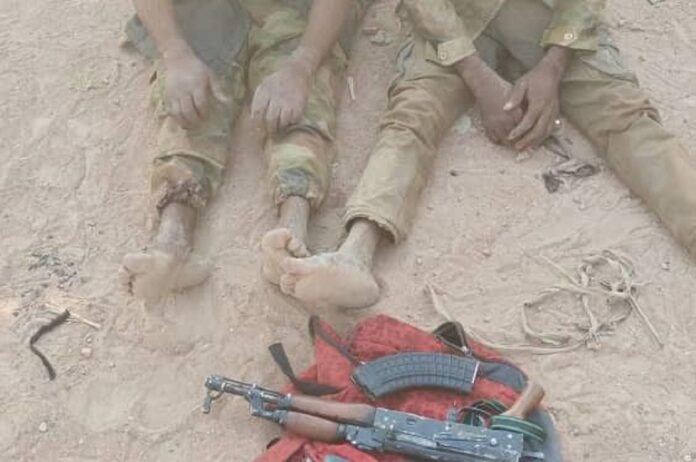 The troops also recovered one Ak47 during the operation.

Our correspondent gathered that OPWS troops deployed in Katsina-Ala raided a hideout in Dyom village near Senga community of the State.

Meanwhile a community leader from the village who identified himself as Elder Kpere Sona said the armed men dressed in military camouflage uniforms and were clearly identified as boys loyal to late Gana.

Sona who expressed surprise that the militia gang members after the death of their leader therefore expressed happiness that no one was killed during the attack on Dyom village.

Addressing newsmen on the attack on Sunday, Security Adviser to Governor Samuel Ortom, Lt. Col. Paul Hemba (rtd), condemned the attack just as he commented the timely intervention of the OPWS personnel which crippled their agenda.

He said the armed men had sneaked into the village and started shouting sporadically and burning down people’s houses.

“These were armed men in military camouflage said to be loyalists of the late Gana. They stormed the area and started destroying things before troops of OPWS arrived and two persons were arrested. It was not true that  three persons were killed by the criminals”, Sona stated.

When contacted, the Police Public Relations Officer, Deputy Superintendent, DSP, Catherine Anene said she had not received details of the incident.

It would be recalled that the State Security Council had last week imposed a dusk-to-dawn curfew on Katsina-Ala and Ukum LGAs to check the increasing cases of banditary, kidnapping and armed robbery as well as general insecurity in the two LGAs.