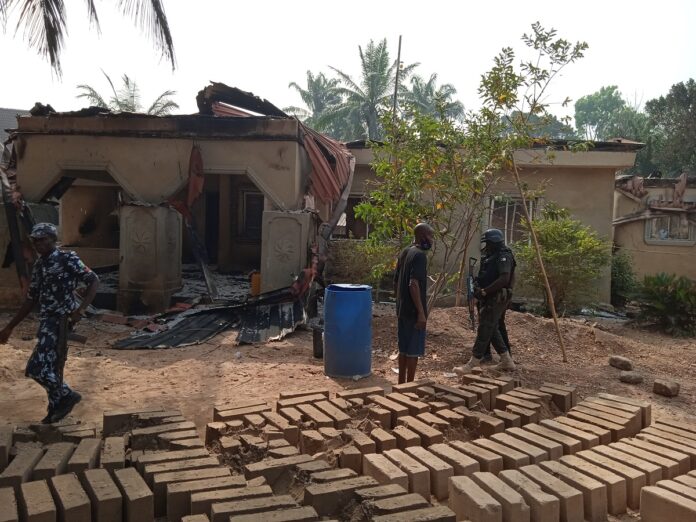 There was tension as one person was reportedly injured, over 35 houses and market were burnt by gunmen suspected suspected to be cultists in Oruku community, Nkanu East Local Government Area of Enugu State.

The incident was reported to have happened between 6:30pm Saturday evening and 7:30am Sunday morning.

Our correspondent who visited the community with the new State Commissioner of Police, Mohammed Aliyu, reports that some houses were still aflame on Sunday afternoon.

Only handful of people were sighted at the community as members were said to have fled for fear of being killed by the hoodlums that wielded AK-47 rifles and GPMG, shooting sporadically through the night.

247ureports.com reports that among the houses burnt were the palace of the traditional ruler of Aguikpa autonomous community.

A community leader and former Chairman of Nkanu East Local Government, Hon Ejike Ani, who conducted the Commissioner round the burnt houses, said he got the information that some group of people were going to attack the community and reported it to their Council chairman.

According to him, the Chairman Uchenna Nwobodo, assured him that he had informed the police but unfortunately, the community was attacked and over 35 houses and market were razed down by the attackers.

“I saw a post on the social media on the indigenous people of Oruku Facebook account that some natives have hired some people from Benue state and that Oruku community will be attacked in less than one week and less than one week we were attacked. I called the council chairman, Hon Uchenna Nwobodo and told him that this is what is happening. He said he has called the Divisional Police Officer of Amechi Idodo and you can see the end result.”

Narrating the genesis of the crisis, Ani said “We got a secular from the commissioner of police that all illegal arms should be handed over to traditional ruler for onward handover to the police division nearest. We held a meeting and in the meeting we agreed that we are handing over our arms.

“The 20 AK-47 rifles and Two GPMG guns we had along the line because of what has been going on with STS and our community, two AK-47 were returned and handed over to the State Director, DSS in 2020.

“So, some community members are still having 18 AK-47 and they are using those guns now to hunt the people that went for the peace process, the people that signed the agreement with Umuode community and people that told the government that this is the arms we have and we are ready to hand it over to government.”

On his part the chairman of Oruku neighbourhood watch, Mr Emmanuel Ani, appealed to both federal and state government for urgent intervention to rescue the community from those who have refused to give a peace a chance.

He blamed the situation in the community on the complicit of the Command Inspector General of Police Special Tactical Squad, DSP Kolo Yusuf, whom he said disarmed the neighborhood watch and released hoodlums they arrested and handed over to the police to continue to terrorise them.

“We couldn’t stop the carnage because we were disarmed by IG STS. They collected four plump actions given to us by the state government. So, it made us very handicapped in fighting the crimes in the community and that was why cultists are committing a lot of crimes here.

“As you can see more than 35 houses and 20 shops have been razed down by these cultists and their sponsors. This is only done last night. So the community is just helpless. We are just praying that God in his mercy will rescue this community.”

He lamented that his cousin’s house where he is living and his uncle’s house were completely razed down.

A widow, Mrs Nwatu, told the commissioner that the arsonists came to her house at about 6:30 pm, asked her to come out or they would burn her with the house.

“Immediately I came out they torched the house. Not even appeals that I am mourning my husband stopped them. They wanted to burn me inside the house. They burnt everything including our clothes,” she said.

Recalled that this is coming about one month the traditional ruler was shot dead by operatives of the Special Weapons and Tactical Squad (SWAT), on December 26, 2020 during annual general return meeting at the community’s Town Hall.

The killing of the community leader however, sparked anger that led to the burning of houses and other valuable property of those suspected to have conspired with the police in the murder.

But addressing journalists the Police Commissioner, Mr Aliyu, who described the incident as unfortunate, appealed to the members of the community for calm and allow police to investigate the cause of the violence.

“Unfortunately, before we got here because of the distance the hoodlums had gone.”

On some police officers and some powerful individuals who were accused of sponsoring the crisis, Aliyu said he would talk to the authority since those accused were at the Force Headquarters. “I am going to speak to the higher authority on more detail so that at the end of the day maybe more directives will be given.”

He however enjoined communities in the state to always provide useful information to the police and on time too, to avert situations that would lead to such wanton destruction of lives and property in their domain.