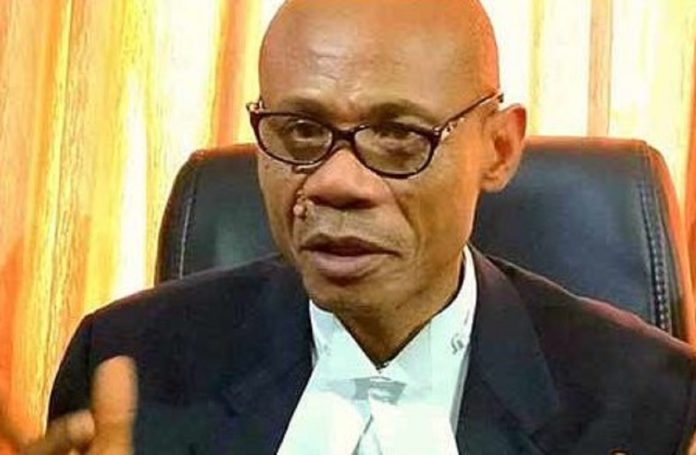 This song is very popular in burial processions of fallen comrades.”Comrade, dey pass Comrade”. It is the equivalent of the Christian hymn”We will only be remembered by our works”.

The recent passing of Barr. Uche Wisdom Durueke has dealt another deadly blow to the pro- human rights community.

Durueke was an all rounder, and was not found wanting in any area. His is a great testimony of the saying that” it is now how long we live, but how well. His activities equally reflect the quote that” service to humanity is the rent we owe for living on earth”.

Durueke will be remembered and celebrated doe multiple positive reasons. He was a lawyer and civil society activist. He was the President, Civil Liberties Organization (CLO) and the President, Centre for Peace Across (CePAB). Also, Durueke was in the Board of West Africa Network for Peacebuilding (WANEP) Nigeria as the Director of Publicity.

He was in the Steering Committee of the Nigeria Social Forum. He was the Focal Person for Citizens Forum for Constitutional Reforms, Imo State.He consulted for different non-governmental organizations and trade unions like:

Let me seize this opportunity to celebrate two other comrades that bestrode the earth in recent times.Bamidele Aturu, BF, as he was fondly called, was elected President of the Nigerian Students Union, and he emerged as one of the leading young voices against military rule in Nigeria at a time when it was dangerous to do such things. Yet, in 1987, he came out with a first-class degree and best graduating student. Armed with this qualification, BF undertook the compulsory National Youth Service Corps (NYSC), as a physics teacher at the Federal Government College, Minna, Niger State, where he earned a reputation as an exceptionally able, committed, and caring teacher. The management of the NYSC adjudged him as the best member of the NYSC 1987/88 set in Niger State.

As a result, he was penalised by the management of the National Youth Service, which refused to issue him with a discharge certificate. Without the discharge certificate, it was not easy for him to secure any employment. This compelled him to seek admission in 1989 as a law student, at the Obafemi Awolowo University, Ile-Ife. Again, BF graduated from the law programme as the best student in International Law and one of the best students overall. He was called to the Nigerian Bar in 1995. Aturu was one of the leading forces that resisted the regime of the late dictator, Gen Sani Abacha, through the instrumentality of United Action for Democracy (UAD).

He was one of the activists that contributed to the coalition of Civil Liberties Organisation (CLO), Committee for the Defence of Human Rights (CDHR) in 1989, and the Constitutional Rights Project (CRP) in 1991 to form the Campaign for Democracy (CD).

The world was treated to a rude shock when the death of Comrade Chima Enyinnaya Ubani was announced on 21st September, 2005. Ubani, the generalissimo of the struggle, until his demise, was the Executive Director (ED) of the Civil Liberties Organisation (CLO).

Ubani, and a photo journalist with Vanguard Newspapers, Tunji Oyeleru, lost their lives in a ghastly auto crash along Yobe-Pokistum road. The circumstances surrounding the crash is still shrouded in controversy, because we were told that there were other occupants of the Sports Utility Vehicle (SUV) whose identities were never disclosed.

Due to the anti-people policies of the President Olusegun Obasanjo’s regime, including incessant hikes in fuel prices, the labour movement and civil society groups coalesced to form what was then known as Labour and Civil Society Coalition (LASCO).

LASCO was undertaking rallies across the six geo-political zones in the country, protesting the fuel price hike, and had just concluded the North-east geo-political zone at Maiduguri. Ubani was to travel by air, but under circumstances which are also not still clear, he was reported to have opted to travel by land. The grand finale of rallies was scheduled to hold at Abuja, the seat of power, which LASCO would have occupied for days.

Chima Ubani, a former Amnesty International Prisoner of Conscience, died at the age of 42. He was son of a Seventh Day Adventist (SDA) pastor, late Friday Okoro Ubani and Mrs Eunice Nnem Ubani of Obete-Umuoha in Obingwa Local Government Area of Abia State. Ubani, like Aturu, demonstrated high intellectual capability. He was a students’ union leader at the University of Nigeria, Nsukka (UNN), where he graduated in crop science in 1988. He took an MA in Mass Communication from the Leicester University in 2002. He joined the Civil Liberties Organisation in 1990 as a researcher.

My last appeal: let the invaluable contributions of these fallen comrades go in vain.