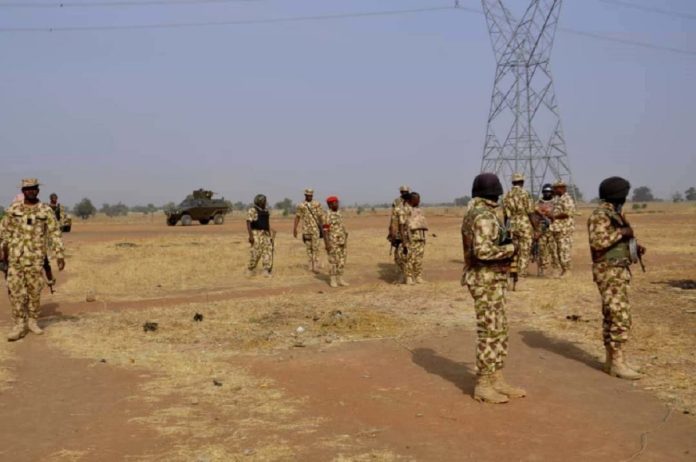 Gallant troops of 232 Battalion of 23 Armoured Brigade  under Operation LAFIYA DOLE deployed in Garkida, Gombi LGA of Adamawa State had thwarted a planned criminal attack on the peaceful town on 21 February 2020 by some criminal Boko Haram Terrorists. The terrorists besieged the town in about 7 Gun Trucks and a number of motorcycles setting some buildings ablaze and causing unrest within the community. Instinctively, the gallant troops mobilized and intercepted the criminals’ advance and engaged the marauding criminals unleashing high volume of fire leading to the elimination of several of the criminals while others withdrew in disarray, many of them with gunshot wounds as evident in the trails of blood along their withdrawal route.

Regrettably, one gallant soldier paid the Supreme price while another soldier was wounded in action. The wounded in action soldier has since been evacuated to a military medical facility and is positively responding to treatment.

Consequently, following the successful repelling of the criminals, today the 22nd February 2020, the Commander 23 Armoured Brigade, Brigadier General Sani Gambo Mohammed visited the gallant troops in Garkida and toured the locations of the attack for an on the spot assessment. At the end of his tour, he congratulated the troops for their doggedness, vigilance and uncommon fighting spirit that led to the victory against the enemy. He however admonished them to be more vigilant as the criminal elements may plan a reprisal attack due to the casualties they suffered. Additionally, the Brigade Commander also solicits the citizens’ continuous cooperation in reporting to security agencies any suspicious persons or movement within and adjourning communities. He further reassures the good people of Garkida and indeed Adamawa State the Brigade’s total commitment to protecting lives and properties within its Area of Responsibility.