Home Press Releases Punch And The Culture Of Hate Mongering 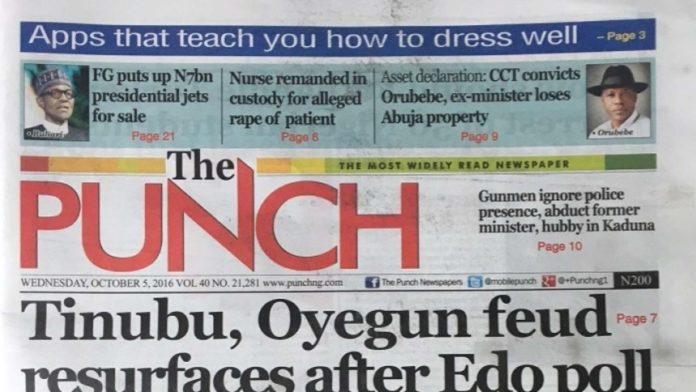 Our attention has been drawn to an Editorial of the Punch Newspaper of Wednesday 12th December, 2019 in which the paper successfully managed to expose its morbid hatred for President Muhammadu Buhari and the Government he heads. This is coming on the heels of the spirited attempts by Punch Newspaper to influence the 2019 elections through jaundiced reportage and several opinion pages that were aimed at discrediting the President and his Government. Beyond just the attempt by the Newspaper to discredit Mr. President, it has progressed from just expressing hatred for the President to inciting the public through the invocation of derogatory means that instill fear to insurrection. Imagine this statement “Nigeria has had more than its fair share of draconian rulers, whether in military or civil garb, but none has succeeded in breaking our resilience and irrepressible spirit”. This is outright manipulation of a situation with a sinister motive meant to spark outrage which borne semblance and emblem of revolution now proponents. These are inciting statements and should be treated as such.

Because Nigerians are peace loving and would not do the biddings of the Punch and those they are in cohort with, it disdainfully label Nigerians ‘lethargic’. This is really unfortunate. For a paper that said it is protecting the interest of Nigerians on the basis of which it labelled the President a dictator to refer to the same people it purports to protect as lethargic is irresponsibility taken to a new height never known before in this country. Nigerians are no fools. They know those who love them. No amount of blackmail will force Nigerians to do what ordinarily they will not do.

It is pertinent at this juncture to ask: does Punch and several other vocal minority groups in Nigeria think they can undermine the silent majority believing that they alone have monopoly of knowledge of right and wrong?

It is obvious from the position of the Paper that it is now a partisan entity in cohort with the opposition whose intention is to snatch the mandate freely given to the President by Nigerians. This intent is obvious from the drive to cast the President in a military garb that will portray him as a dictator. To drive home the point, the Paper promised to refer the President as a Military General and his Government a Regime, meaning an authoritarian government. These were the exact words used by the advocate of the so-called revolution facing trial. It is now obvious that the call for a Revolution had been an idea beyond the proponents whose faces are known to Nigerians.

Our position is solidified by the common thread and position that connect the Editorial to some media outfits and opposition political personalities. A relatively unknown online publication, the Signal Newspaper, came up with its own version where it informed the general public that “we shall henceforth address President Muhammadu Buhari with the prefix: ‘Dictator’ in all our publications.”  It is emerging that there is a deliberate attempt from the part of those that are against the progress being made since Mr. President assumed office to cash in on Omoyele Sowore’s self-inflicted travail to destabilize the nation. The linkage is becoming clearer by the day.  Is it not curious that the Speaker of Oyo state House of Assembly equally issued a statement in support of the Punch editorial?

We the silent majority wish to put them on notice that our silence in no way represent weakness or incapacity to provide support to the President in the most forceful manner. For a start, we wish to call on all those who support the President to as a matter of course boycott all Punch publications. None of us will glorify their paper with our eyes as readers or with our resources as advertisers. We shall continue this boycott, continue to mobilize others to boycott the paper until they recant from their dubious journalism of hate mongering, incitement and abuse of privilege.

Those who are bent on destroying this country because of their morbid hatred for an individual or groups of individuals are surely bound to fail. Nigeria is greater than all of them. No amount of blackmailing and incitement will move Nigerians to destroy the only country we have. We are quite aware of what the people of Rwanda went through.

The future of this great nation is in the hands of God Almighty and not some selfish and self-confessed purveyors of destructive divisions within the polity. They can continue their posturing and hate mongering as they did in the past four years of the Buhari Government, but they will never succeed in breaking the spirit of the Nigerian people committed to remaining together as one indivisible country. All they have succeeded in doing so far is embarrass the country and expose their contempt for the President and the Nigerian people who freely elected him to lead them to fight corruption and retrieve Nigeria from the hands of the corrupt.

Enough of this hate campaign!