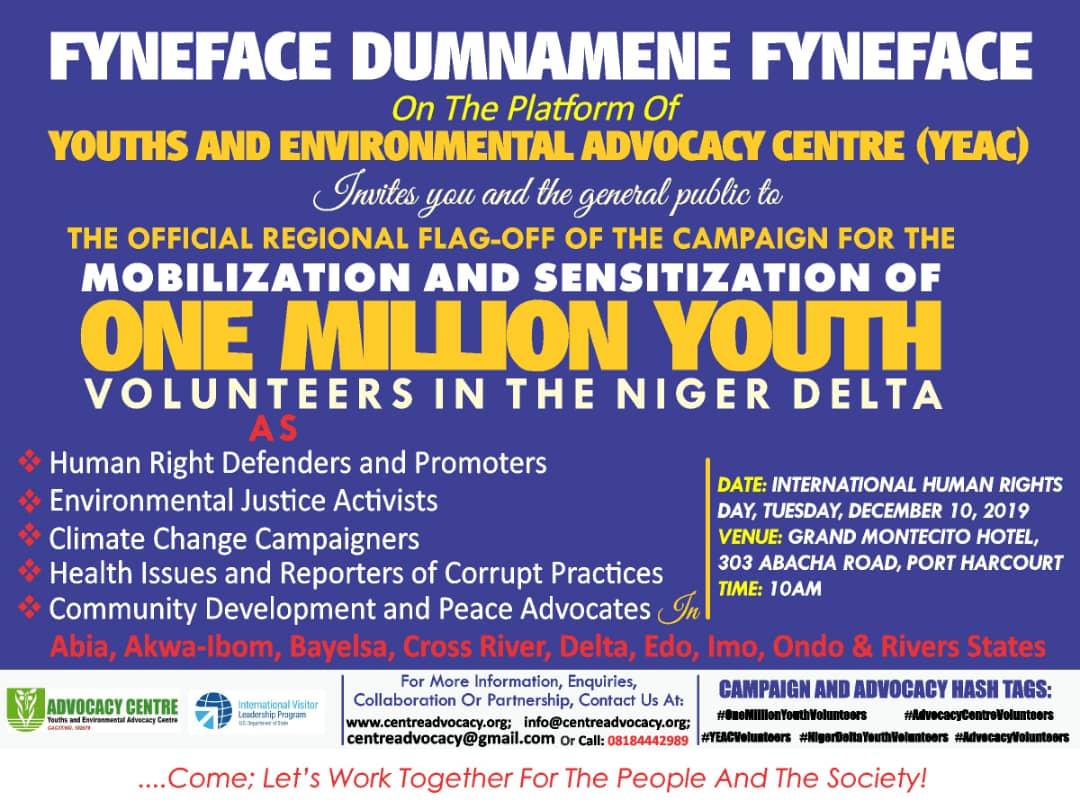 The One Million Youth Volunteers would be mobilized from Abia, Akwa-Ibom, Bayelsa, Cross River, Delta, Edo, Imo, Ondo and Rivers States to also work with Advocacy Centre as environmental justice activists, climate change campaigners, community development, peace advocates as well as reporters of health issues and corrupt practices that contribute to underdevelopment in the region.

It is worrisome that, despite the resources accruing to the Niger Delta region: from 13% derivation funds to State governments to the Niger Delta Development Commission to the Ministry of Niger Delta Affairs to the Presidential Amnesty Program to the Hydrocarbon Pollution Remediation Project among other interventionist efforts of the federal government, there is still a general lack of development in the region. This affects the rights and living conditions of the people of the Niger Delta due to institutional corruption, decades of neglect, bad governance, mismanagement and embezzlement of public funds by some political office holders. Thus, these one million youths will work to monitor rights violations, hold governments to account and contribute to ongoing developmental efforts of the leaders at all levels aimed at addressing and tackling the Niger Delta challenges through volunteerism. We strongly believe that there is power in unity and reward in performing selfless service to the people and the society. We believe that while the leaders lead, the One Million Youth Volunteers’ network will work as a self-help alternative development platform to contribute to the development of the region and the Lord would bless the work as the Bible says in Judges 5:2 “THAT THE LEADERS LED IN ISRAEL, THAT THE PEOPLE VOLUNTEERED, BLESS THE LORD” (New America Standard Bible).

The mobilization of this One Million Youth Volunteers would also help address issues around lack of trained new generation of human rights defenders and activists in the Niger Delta, Nigeria and globally. We recall for instance, the worries and regrets of past generations of human rights defenders in the Niger Delta especially Ken Saro-Wiwa before he was killed with eight others in 1995. Ken Saro-Wiwa had stated in parts, in a communication later published in 2013 in a book titled “Silence Would Be Treason-The Last Writings of Ken Saro-Wiwa” that “One source of worry is what will happen to our struggle when Ledum and I are put away. We had not had enough time to train the cadres or put alternative leaderships in place…”

Comrade Fyneface Dumnamene is leading Advocacy Centre and Niger Delta youths on these advocacy and human rights defense journey as a “new generation that fights for a pollution free future for the Niger Delta people as acknowledged and published by Amnesty International in a 2015 Report (available online here: http://bit.ly/361rdc2). In 2017, he got the inspiration to mobilize One Million Youth Volunteers to join him to promote human rights, environmental and social justice for the indigenous people of the Niger Delta and Nigeria at large and first hinted the world about it in an interview with FAIRPLANET, Germany in 2018 (available here https://bit.ly/2oOR3QJ)”. However, the motivation to actualize this mobilization of One Million Youth Volunteers for community development in the Niger Delta was strengthened after learning about how American people are using volunteerism to contribute to development and raising the profile of their communities. This is obviously evident especially among the known indigenous peoples of U.S States of North and South Dakotas as demonstrated in Standing Rock, Thunder Valley Community Development Corporation in Pine Ridge, Crazy Horse Memorial and Feed South Dakota, etc. which he learnt about during his participation in the weeks’ long American Government Professional Exchange Program, the International Visitor Leadership Program (IVLP) in 2018 through which he was mandated to return home and contribute to development by “Strengthening Community-Based Advocacy in the Niger Delta through Multi-Stakeholder Engagement”.

The strategies that Advocacy Centre would use for the mobilization of the One Million Youth Volunteers would include media advocacy, social media campaigns, One-On-One advocacy, neighbourhood and campus mobilizations by traveling around the nine States of the Niger Delta, visiting some Senior Secondary Schools, Colleges, Universities, Polytechnics, Monotechnics and Colleges of Education for sensitization and spreading of human rights education among students and the people; share information about the project and its objectives for interested youths to register on the database through Short Code available on MTN, Glo, Airtel and Visa Phone.

Fyneface Dumnamene and Advocacy Centre would join hands with the One Million Youth Volunteers and collectively work towards the establishment of a Niger Delta Cultural Park where our cultural values, heritage, works of our heroes, their legacies, and monuments will be displayed, preserved and showcased to the world as a resource and tourist centre”. We believe that this initiative would also create jobs for our youths through volunteerism and the proceeds used to advance charity works in the Niger Delta, Nigeria and contribute to global needs.

The One Million Youth Volunteer would work to build bridges that connects our today to legacies of our heroes past and links our cultural heritage with our future as an indigenous people of the Niger Delta.