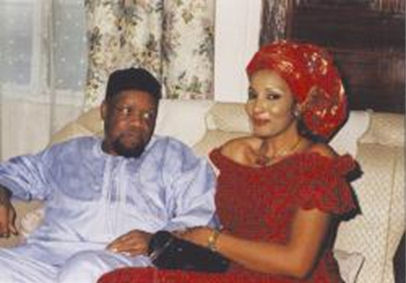 This publication was originally published in 2011.

A disheartening crisis appears wickedly at the doorsteps of the number one citizen and contemporary hero of the modern Igbo society. For the family of the strongman and legend of Igbo land, Chief Odimegwu Ojukwu, a source confides, life appears brighter on the outside than it really is on the inside. Authoritative information available to 247ureports.com confirms that the king of modern Igbo politics and the modern Igbo project, who has been on Intensive Care Unit [ICU] since February 8, 2011, may be on the last lap of his journey on Earth. His present health condition has continued to worsen near a point of no return.

His youngest and latest wife, Bianca Ojukwu’s sudden leap into the national political theater amidst her husband’s failing health has raised eyebrows among core Igbo traditionalists and has served symptomatic of what the marital relationship between the two may have dwindled to. Traditionalists who are of the belief that a wife of a dying man should be by the side of the husband to tend to him believe also that Bianca Ojukwu has erred in her abandonment of the Igbo legend.

Bianca’s quick action to pack her new fiancé, Honorable Commissioner Robert Okonkwo, into her marital home in Enugu has unsettled many within the Ojukwu family. Robert Okonkwo is a 37year old blood relative to Odimegwu Ojukwu who serves under the Peter Obi administration as the commissioner for special duties and transport – a post previously held by Chukwuemeka Odimegwu Ojukwu [Jr]. Robert Okonkwo was Bianca Ojukwu’s choice for the post after Ojukwu [Jr] resigned. Robert Okonkwo presently commutes to work from Ojukwu’s home in Enugu. Knowledgeable folks who could no longer remain mute tell 247ureports.com that Bianca Ojukwu’s actions are not without reason.

They say she has questions to answer.

On February 9, 2011, Mrs. Bianca Ojukwu signed her offer letter for the position of Special Advisor to the President on Diaspora Affairs following hotly contested debate within the Ojukwu nuclei family over whether to accept the offer by President Goodluck Jonathan. Family members tell 247ureports.com that Ezigbo gburugburu, Chief Ojukwu did not assent to the offer when it was made by the President personally at the home of Ezigbo at Enugu, the capital of Enugu State.

The President [Jonathan] had paid a personal visit to Ezigbo prior to the onset of his health crisis during the period leading up to the presidential primaries of the Peoples Democratic Party [PDP]. The purpose of the visit was to intimate Ezigbo of his desire to employ his wife as a Minister to replace the vacant slot left by the exit of Prof Dora Nkem Akunyili at the post of Minister of Information and Communication. Ezigbo was said to have received the President well but rejected the idea of offering his wife a ministerial job. Ezigbo, who did not support the idea, found it a bit denigrating to have his wife serve the President. Ezeigbo noted that it would not serve the Igbo interest well. He also did not want his wife’s servitude to cage him and his utterances. Ezigbo made his concerns clear to the President. Bianca being unhappy continued her lobbying of the Presidency for the post.

The President’s men backed off the idea but the incident of December 1st 2010 at the Ojukwu home changed everything for the Presidency, for Bianca and for Ndigbo.

The early morning of December 1st 2010 greeted Ezigbo with a stroke.

Ezigbo gburugburu was struck by a massive stroke. At home at the time of the incident were Bianca, her new lover [Mr. Robert Okonkwo] and some housekeepers. Reacting, Bianca called on two of her personal medical Doctors [names withheld] to come to the house to attend to Ezigbo. Both medical doctors arrived almost immediately to the house and began administering treatment to Ezigbo. Ezigbo was not taken to the hospital.

While the medical duo administered treatment, Bianca who was with her lover, Mr. Okonkwo did not inform the immediate relatives of Ezigbo – of Ezigbo’s deteriorated condition. The immediate family did not become aware till December 6, 2010 – 5 days after Ezigbo was struck. And when the family became aware, they immediately raised an alarm over the choice of Doctor – citing that the same Doctor had treated one of Ezigbo’s cousins – resulting to a wrongful death and litigation between the Ojukwu family and the Doctor. They also raised alarm over the “home treatment” being administered. In their take, a stroke victim/patient ought to be treated at the hospital. [Dr. Ojukwu, the elder brother to Ezigbo, who is a well-respected medical doctor in the area, was not made aware of Ezigbo’s health crisis.] The mismanagement of Ezigbo’s medical upkeep, at this point became open to the Ojukwu family. And in retort, Bianca took a stand and banned many of the family members from visiting or having a say in quelling the unfolding saga. She insisted on having Ezigbo remain at the house and for her personal Doctor to continue making daily house visits. And so, no cat-scan or other required medical procedures were performed on Ezigbo.

Ezeigbo’s system shutdown and he stopped breathing. Panic took the ambiance. The immediate family took over the mantle from Bianca and immediately began to make arraignments to transport Ezigbo to University Teaching Hospital, [UNTH] Enugu. Lifting of Ezigbo from the top floor of his home down to the lower floor – where the entrance and exits were – was not an easy or happy task due to the nonexistent medical supplies or equipment at the home. Ezigbo had to be carried on a mattress down the stairs and onto the ambulance. His physical state told a story that was vividly horrid, hygienically. His nails were badly overgrown and his body reeked of a toxic stench.

The trip to UNTH told another saddening saga. The elder brother to Ezigbo who up till December 19, 2010 was not aware that his younger brother was having a life threatening crisis, had coincidentally arrived at UNTH for another purpose – only to be surprised by his colleagues who told him of his brother’s condition.

It was also at this point that the political juggernauts seized the opportunity to cash-in what available currencies they found in Ezigbo gburugburu. Top on the list was the Governor of Anambra and the “political godson” of Ezigbo, Mr. Peter Obi. Gov. Obi immediately became “publicly concerned” over the health of Ezigbo. He started to guarantee airlift to a European country for treatment. But Bianca refused him entry into the house following an earlier misunderstanding. Governor Peter Obi was halted at the gate by security men as he tried to gain entry into the Ojukwu’s home. Bianca and Peter Obi had been on a tussle on how to pay for the airlifting. Peter Obi is reported to have been reluctant to release the required funds to facilitate for the airlift because he already disburses N15million monthly of Anambra State funds to Bianca for the upkeep of Ezigbo.

Arrangements for the airlift was said to have begun on the 6th of December 2010 [the day the family became aware], but Peter Obi, who had told the President [Jonathan] that he will carry the cost – was not as forthcoming. The family opted for an alternate means. And so, an air-ambulance from South Africa was dispatched to Enugu via the assistance of some South East philanthropists. However upon the Jet’s arrival, Peter Obi gave orders that Ezigbo should not be flown on that aircraft because he has already made arrangements. Ezigbo was now kept at the hospital till December 23, 2010 [additional four days] when Peter Obi’s arrangement arrived.

On the day of the airlift, the saddening display of greed and selfishness continued its odorous fermentation. As the airbus arrived and began to taxis into the marked area. Peter Obi, Bianca Ojukwu, Robert Okonkwo and others were in their respective corners inside the airport lounge being entertained. As Ezeigbo was wheeled to meet the air-flight medical team, Peter Obi, Bianca Ojukwu, Robert Okonkwo remained inside the lounged. The Unclad body of Ezeigbo which was only partially covered by the bedspread given to him from UNTH Enugu was handed over to the foreign medical team without Peter Obi or Bianca Ojukwu present. None of the political juggernauts assembled at the lounge made efforts at covering up Ezigbo gburugburu. When the air-ambulance was ready for takeoff, Bianca Ojukwu pleaded for her lover to be allowed onto the air ambulance. She was shunned.

Enugu UNTH Doctors uncover the cause…

An unpleasant twist to the sad tale comes through an interesting medical check from the physicians at the Enugu Hospital that point to a possible neglect and probably mischief on the part of both Bianca and her personal doctor. The medical examination conducted on Chief Chukwuemeka Odimegwu Ojukwu indicated that high levels of heavy metals were introduced in his system. In particular, Sodium [Na+] levels in Ezeigbo’s system were reported to be 10 times its toxic limit. The medical examiners pointed to the Medical Drips administered to Ezigbo at home by Bianca’s personal doctor – as containing abnormal levels of Sodium. The high level of Sodium was found the cause of Ezeigbo’s coma of December 19, 2010.

One of the primary Doctors who attended to Ezeigbo at the Enugu UNTH told 247ureports.com Bianca’s refusal to admit her husband to a facility for full medical and comprehensive care – primarily, laid the grounds to Ojukwu’s latest crisis. He explains that the high dose of Sodium in Ezeigbo’s system was because of the wrong medicines administered by Bianca’s personal Doctor. In particular, he marked the type of DRIPs used by Bianca’s Doctor on Ezeigbo as being highly suspect…especially for a stroke victim. “In a more advanced country, Bianca would be a person of interest to the investigative authorities by now”, added the Doctor.

Interesting also is the Presidency’s reaction towards Ezeigbo’s illness. Without delay, the Presidency, fully aware of Ezeigbo’s rejection of President Jonathan’s job offer of a ministerial post to Bianca, reoffered Bianca a post in the Presidency – the position of a Special Advisor to the President on Diaspora Matters – a position lower than the original offer.

Bianca jumped on the offer.

[Stay tuned: How Bianca physically fought Ojukwu over control of his personal finances]