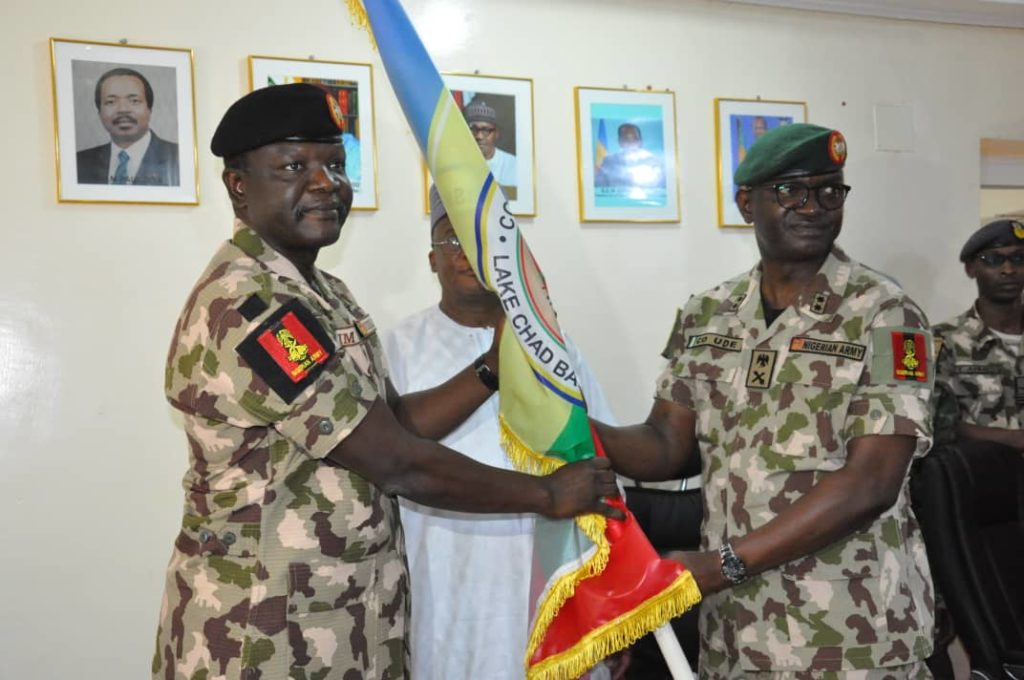 Maj.-Gen. Ibrahim Yusuf has taken over as the 6th Force Commander of the Multinational Joint Task Force (MNJTF) in N’Djamena, Chad.
The Chief of Military Public Information, MNJTF, Col. Timothy Antigha, disclosed this in a statement made available to the News Agency of Nigeria (NAN), on Tuesday in Abuja.
During the handing over ceremony, the Executive Secretary, Lake Chad Basin Commission and Head of Mission MNJTF, Amb. Mamman Nuhu congratulated the former Force Commander, Maj.-Gen. Chikezie Ude for successfully completing his tour of duty.
Nuhu said that the most significant achievement of MMJTF under Ude was the continuous mobile operation concept, which was approved by the Heads of State and Government of Troop Contributing Countries.
He added that the new Force Commander was not new to the mission, having distinguished himself as the General Officer Commanding 7 Division, Nigerian Army.
Also, the Special Representative of the African Union Commission Chairperson, Amb. Zaina Nyiramatama, commended Ude’s efforts in dealing with the military and security threats constituted by Boko Haram Terrorists and wished the former commander success in his future endeavours.
In his remarks, Maj.-Gen. Ude thanked the Head of Mission, Troop Contributing Countries, African Union and strategic partners for sustaining their support for the MNJTF throughout his tour of duty and urged same support for his successor.
He commended the discipline, dedication and steadfastness of MNJTF officers and soldiers and prayed for the repose of the souls of personnel who paid the supreme price.
While addressing the troops, the new commander, Yusuf stressed the need for teamwork and collaboration between Troop Contributing Countries and promised to work in close harmony with the Lake Chad Basin Commission.
He charged officers of the MNJTF to sustain cohesion of the force by building mutual trust.
He also assured all the stakeholders responsible for the restoration of peace and security in the Lake Chad Basin region that the MNJTF will sustain and enhance all existing collaborative frameworks.