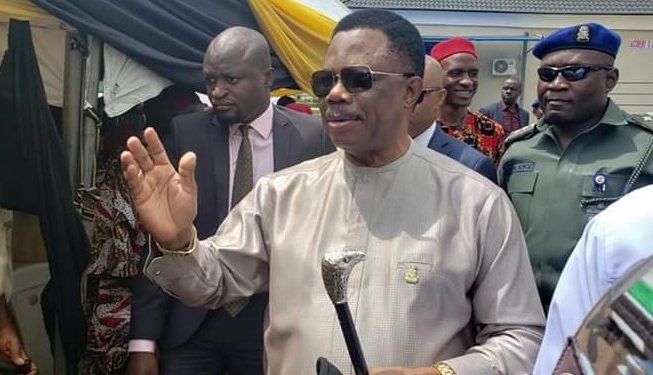 Onitsha – Governor Willie Obiano of Anambra state has directed operatives of various security agencies, including the state vigilante group to carryout massive operations aimed at ridding the state of cultism and drug addiction within this ember months, to ensure a hitch-free yuletide season in the state.

Obiano who gave the directive at the weekend at New Era Girls Secondary School, Onitsha, during the launching of the prestigious Agbalanze Cultural Association of Onitsha and remembrance ceremony of members of the association, dead and alive, noted that the high incidences of cultism and drug addiction have become too inexplicable that that government has decided to tackle the menace head-long.

Obiano who was represented at the occasion by Chief Ikechukwu Ayo Aduba, NPM, PSC+, FCIDA(Ghana), JP, a retired Commissioner of police and the incumbent Chairman,of Anambra State Vigilante Supervisory Committee,however advised parents to ensure that their children or wards did not fall victim at this period when the massive operation rid the state of social vices and undue violence is expected to take place soonest.

The Governor congratulated members of the Agbalanze Onitsha society for keeping the culture afloat and urged them to use their high positions to improve the society for a better tomorrow.

The Obi of Onitsha, Igwe Alfred Nnaemeka Achebe who unveiled the plaque at Agbalanze Secretariat as the Royal Father of the day, commended them for their role in preserving the cultural heritage of Onitsha and charged them to keep the flag flying.

In a related development, Aduba who is also the Senior Special Assistant to Governor Obiano on Vigilante Matters, has commended Governor Willie Obiano for his unrelenting support for grassroots security since the inception of his administration and promised a crime-free yuletide as usual.

Aduba who was among the eight persons selected to represent the state in a week-long intensive security seminar organized by the Directorate of State Security (D.S.S.) at the National Institute of Security Services (N.I.S.S.), Abuja, charged his men to be at alert at this critical period and always collaborate with the Police while shunning any illegal action capable of tarnishing the image of A.V.G.,

In a press statement he issued in Onitsha, Aduba noted that the seminar, with the theme: “Managing Internal Security For Good Governance And National Development”, was specifically organized for Security Administrators.

According to the statement,, a security workshop would also be organized in the three Senatorial Districts on security education for non-state actors at the grassroots level namely Central Vigilante, Neighbourhood Watches, Market and Village Vigilance Groups before the end of the year.

He also urged public spirited individuals in the 189 Communities to support security operations, even as he confirmed the appointment of Chief Etukokwu Alex, the proprietor of Top Ten Hotel, Oba, Idemili South Local Government Area of the state as Ex-Officio member of Anambra South Zone of Anambra State Association of Vigilance Groups (ASAVG).

He further noted that this appointment was in recognition of Chief Etukokwu’s philanthropic gestures and unqualified assistance to A.V.G, adding that other affluent men and women in the society should support A.V.G. in their communities since according to him, Government cannot do it alone.