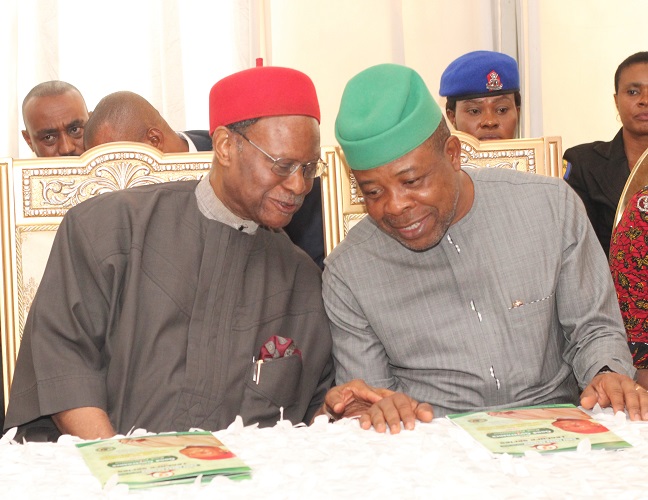 Imo State Governor, Rt. Hon. Emeka Ihedioha CON, has said that the state through the genuine and proactive efforts of his administration is gradually regaining its pride of place as a state that holds bright future for the youths and its entire citizens.

The Governor urged the youths of the state to emulate notable role models who have through their ingenuity and accomplishments, left lasting legacies in the history of mankind.

Governor Ihedioha who gave the charge at the 9th Chief Emeka Anyaoku Lecture Series on Good Governance, with the theme, “Youth and challenges of Nation Development”, held at Art Nouveau Event Center, Owerri, Thursday, also enjoined the youths to encourage themselves for a better tomorrow.

He said there is no way the youths can attain greater heights if they are not inspired, adding, that their individual and collective inputs in the present society would always determine their future, that of the state and the nation in general.

He described Chief Anyaoku, former Commonwealth Secretary-General, as a man who in all ramification, is a role model, great mobilizer and an accomplished Nigerian with exceptional leadership pedigree.

The Governor maintained that as the nation marches into another decade of developmental strides, the need to emulate Chief Anyaoku to challenge and inspire the present and coming generation of leaders on good governance becomes pertinent.

The chief celebrant, Chief Anyaoku, in his remarks, described Imo as one of the luckiest states in the country that has as its governor, a man with sterling leadership qualities.

“I must say that in all the states in the country, I count Imo State as one of the fortunate ones in having as its chief executive, a man who has made his records an enviable one. Governor Ihedioha is a man in whom I am quite sure, will place the confidence of good things ahead of the state.” Chief Anyaoku said.

Keynote speakers at the Lecture, Dr. Reuben Abati and Sen.Shehu Sani tasked government on the need to put in place policies that will drive youth empowerment and development.

They urged the youths to eschew the spirit of get rich quick and imbibe hard work which propelled the celebrant to excel in his youthful days. Dr. Abati expressed regret that 65% of over 80 million youth population in the country is unemployed, while 25% of the youth population is underemployed.

This he said poses serious danger which is capable of generating tension and crisis in the country.