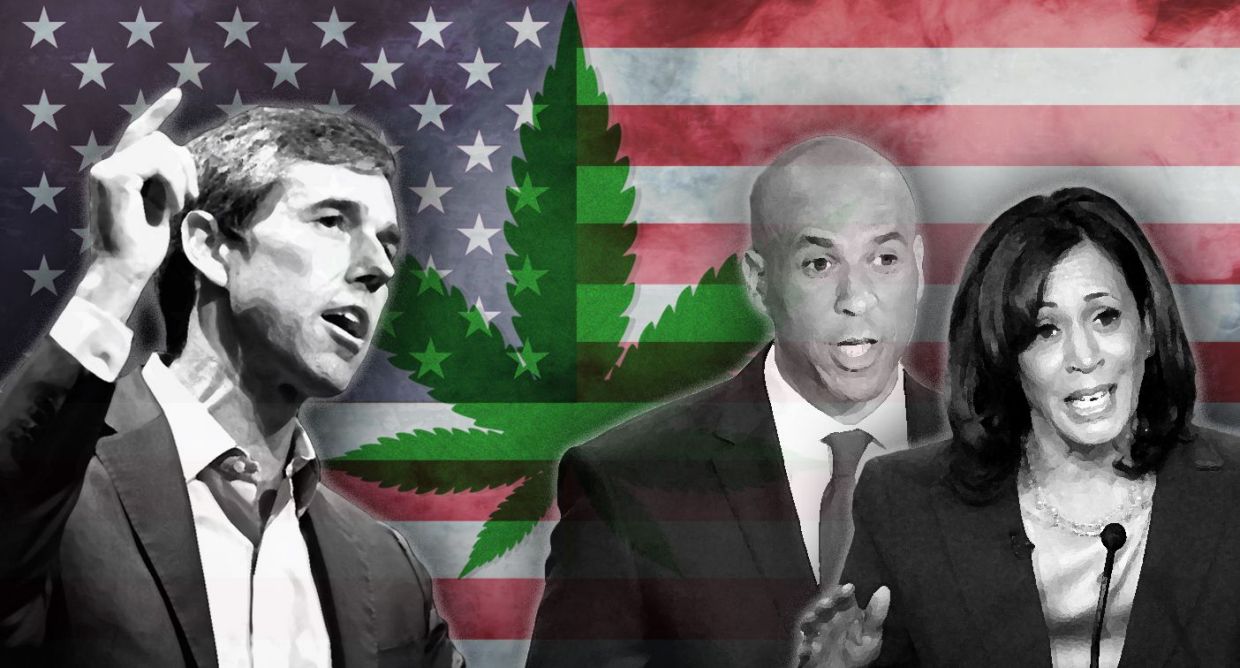 Yahoo News will be examining these and other policy questions in “The Ideas Election” — a series of articles on how candidates are defining and addressing the most important issues facing the United States as it prepares to enter a new decade.

Study after study shows that the war on drugs has disproportionately targeted minority communities, leading to an increase in the prison population and a reduction in voting rights. Black people are 3.73 times more likely than white people to be arrested for simple marijuana possession, and almost 80 percent of federal prisoners serving time for drug offenses are black or Latino. Overpolicing and increased incarceration result in disenfranchisement, with one in 13 black people in the country ineligible to vote due to felony records (more than four times the rate for whites). These arrests also have an economic impact that falls disproportionately on minorities. And thousands of people are deported every year for marijuana possession.

This is despite the fact that marijuana is a relatively safe drug used by millions of Americans that over the course of this decade has been made legal for recreational use in 11 states and the District of Columbia. The fact that possession and sale remain federal crimes has created a legal gray area, meaning that banks are wary of working with legitimate businesses. Other states have taken the interim step of decriminalizing the drug, removing jail time for possession, and two-thirds of states allow it for medical purposes. In 2018, Attorney General Jeff Sessions announced plans to step up federal enforcement of marijuana laws, including in states where it was legal, but backed down after Sen. Cory Gardner, R-Colo., threatened to hold up all Department of Justice nominations.

Congress passed the Marihuana Tax Act of 1937, which put a tax on cannabis but kept it legal. In 1970, President Richard Nixon passed the Controlled Substances Act and classified marijuana as a Schedule I drug, along with LSD and heroin. This classification meant that marijuana was judged to have no medical value and considered more dangerous than cocaine and methamphetamine, with “a high potential for abuse.” In January 1971, Nixon launched a war on drugs, which resulted in a tenfold increase in the American prison population over the ensuing decades. Nixon aide John Ehrlichman later admitted that the policy was intended to target two of the White House’s enemies: the antiwar left and African-Americans.

“You want to know what this was really all about?” said Ehrlichman in a 1994 interview that was published 22 years later. “The Nixon campaign in 1968, and the Nixon White House after that, had two enemies: the antiwar left and black people. You understand what I’m saying? We knew we couldn’t make it illegal to be either against the war or black, but by getting the public to associate the hippies with marijuana and blacks with heroin, and then criminalizing both heavily, we could disrupt those communities. We could arrest their leaders, raid their homes, break up their meetings, and vilify them night after night on the evening news. Did we know we were lying about the drugs? Of course we did.”

In 1996, California passed Proposition 215, becoming the first state to authorize marijuana for medical purposes. Other states followed, and in 2012, voters in Colorado and Washington approved ballot initiatives legalizing recreational marijuana for adults 21 and over. California, Oregon, Nevada, Alaska, Illinois, Michigan, Massachusetts, Maine, Vermont and the District of Columbia also legalized the drug for adults. Additionally, 33 states plus the District of Columbia allow marijuana for medical purposes.

Most of the Democrats competing in the 2020 primary have come out for the legalization of marijuana, regulating and taxing it like tobacco or alcohol. A few of the candidates have gone even further, pushing for clemency — and even reparations — for those with past convictions for nonviolent drug offenses.

Sen. Cory Booker is a longtime advocate for legalization. In February he put forward the Marijuana Justice Act, which would legalize the drug nationwide and also include, per Booker, “community reinvestment provisions like job training for areas hardest hit by the failed drug war — to make them more economically vibrant, fair and just. Let’s make marijuana legal but also invest in undoing the damage done by a war gone horribly wrong.” In June he introduced a plan that would offer clemency to over 17,000 inmates who are in prison for nonviolent drug-related offenses.

“I get angry when I see people taking just one step — legalizing marijuana — without doing anything to address past harms,” said Booker in a May interview with Rolling Stone. “Suddenly, you’re legalizing marijuana, and all of these people, who used marijuana in the past but were never caught, are lining up to get business licenses, who are not diverse — in the very communities that are black and brown and low-income, where there are people who wanted those business opportunities but aren’t getting them because of past convictions, or because they don’t have capital to start businesses.”

Former Texas Rep. Beto O’Rourke announced a plan last week that wouldn’t just free those serving time for marijuana offenses but would also provide reparations for sentences in the past. O’Rourke is proposing clemency and expunging the convictions of those serving sentences for simple possession, and establishing a board to review convictions for other offenses, such as sale.

Another part of O’Rourke’s plan is what his campaign is calling “Drug War Justice Grants,” funded by federal taxation on marijuana with the proceeds going to those “formerly incarcerated for nonviolent marijuana offenses in state and federal prison for a period based on time served.” O’Rourke would also attempt to help those most affected by drug enforcement through the business opportunities made newly available by the legalization of weed. His plan would waive licensing fees for producing, distributing or selling marijuana for individuals below an income threshold and with previous convictions for marijuana offenses, while ensuring that a majority of licenses go to minority-owned businesses and “those disproportionately impacted by the war on drugs.”

O’Rourke’s plan would also end the practice of deporting or denying application for citizenship to immigrants on the basis of marijuana-related charges.

“We need to not only end the prohibition on marijuana, but also repair the damage done to the communities of color disproportionately locked up in our criminal justice system or locked out of opportunity because of the War on Drugs,” O’Rourke, who pushed for decriminalization as a member of the El Paso City Council, said in a statement.

Sen. Kamala Harris introduced legislation in July with similar aims. It would legalize the drug at the federal level while levying a 5 percent federal tax on sales. That money would fund job training, legal aid and rehabilitation for those who have had marijuana-related convictions in the past, while also providing funding to “socially and economically disadvantaged individuals” who are running marijuana-related businesses.

The bill, which is also supported by House Judiciary Committee Chairman Jerry Nadler, D-N.Y., would force federal courts to expunge prior convictions, prohibit the practice of denying federal public benefits as punishment for marijuana use, and enable states to set their own policies after removing the drug from the Controlled Substances Act. Harris has faced criticism during her presidential campaign for her record as a prosecutor, including taking a stance against legalization in California when she was running for state attorney general in 2010.

In 2018, Gardner and Sen. Elizabeth Warren introduced a bill that would make it illegal for the federal government to interfere with the marijuana industry in states that had legalized the drug. (The Warren-Gardner proposal was not supported by Booker, who said any marijuana-related legislation must include “restorative justice.”) Warren and Sen. Bernie Sanders have both said that if they were elected president, they would use executive action to effectively legalize cannabis by descheduling it under the Controlled Substances Act.

Pushing for the legalization of marijuana seems like a sensible platform, based on polling that shows a steady rise in acceptance. A CBS News poll conducted in April found 65 percent support for legal marijuana use, up from 59 percent in 2018 and 45 percent in 2013. Those numbers match up with 2018 surveys from Gallup, which found 66 percent support, and Pew Research, which clocked support at 62 percent. A statewide ballot initiative to legalize marijuana in Michigan, a state that Trump won by 10,704 votes in 2016, passed with 56 percent support in 2018.

A 2018 Colorado study released five years after the drug became legal in the state found that youth usage had not gone up but that there were increased instances of driving while high. Despite advocates stating that legalization would help policing, another state study found that black residents were still being arrested at twice the rate of white residents on marijuana charges.

In December, Trump signed into law the First Step Act, a criminal reform bill that among other things reduced mandatory minimum sentences. Last month, the House passed a bill that would make it easier for financial service companies to deal with cannabis-related businesses, but its future in the Senate is difficult to predict.

Former House Speaker John Boehner, who opposed marijuana legalization while serving, is now an outspoken supporter after being hired as a lobbyist for the cannabis industry. The legislation has faced opposition from groups who have criticized it for helping banks without correcting the bigger problem of ending marijuana prohibition. Gardner said in April that he had Trump’s support — although not that of Senate Majority Leader Mitch McConnell — for his bill with Warren that would allow states to decide their own marijuana policies without federal interference.