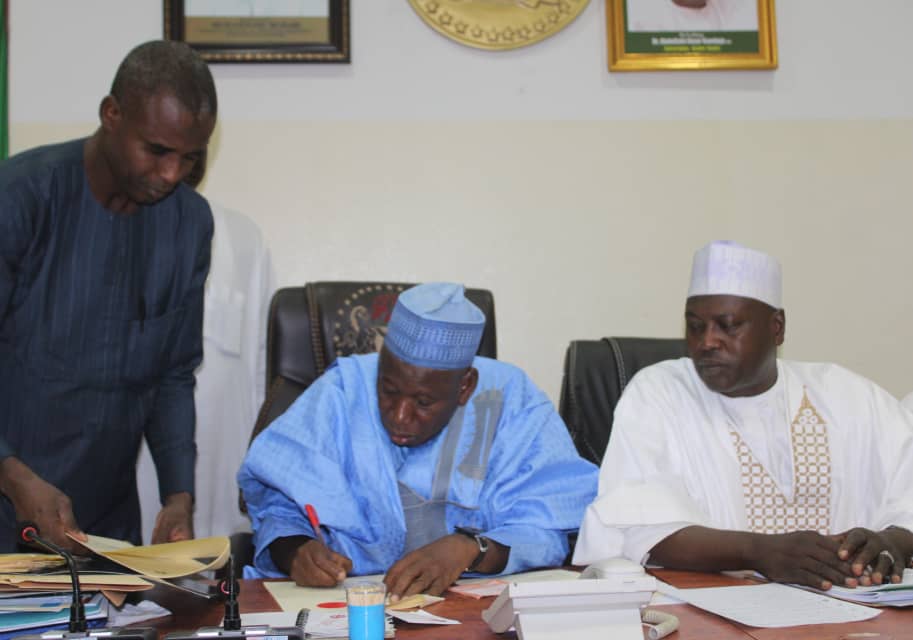 As France organises his meeting with French Development Bank

In his effort to diversify the state economy and take economic ties to global level, governor Abdullahi Umar Ganduje of Kano state, plans official visit to France to meet with French business community, with the view to wooing investors and to strengthen economic and cultural ties with the country.

His visit would fundamentally be an avenue for his special meeting with Kano students studying in France, in various French institutions of higher learning. Some at Masters level while others at Doctorate Degree level.

He discloses this when he paid an official visit to the French Ambassador, Mr Jeremo Pasquier, at the Embassy, in Abuja, Tuesday, assuring that, he would try his best to see that he markets economic potentialities of the state, to French business community, while in France.

Ganduje reveals that, in his second tenure in office he would work assiduously to see that Kano becomes a destination for global businesses, emphasising that,  “As we are diversifying our state economy, we are at the same time extending our hands of economic and cultural ties with countries like France.”

Cross fertilisation of diverse cultures, according to him, would, at the same time, promote global peace and harmony, observing that ” …with the long standing relationship between Kano and France, my trip will be of greatest opportunity to make the tie wax stronger than ever.”

“I also want use this opportunity and thank the French for the scholarship opportunities you are giving to our young and promising lecturers of higher education of learning, which is coordinated through Alliance Francaise,” he commended.

Adding that his meeting with Kano students studying at different French institutions would give Kano students another booster to keep closely to their books.

Governor used the visit to give a situation report of some funds French government gave to Kano, sometime in the past, as intervention for the state water sector.

According to him, “We are using the intervention for our Water Works, which did not have any major retouch since 1928, when it was first established, until now. This intervention from French government is doing us a proud.”

After the Water Works repair, governor said the state would then move effort to Water Reticulation aspect, emphasising that, “We are doing our possible best to see that water supply improves, as we have started, tremendously.

I am glad to inform you that, we are doing greater work and intervention in the water sector. As it is obtained in other sectors of the state.”

In his response the French Ambassador, His Excellency Pasquier, commended Ganduje for the good work in the education sector and other areas in his administration.

Assuring the governor, of French support in the development of education sector and making stronger economic ties between France and Kano state.

To further strengthen the economic ties from all ramifications, Ambassador Pasquier reveals that, “There is a plan for a meeting between Your Excellency and the French Development Bank, when you arrived there. And this will go a long way in improving our relationship.”