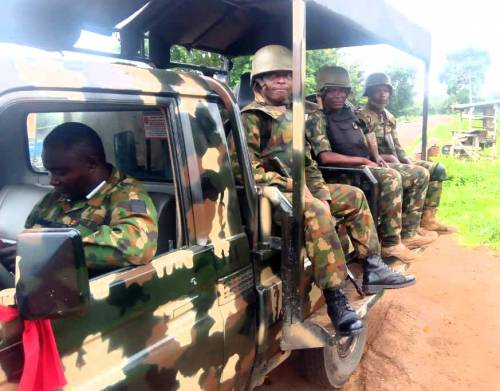 A State High Court sitting in Port Harcourt has ordered the Nigerian Army to pay the sum of N20 million as damages to the Chairman of Akuku-Toru Local Government Area of Rivers State and two other persons, for harassing the beneficiaries during the February 23rd Presidential National Assembly elections.

The Nigerian military had raided the homes of Roland Sekibo, Tobins Tobins and Damiete Dokubo and declared wanted over allegations of sponsoring hoodlums to truncate the electoral process to favour the PDP in the state.

However, the court yesterday in Port Harcourt declared that the actions of the military against the three persons were anti-democratic.

In his judgment in the suit filed by Sekibo and others, Hon. Justice George Omereji, condemned the military for issuing a statement indicting the Executive Chairman of Council, Sekibo, and the others as mastermind of events that occurred on the 23rd of February during the 2019 Presidential and National Assembly polls with grating them fair hearing.

He stated that it was wrong for the military to issues statement of declaring the three persons wanted hurriedly without the benefit of hearing from them.

Omereji, however, ordered the Nigerian Army and the Chief of Army Staff to pay the sum of N20 million, as damages on the raided of their private homes.

Meanwhile, Counsel for counsel for Roland Sekibo, Chairman of Akuku-Toru LGA, Ibim Dokubo, speaking outside the court room, noted that the judgment of the court has proven that the Chairman and the others did not do any wrong in participating in the just concluded elections.

“It gave a clear landmark judicial pronouncement, stating that the event of the 23 of Feb. which happened in the court of the general election as it applies to Roland Sekibo, Tobins Tobins and Damiete Dokubo were an infringement on their fundamental human rights.

“The court granted all the prayers we sought and condemned in clear terms the involvement and actions of the military in the electoral process. The sum of 20 million was awarded in favour of all the applicants as against the military.

“This means that our clients were not wrong in participating in the election, but it was undemocratic for the military to have arrested them and invaded their homes in any manner.”

Samuel Edewede, counsel representing the First and Second respondents, Nigerian Army and the General Officer Commanding the 6 Division Port Harcourt and the Chief of Army Staff, noted that the Army would appeal the judgment.

He said: “The judgment went against us and the court resolved that my clients carried out the act complained about by the applicants. We do not feel satisfied because we have said we are not election agents. In this era when people go about with military uniform and carries military guns and carry out acts, but court agreed with them that it was the military.”