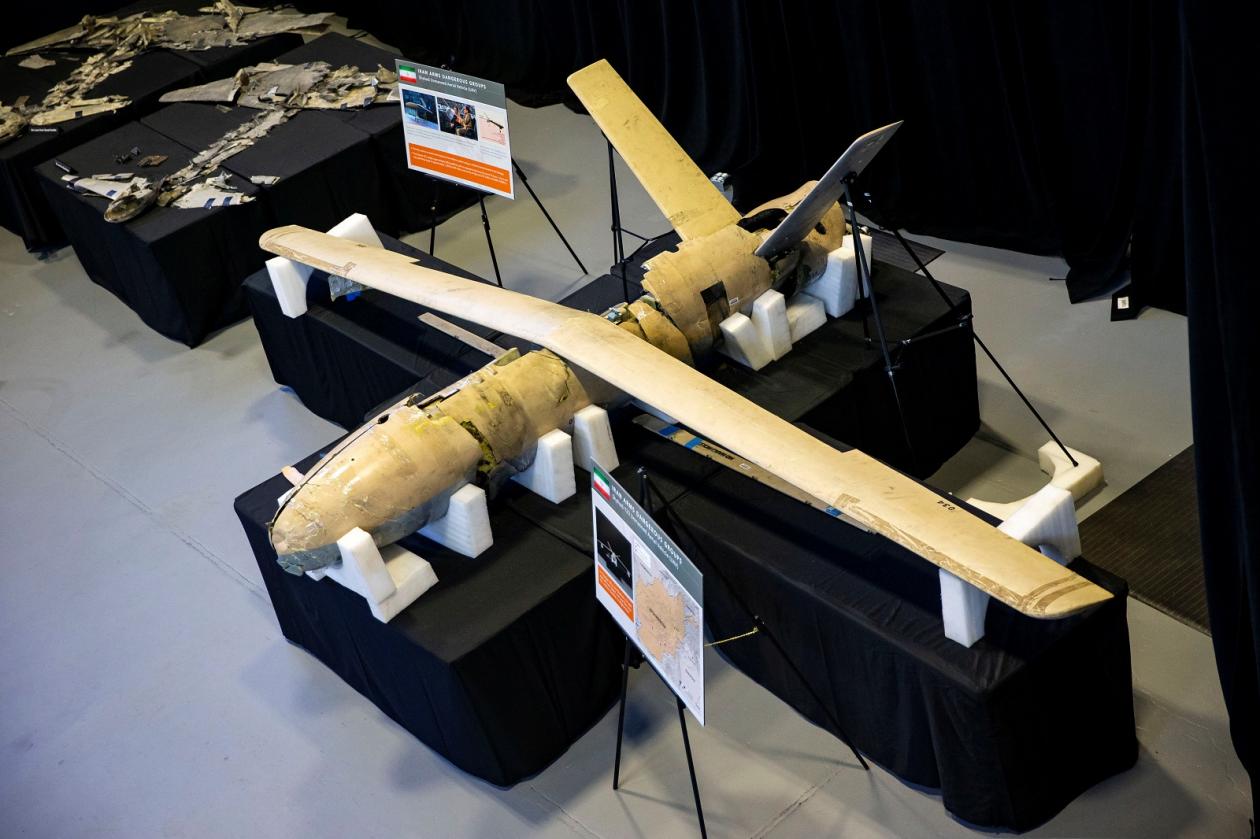 Key Point: The latest encounter in the Gulf between the USS Boxer and one of Iran’s drones offers us a glimpse on how addressing these challenges might be in the future.

On July 18, an Iranian drone approached the U.S. Navy ship USS Boxer in international waters while it was on its way to the Strait of Hormuz in the Persian Gulf. The drone ignored multiple calls to stand down and came close to around 1,000 yards from the American ship, prompting the Marines on board to shoot it down. A statement by chief Pentagon spokesman, Jonathan Hoffman, said the drone approached the ship and “closed within a threatening range” and that “[we] took defensive action against the [drone] to ensure the safety of the ship and its crew.”

Iran denied that one of its drones had been shot down. Commenting on the incident, spokesman of the Iranian Armed Forces Brigadier General Abolfazl Shekarchi said all of Iran’s drones in the area had returned safely to their bases after completing scheduled surveillance and control operations, including the mentioned one. To support its claim, Iran’s Revolutionary Guard Corps (IRGC) released a video shot from a drone tracking the USS Boxer. The IRGC boosted that the drone recorded three hours of video of the USS Boxer and five other vessels from when they had entered the Strait of Hormuz. Though the video offers no evidence that the drone had not been shot down, the recording gives us an idea on the increasing role of drones in Iran’s asymmetric operations.

This is not the first time an Iranian drone came close to a U.S. ship in the Gulf. In January 2016, an Iranian drone reportedly flew over a U.S. aircraft carrier transiting through the Gulf of Oman on its way to the Persian Gulf and also photographed a French naval vessel. Although the drone didn’t pose any serious threat to the ships, it delivered its intended message, Iran is now able to monitor all the ships in the Gulf and inflict damage if it wants.

Since then, there have been several serious incidents in the region involving Iranian drones, at least one of them could have triggered a regional war last year when Iran flew a weaponized copy of the U.S. RQ-170 Sentinel UAV from Syria into Israel. The Israeli Air Force shot down the drone and carried out airstrikes against a number of Iranian targets in Syria before a Syrian anti-aircraft battery downed an Israeli F-16. This, in turn, triggered a wider Israeli retaliation against Syrian air defense systems and Iran’s entire attack drone weapons system in the country.

In March 2019, Iran’s defense ministry launched a massive drone drill which involved flying more than fifty drones simultaneously, including Iranian versions of the U.S. RQ-170 Sentinel stealth drone and the American MQ-1 Predator. Commenting on the drill, Brigadier General Amir Ali Hajizadeh, the commander of the IRGC’s Aerospace Division, said the presence of squadrons of drones in the airspace of a small area heralds “the rise of new air power in Iran.”

Although Hajizadeh’s claim is not exceptional in light of traditional Iranian propaganda which inflates the country’s capabilities to rally internal support, his statement should not be totally ignored when it comes to the increased integration of drones in Iran’s regional military operations. One worrisome reason is that Tehran doesn’t need to manufacture complicated or advanced drones to pose a threat to its adversaries. Much cheaper and less capable drones can still perfectly suit Iran’s asymmetric military strategy.

The Tasnim news agency, which has strong links with the IRGC, recently ran an article that clearly hinted to the possibility of arming the Iranian drones flying over the US ships with the aim of carrying attacks whenever deemed necessary. The article stressed that, “Pentagon generals are deeply concerned that if Iranian drones can pass their radars without being tracked by their terminating mechanisms, they might as well carry out military attacks on their vessels if needed.”

Iran’s attempts to manufacture drones can be traced back to the 1980s. The country’s primitive drones were originally designed to enable Tehran to conduct intelligence operations and surveillance missions. However, as they evolved over time, they carried additional tasks that included offensive missions. Almost a decade ago, an unclassified report of Congressionally Directed Action on the military power of Iran asserted that air planners in Tehran understand the value of unmanned aerial vehicles (UAVs) adding “Where UAVs are concerned, Iran has an active program and two families of reconnaissance, target and lethal UAVs.”

For Iran, drones come with several advantages which make them compatible with Iranian asymmetric warfare thinking: mainly that they are relatively cheap; safe, as they are unmanned and can be operated from a far distance; can easily defy territorial boundaries to conduct intelligence, reconnaissance, surveillance missions; and can even launch offensive attacks. Moreover, drones enable Iram to gain some prestige and project power outside its boundaries. The fact that they are not complicated or expensive makes them quite attractive for Iran.

Although U.S. sanctions interrupted Iran’s ambitious drone program several times, it didn’t stop it. For years, the IRGC managed to circumvent these sanctions and smuggle key components necessary to manufacture drones from several countries such as Germany, France, the United States and others. In one noticeable case, authorities in Frankfort charged two Iranian-Germans with smuggling sixty-one German-made aircraft engines between 2008 and 2009 to Iran for its Ababil III drone program.

Iranians were eventually able to produce more drones than ever before, but this process was not challenge-free. The IRGC faced a lot of challenges that are mostly related to creating the adequate communication infrastructure to control UAVs, and arming the drones with air-to-ground missiles. In the aftermath of the Joint Comprehensive Plan of Action nuclear deal between the Obama administration and Iran in 2015, Tehran showed an accelerated tendency to further develop its drones and deploy more of them in the region.

In one of its latest statements, Rear Admiral Hossein Khanzadi, the head of Iran’s navy, claims that Iran’s drones are watching every U.S. ship in the region, adding “Our drones have significant ranges and have no limitations in communication links. We have a complete archive of images of American vessels approaching from very far distances … an immense archive of the day to day and even moment to moment movements of American forces, whether in the Persian Gulf or Oman sea.” Such statements suggest that Tehran had been able to overcome one of the problems regarding communications infrastructure, however, it is believed that the challenges to the national drone program are still the same with the exception that drones are becoming more integrated in the country’s military doctrine to carry out offensive attacks.

Threats arising from Iran’s asymmetric military strategy are often downplayed. The traditional approach—which argues that Tehran’s military doctrine is merely defensive—ignores the fact that despite Iran’s conventional military power being relatively weak, the regime has been advancing in the Middle East in the last two decades due to its growing offensive asymmetric capabilities which incorporate asymmetric land, naval, and air assets such as armed militias, cyber capabilities, and drones.

The most dangerous aspect of Iran’s drone program, however, is Tehran’s transfer of these weapons to its allies, sub-regional IRGC groups, and proxies such as Assad regime, Hezbollah in Lebanon, the Shiite militias in Iraq, and Houthis in Yemen. During the last few years, Iran has accelerated the deliveries of many of its drones to these parties and has been using Syria, Iraq, Lebanon, and Yemen as a testing ground for its drones against countries such as the United States, Israel, Saudi Arabia and others.

Hezbollah, Iran’s strongest arm in the region, is the oldest semi-state actor known to use drones. In 2012, Hezbollah conducted one of the most drone-daring missions to the nuclear complex at Dimona. Ultimately, the drone (Ayoub) was shot down, but it was found to be equipped with components manufactured in Germany by Siemens AG. According to 2013 estimations, Hezbollah has a fleet of around 200 drones, including Iranian models of Ababil and Mirsad, in addition to self-designed drones and commercial ones. In 2014, the United States imposed financial sanctions on Stars Group Holding—an electronics company with subsidiaries in the UAE and China—for secretly buying electronics in the United States, Canada and Europe to help Hezbollah make drones for its military activities.

In order to improve its capacity and become more adept at coordinating drones’ operations with ground forces, Hezbollah engaged in more complicated drone missions in the Syrian Civil War against Syrian rebels, especially in 2014 and 2015. Satellite imagery by IHS Jane’s uncovered an aerial base run by Hezbollah that has a 2,200-foot unpaved runway—which is specifically designed for Iranian UAVs, such as the Ababil-3 and the larger Shahed129—numerous sheds, and an antenna that intended to enhance the range of a UAV ground control post.