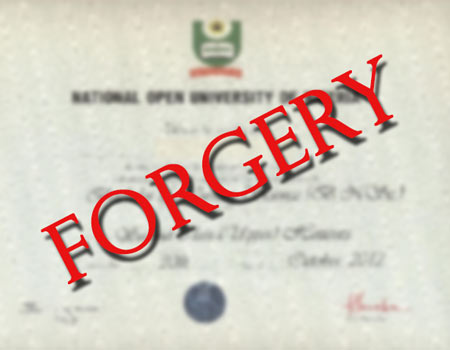 The Director of Administration in Adamawa State Health Management Board (ASHMB), Halilu Abba has been taken before the Independent Corrupt Practices and other Related Offences Commission (ICPC) for allegedly forging a Master’s degree certificate.

Abba is alleged to have tendered the document issued by the Adamawa State University, Mubi, in 2013, to gain promotion into the office of Director of Administration in the Board, following which the ICPC, after a complaint to it, made its investigations and found that the degree was not validly issued to him.

Investigations showed that he had actually been a student in the university but did not complete the Master’s programme.

Concerned citizens blew the matter open in a letter dated May 28, 2019, alerting the ICPC, which in turn wrote to the university on June 11, 2019, to verify the truth.

The management of the university, in a letter signed by its registrar, Yahya J Bobboi, said the candidate who was of the Department of Public Administration of the Postgraduate School of the university, had MPA 7091 (Research Methodology) as outstanding carryover as of July, 2019.

“The statement of result issued on 4th September, 2013 was issued without the candidate completing the MPA programme,” the university said.

The ICPC has evidently responded to the reply from the university by demanding Abba’s immediate prosecution.

The whistleblowers are said to have told Governor Ahmadu Fintiri through the Head of Service to act appropriately, especially against a history of forgeries in government circles, including a celebrated case just before the exit of the last administration, of a secondary school leaver who, using someone else’s medical qualification, practiced for years as a doctor under the state government.

Abba could not be reached for comment, as he repeatedly shifted requests for interview.