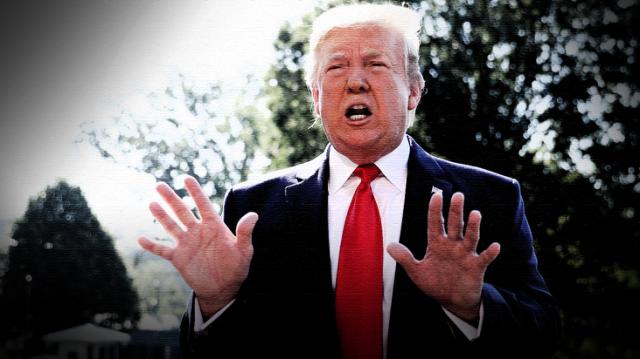 What’s happening: Over the past two weeks, the news has been dominated by coverage of President Trump’s attacks against a series of prominent liberal figures, all of whom are people of color. First he told members of “the Squad” to go back where they came from. He then described Rep. Elijah Cummings’ Baltimore district – a predominantly black neighborhood – as “rat infested,” and most recently he alleged that Rev. Al Sharpton “hates whites.”

Democratic politicians and members of the media denounced the president’s comments as racist. Multiple polls indicate that the majority of the public agrees.

Why there’s debate: Trump’s attacks have sparked disagreement over whether he’s deliberately stoking racial division as a political tactic. On Tuesday, the president himself said “there’s zero strategy” to his criticism of Rep. Cummings. Nevertheless, observers on both sides of the aisle see a calculated approach guiding his outbursts.

Others say this line of thinking is a misguided way of rationalizing the president’s behavior. They argue that racism is a fundamental facet of Trump’s identity and predates his political aspirations by decades. Any electoral benefit stemming from his attacks is coincidental, they say, especially given evidence that he may be hurting his campaign by putting race center stage.

What’s next: Whether it’s a deliberate strategy or just Trump being Trump, it appears likely that racial division will be a major element of the 2020 presidential campaign.

Racial attacks are designed to shore up support with Trump’s base.

“With little chance of increasing the president’s support outside of his base, the campaign knows their best chance to win is to motivate and hope to grow that support within populations of like-minded people. So, they are left with doing what they do best — hate and racism. And they will continue to double down until election day.” — Peter Wade, Rolling Stone

There is no strategy behind Trump’s racial attacks.

“He will undoubtedly run one of the most grotesque reelection campaigns of the post–civil rights era, but that is not to say that this week has been a preview of a deft, grand strategy. Instead, this was a confirmation of what’s been evident for the past several years, and what’s been known to Trump watchers for decades: The president is a bigot — maybe a lucky one, but a bigot all the same.” — Alex Shephard, New Republic

Racial grievances got Trump elected in 2016.

“It’s time we simply admit the truth: President Donald Trump got elected because of his racism, not in spite of it.” — Montel Williams, USA Today

Attributing Trump’s actions to strategy protects those around him from facing reality.

“There is always this need to attribute this master plan to Trump because otherwise you have to come to terms with the fact that he’s a blithering idiot.” — Campaign consultant Stuart Stevens to HuffPost

Trump uses racial disagreements to push voters away from Democrats

“Selling America on an agenda of banning Muslims and separating immigrants from their children is hard, but convincing some smaller subset of the Republican electorate that Democrats see Trump supporters as racists? That’s much easier, especially when Trump himself is constantly goading those same Democrats into calling him a racist.” — Jon Ward and Andrew Romano, Yahoo News

“Many of Trump’s key supporters like Trump because he celebrates them; he celebrates whiteness. He reduces politics to a kind of tribalism that does not respond to facts or policy successes and failures, because it was never predicated on facts or policy to begin with. The mere perception that he is standing up for a frustrated band of white voters serves his purpose.” — Rich Benjamin, Los Angeles Times

Trump has always been racist.

“Racism has been a running motif of Trump’s life, from his inheritance of a real estate empire that was sued for not renting to African-Americans, to his calls for the execution of the (innocent) Central Park Five, to his Obama birtherism, to his recent Twitter attack on four Democratic congresswomen, all people of color.” — Jeet Heer, The Nation

The media’s willingness to call his language ‘racist’ changes the political calculus.

The attacks may increase turnout in Democratic-leaning communities that stayed home in 2016.

“By adopting the language of barroom bigots everywhere, Trump is narrowing his potential voter pool and incentivizing some key groups whose participation could be key, such as suburbanites in Michigan, minorities in Milwaukee and Philadelphia, and millennials who voted for the Green Party in 2016.” — John Cassidy, New Yorker

Trump has come up short in his economic promises from 2016, so he’s leaning into racial grievance.

“Whatever the role of Trump’s ‘economic’ populism in his victory, what’s left behind here is the crucial fact that Trump’s economic agenda isn’t energizing his base in the manner he needs. We know this due to the admission of Republicans themselves, and it’s illustrated by Trump’s own fallback on racism as a galvanizer.” — Greg Sargent, Washington Post

“Dems wind up not talking about they’re better policies plus they push working-class white GOP voters who don’t like Trump into his corner because most people don’t like being told they’re racist a—holes.” — Gabriel Sherman, Vanity Fair

Trump is the culmination of biases that have been part of Republican politics for decades.

“Trump is the Frankenstein made up of all the racist, xenophobic, hateful parts Republicans have deliberately used to appeal to their base. He’s not subtle. Now it’s pure, unadulterated, out in the open.” — Wajahat Ali, New York Times contributor

Trump controls the political narrative by forcing race to the center of discussion.

“This is the fundamental problem of Trump: he provokes by saying horrific things that cannot go unchallenged, but in challenging them, you rev up him and his base to double down in delight (and sincere belief) and horrify you more, which means you have to challenge it again, etc.”

Fighting Trump on race is the key to a Democratic victory in 2020.

The media is partly responsible for making racial attacks a successful strategy.

“Many in the mainstream media quickly moved on from covering the despicableness of Trump’s comments to entertaining the possibility that his attacks were evidence of a high-level political strategy to sow division among Democrats in Congress. In doing so, the press is assisting in Trump’s attempts to rebrand his open bigotry as strategy and giving cover to a Republican Party that allows it.” — Timothy Johnson, Media Matters

Trump is attacking the core ideal of America as a multiracial nation.

“This is not about Omar anymore, or the other women of color who have been told by this president to ‘go back’ to their supposed countries of origin. It is about defending the idea that America should be a country for all its people. If multiracial democracy cannot be defended in America, it will not be defended elsewhere. What Americans do now, in the face of this, will define us forever.” — Adam Serwer, The Atlantic