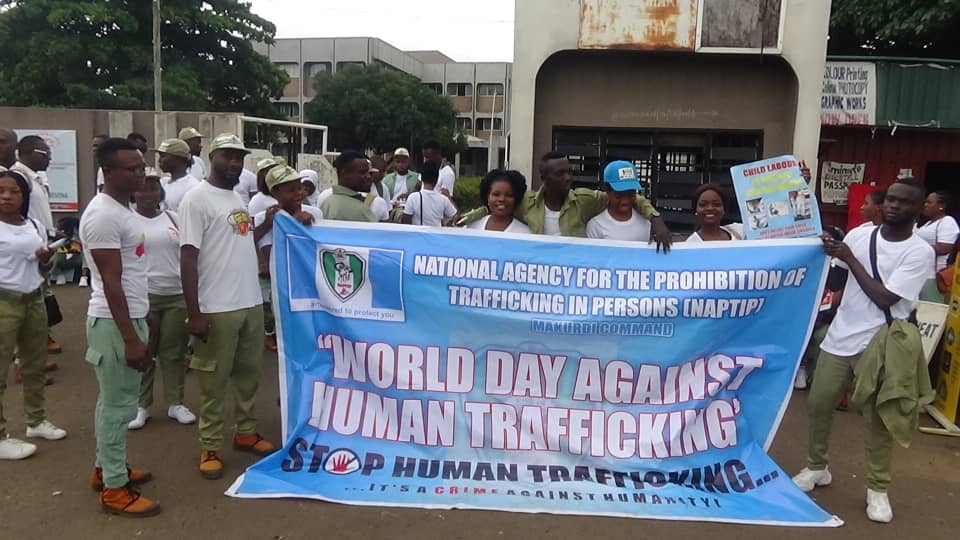 National Agency for the Prohibition of Trafficking in Persons, NAPTIP, Makurdi Zoanl Command, said the agency has rescued 86 victims in the last one year.

The Agency’s Zonal commander, Ganiyu Aganran Alao, disclosed this in his office in Makurdi, after he led officials of the agency and other stakeholders on a road walk,  being part if activities to mark the 2019 World Day Against Trafficking in Persons.

The command had walked from the Benue State University, BSU, gate through Wurukum Roundabout and State Library, to sensitize the public on the dangers of trafficking in persons.

Speaking with our corespondent in his office in Makurdi, the Zonal Commander expressed concerns about the alarming rate of trafficking cases in the state.

He named forced labour, sexual exploitation, foreign travels that promotes prostitution, domestic labour and Child Abuse, child molestation, forced marriage, baby theft as well as baby sale as forms of trafficking in the state in recent past, saying NAPTIP has not relented in curtailing these menace.

He said with various forms of trafficking fast becoming a flourishing business in identified local government areas, the agency has stepped up awareness campaign and deployment of its officers to IDP camps to clamped down on the menace.

Mr. Alao thanked Benue state government for their numerous assistance and called on them to sustain the smooth synergy with the agency to rid the State of endemic human trafficking issues.

He stated that in compliance with the matching order from Abuja headquarters, “We will be deploying some of our officers to IDP Camps and some lical government areas identified as being endemic, Konshisha, Oju, Obi, Vandeikya to sensitize residents.

He noted that the agency headquarters has developed a register for sex offenders with effect from today for prosecution against sexual molestation.

The theme for this year’s celebration is, “Human Trafficking: Get Government To Action.”