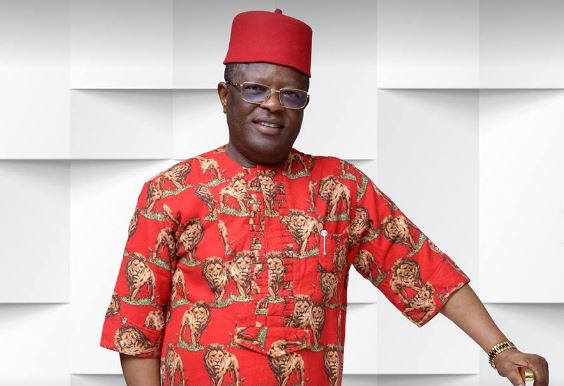 Gov. Dave Umahi of Ebonyi has dissociated himself from the purported inauguration of a campaign platform by a group of Socio-political group in Abakaliki on Tuesday.

Umahi in a statement by his Chief Press Secretary, Mr Emmanuel Uzor, also dissociated his government from any form of political gathering with intent to promote his presidential ambition in 2023.

The governor said he was more committed to delivering quality and purposeful leadership to the people of Ebonyi, adding that it was too early for anyone to begin to talk about 2023 presidential campaign.

“I am greatly embarrassed by the link associating me to presidential ambition of 2023 being circulated in various social media platforms.

“I wish to state that I will not be distracted through endorsements by groups and individuals who clamour for Nigeria president of Igbo extraction.

“I do not know the promoters of the platform and could not have contracted them to do the job.

“But, I believe that any genuine and law abiding Nigerian reserves the right to go about their business as long as it do not impinge on laid down rules of the country,” he said.

Umahi however dismissed the insinuation of his presidential ambition, adding that ”2023 is still very far ahead of us.”

He said: “I am the governor of Ebonyi and a second term governor for that matter; by the grace of God, I put all my energy and concentration to serve my people as governor and deliver on my campaign promises.

“I am not looking at where I will be tomorrow; allow God to determine my next political fate, but don’t distract me with presidential ambition of 2023 in 2019, it’s ridiculous,” he said.

The governor noted that he was not against agitation by any group for Nigeria president of Igbo extraction but maintained that he was completely opposed to linking him to the project at such a period.

“Let me say again, as a Nigerian and Igbo man and also in my capacity as the chairman of South-East Governors Forum, that I am not against the idea or agitation for Nigeria President of Igbo extraction.

“But linking me to it at this time is mostly embarrassing, distracting, premature and I beg to be left out of it,”  he said.