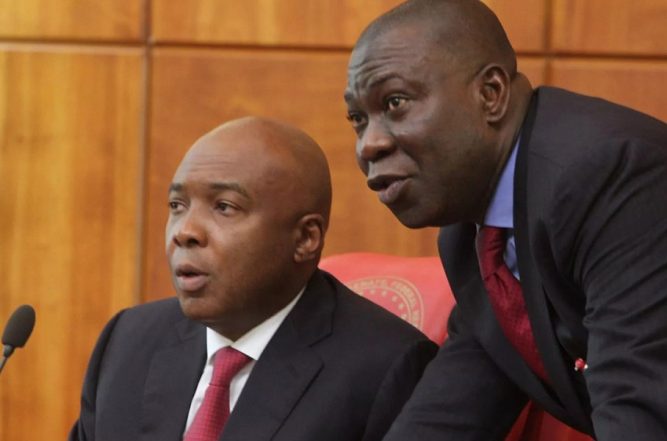 Ekweremadu spoke at the inauguration of the Nigeria-Morocco Parliamentary Friendship Group at the National Assembly, Abuja on Wednesday.

The Senator, who is the Chairman of the Parliamentary Friendship Group in Nigeria, explained that the bilateral meeting between the King of Morocco, His Majesty, Mohammed VI and President of Nigeria, His Excellency, Muhammadu Buhari in 2016 had broadened the coasts of bilateral friendship and cooperation between the two African giants

He said” It is recalled that the visit culminated in the signing of a number of agreements and Memoranda of Understanding (MoU) between the two African nations covering both the private and public sector. The agreements and MoUs stretched from energy to agriculture, transport, finance, banking and insurance, culture and tourism as well as visa waiver for holders of diplomatic and official/service passports.

“The visit by the King of Morocco witnessed the signing of an agreement between Office Cherifen des Phosphates (OCP) and Dangote Group to build an integrated fertilizer production plant in Nigeria, while the two Heads of State agreed to lend support to projects that would hasten the socio-economic development of Africa, especially the Trans-African Tangiers-Lagos Highway.

“Notable also was the agreement to construct a trans-Africa gas pipeline that will run from Nigeria to Morocco to the immense socio-economic benefits of not just the two countries, but also many African countries. Of course, Nigeria and Morocco agreed to lend mutual support to each other in the war against insurgency and terrorism”.

He stressed that the legislatures of both countries had a major role to play in the reinforcement of the friendship and actualisation of the agreements and MoUs.

“Parliamentary diplomacy has continued to gain prominence as a reliable means of building lasting and mutually beneficial bilateral and multilateral relations in the modern world.

“Let me assure Nigerians and our Moroccan friends, therefore, that this Group will propose policies, legislative frameworks, and agenda that will catalyse economic, political, and social cooperation between Nigeria and Morocco in a way that we can gain from the comparative advantages of each other.

“We are indeed convinced that the mustard seed sown today will grow into a big tree that will provide economic, political, and social shelter for the peoples of the two nations and Africa for ages to come”, he added.

Ekweremadu commended the President of the Senate, Senator Bukola Saraki, who performed the inauguration ceremony, and his Moroccan counterparts for their foresightedness and commitment to the African brotherhood and prosperity.

The inauguration was attended by the Ambassador of morocco to Nigeria, Mr. Mouha Ouali Togma; President of the Moroccan arm of the Nigeria-Moroccan Parliamentary Friendship Group, Mr. Abdellatif Hafidi as well as the representatives of the Ministry of Foreign Affairs and the Nigerian public and private sector, who hailed the initiative as a commendable step towards the socio-economic development of the two nations.