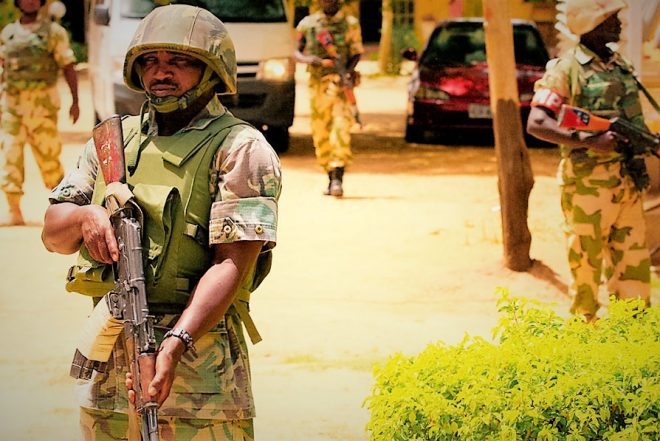 A detachment of military operatives from Owerri Division has yesterday, Sunday arrested and disguised one Ojukwu, a security guard at the house of the missing leader of the indigenous People of Biafra (IPOB), Mazi Nnamdi Kanu while raiding the house of the leader.
Nigerian Horn was reliably informed by an eye witness that young man who identified himself as Ojukwu confessed that he had merely resumed work as a security guard at the  at the house of the leader of the freedom fighting outfit, and as such knew nothing about the struggle, pleaded innocent of the allegations levelled against him.
Our source who spoke in anonymity regretted the unfair treatment meted out to the security guard whi h be described as a blackmail, and lamented that the said Ojukwu was as at the time of his abduction by the troop who were deployed by the new commissioner of police, Anthony Michael Ogbizi, dressed in a casual pair of red T-shirt as worn by so many other young men on the streets but was at gun point threatened by the military to take off his shirt and then put on the IPOB attire in their  bid to blackmail the missing leader of the group, subsequent to the court case scheduled for October 17, with a sole view to tagging the group a terrorist group, as a locally made gun which was discovered at the house of the leader of the group was planted on the body of innocent Ojukwu, taking snap shorts and videos of him, in order to prove to the world that the statement of the Nigeria government which alleged that the group was a terrorist group was real.
Our reporter who visited the factory road leading to the house of the IPOB leader barely twenty minutes after the operation was reliably informed by another source who was a passer-by at the time of the incident and equally pleaded for anonymity, that the military who were carefully accompanied to the palace of Eze I. O KANU for the operations, by some officers serving under the  new commissioner who was spotted to have dressed like a civilian just like his men, had been there earlier as they were spotted by Ojukwu who was said to have been seeing a movie upstairs through the CCTV and had thought they were gone but could not believe his eyes when he noticed the troop had returned for the second time, still in company with the Commissioner of police and his men, as the soldiers numbering more than ten, jumped in through the fence, ransacked the entire palace and then had Ojukwu abducted, with his hands bound.
Our source has this to say: Ojukwu was not dressed in that IPOB outfit, it was the military who compelled him to put it on. They tied his both hands and then placed the local gun on his legs. I know all these are mere plots to prove to the world that that man, Nnamdi KANU is leading a terrorists group. Even, Ojukwu pleaded that he was not a member of the IPOB and knew nothing about the struggle but was just employed to safe guard the place, ignorant of what had happened in the past. He said ‘I didn’t come with any of these things. I am innocent. I know nothing about this’. So, all those things they planted around and on Ojukwu were fake, they were simply to indict the leader of the group should he appear at the court on 17″, he wailed.
Nigerian Horn further learnt that all the efforts of the GOC, 82 Div, Nigeria army, Enugu, to deploy the military at Ohafia to carry out the operations were futile as he could only but help direct the new  commissioner of police, Abia state  who in company with his men led the troop from Owerri division to carry out the operation all in the quest of the federal government, according to our source, to have Nnamdi KANU in their net should he appear in court on October 17.
It was also unveiled to Nigerian Horn that other items stolen from the house of the leader were some boxes containing the clothing materials of the wife of the king, the various CCTV planted at the palace, some IPOB items such as flags, shirts, toy building designed with Biafra colour, and the local gun which was subsequently placed on the security guard for snap shots, who was then suddenly alleged to be a terrorist, as all including the innocent security guard were dumped at the police mess, along factory road, in Umuahia.
All attempts to speak with the commissioner of police or the PPRO failed as one of the police officers whom our reporter met at the police Mess, who simply addressed himself as a senior officer utterly refused to speak.
–
Source: Nigeria Horn News.