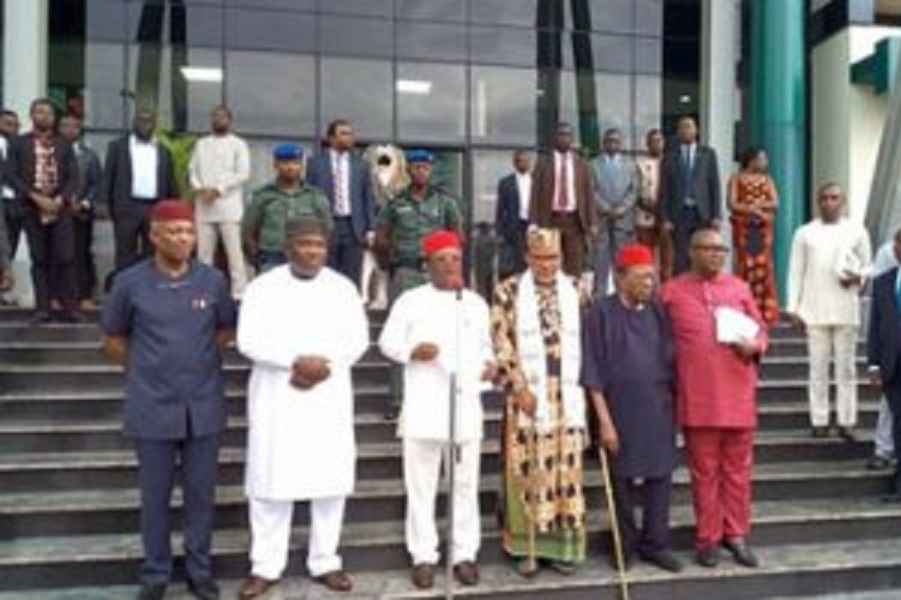 The Movement for Actualization of Sovereign State of Biafra (MASSOB) under the leadership of comrade Uchenna Madu yesterday commended the South-East governors and leadership of Ohaneze Ndigbo for meeting with the leader of Indigenous People of Biafra (IPOB) Mazi Nnamdi Kanu, describing it as a new beginning for Ndigbo.

The National Director of Information Edeson Samuel in a statement said that the was a welcomed development and a new beginning for Ndigbo because according him ‘united we stand and divided we achieve nothing”.

The group noted that it would no longer accept any insult on the Igbo leaders, ‘we cannot allow our fathers to be insulted by these Hausa/Fulanis that has no generational value. MASSOB also condemned the attack on President of Ohaneze Dr. Nnia Nwodo by Arewa group and Chief Ralph Uwazuruike”.

According to Samuel “It is on record that Raph Uwazuruike was expelled from MASSOB 30th November 2015. It was published on national dailies eg, the nation newspaper of Tuesday Dec 2015 front page and page 43 which titled ‘MASSOB sack Uwazuruike’.

Uwazuruike is a frustrated, this is the character of a drowning man. He will always look for excuse to justify his negative action”.

“For Raph Uwazuruike and BIM saying that they did not recognize Ohaneze Ndigbo and his leadership is laughable and should be disregarded because they have nothing to offer to Ndigbo. Raph Uwazuruike is BIM leader, we are not contesting that so he should not be addressed as MASSOB leader because he remained expelled”.

“The leadership of Ohaeze Ndigbo did not invite Uwazuruike because they knew the real Biafra agitators. MASSOB also condemned the attack on Dr. Nwodo by Arewa group. We know that this group is been sponsored by the Northern politicians. MASSOB will no longer accept any insult on the Igbo leaders, we cannot allow our fathers to be insulted by these Hausa/Fulanis that has no generational value”.