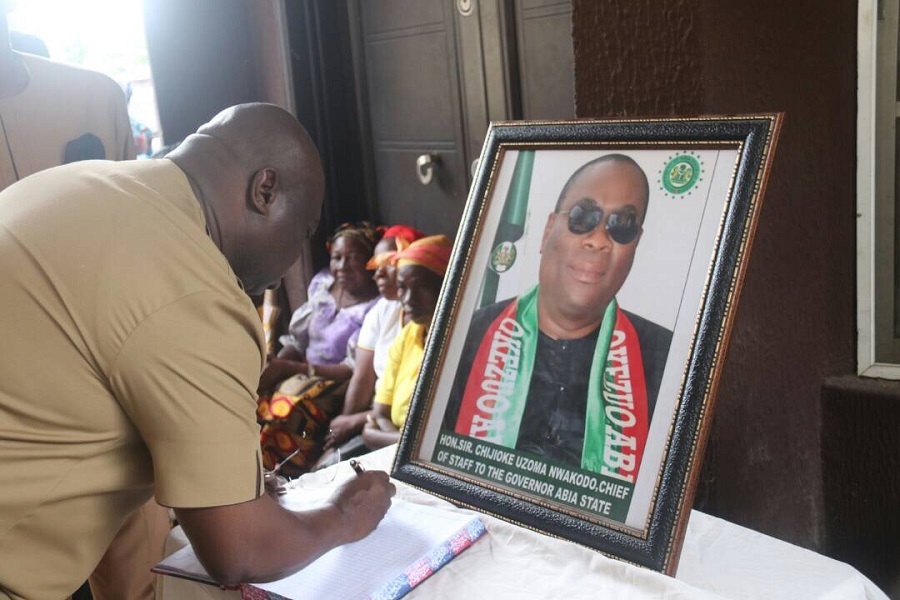 Abia State Governor, Dr Okezie Ikpeazu, has described his late Chief of Staff, Chief Chijioke Nwakodo, as the engine room of his administration who gave everything for Abia State.

Governor Ikpeazu said this when he paid a condolence visit to the family house of the late Chief Nwakodo at Ndume Ibeku in Umuahia.

Signing the condolence register, Governor Ikpeazu wrote: “This will perhaps be my most difficult assignment as a Governor. To have to write this for my brother, friend, leader, and compatriot. A man, so pure and hearty, so loving and caring. Chiji, you gave your all for our dear state and I assure you that your effort will not go in vain. My Caesar, my Cicero, my hero is gone, when will another come?

“You live in our hearts and on behalf of Abia State and my family, Rest in the bosom of your maker, who you loved and served. Adieu Nwannem”

Governor Ikpeazu who was received at the family house by Chief Obidike Nwakodo expressed sadness at the death of his friend and associate who died at a United Kingdom hospital on Thursday 10th of August 2017.

“The news of the demise of my brother and friend, came as a shock to me. Never imagined such at this time”, he said.

He described the death of Chief Nwakodo as “a very damaging blow to Abia State Government and  people, Ndigbo and all progressive minded individuals in Nigeria”.

According to Governor Ikpeazu, “Chijioke was committed and fearless in the fight for those things he considered fair. He was there for the common people. His efforts to write a good story is well known to everybody.

“He threw in his money, resources and intellect to support this present administration. He was an engine room upon which this administration came on board. The bullets I could not take, Chijioke took, he fought like a lion to his last breathe. He died for the state .

“We will mourn and cry because there is a big vacuum to fill. It is difficult to duplicate his courage and vigor in fighting for the things he believed in. But there is hope here after.  I will not tell anybody not to cry but whatever be the circumstance, he has left responsibilities on all our shoulders.

The only way to immortalize him is to do all those things he would’ve wished to be done if he were alive.”

In his response, Chief Obidike Nwakodo thanked the Governor for all he did for their late brother including taking care of him while he was ill and showing confidence him all through. He expressed the sadness of the family and assured the Governor that “we will all work hard to ensure that the legacies left by Chijioke are not erased”