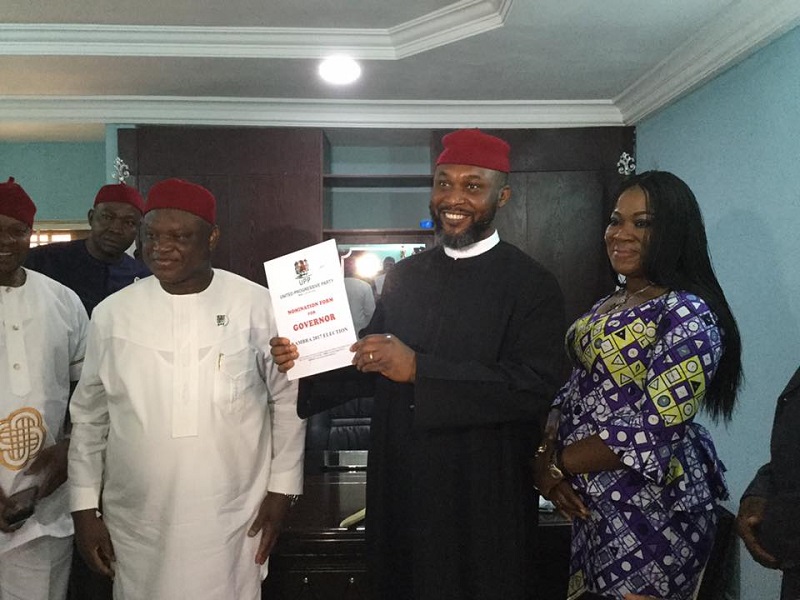 …Promises To Modernize Governance In Anambra

Frontline contender in the November 18, 2017 Anambra governorship election, Chief Osita Chidoka on Monday picked his nomination form to contest the election on the platform of the United Progressive Party (UPP).

The former Aviation Minister who was accompanied by a large crowd of political associates and supporters including women, youth and professional groups stormed the National Secretariat of the UPP in Abuja where he was received by the National Chairman, Chekwas Okorie and other top party functionaries.

Speaking after receiving the form from the National Chairman, Chief Chidoka said he is on a mission to “modernize governance in Anambra and institute a resourceful, creative and transparent government that restores equality and reintegrates the ordinary citizens of the state who have long been neglected into a functional democracy that work for everyone, ensuring that the masses are once again, the ultimate beneficiaries of government.

“Anambra people are desirous of a new beginning and the time is now. Our state with its exceptional human and natural resources needs a very creative and resourceful government to achieve its full potentials. What we have as governance today is a mere celebration of the ordinary. We want to move away from celebrating the ordinary to instituting a system that works for our people. We want to build a system that provides the opportunity for our innate capacity and potentials as a people, to be fully developed.

“Our model is one that makes sure that the individual is the center of all government policies and projects. We want a state that is transparent and all-inclusive with a government that ensures that every Anambra person is given the unhindered platform to excel in his chosen sphere of endeavor”, he said.

Stating that he is ready for the polls, Chief Chidoka assured the public, that he has the proven capacity, experience and presence of mind to reposition Anambra state, while noting that his major backing is God, and the people of Anambra state who are set to demonstrate their support for him at the polls come November 18, 2017.

Chidoka said the UPP offers the people of Anambra the genuine platform to achieve their aspirations including restoring the Igbo voice in Nigeria, which is one of the major objectives if he is elected governor, adding that the UPP is also the ideal platform to achieve a nation that works for all and where no man is oppressed, irrespective of creed or ethnic affiliations.

Speaking at the event, the National Chairman Chief Chekwas Okorie said Chief Chidoka represents the ideals and manifesto of the UPP. He described Chidoka as the real tiger, the symbol of the party, adding that the party is set to win the November poll.