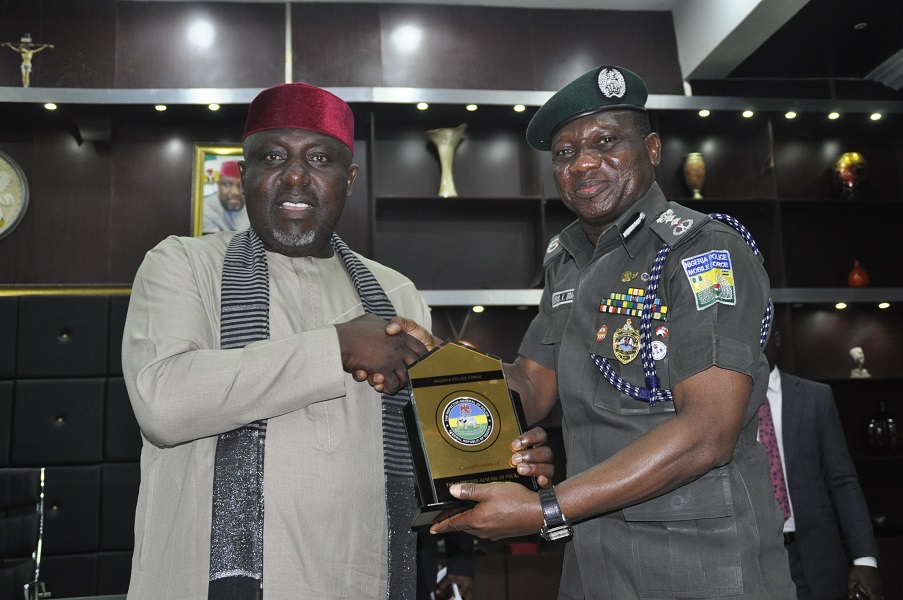 -Imo Is The Most Peaceful State In The Country

-Nigeria Police Contributed To His Wealth

Governor Rochas Okorocha also described Imo as the most peaceful state in the country, stating that within the past six years of his administration, his government was able to prove that development and crime have no relationship because there are lesser crimes where there is development than where there is underdevelopment.

The governor who spoke weekend when the Inspector General of Police, Mr. Idris Ibrahim and his entourage paid courtesy call on him at the Government House, Owerri, explained that his administration had few weeks ago empowered 3,500 women with N100,000 each and few days ago made 305 youths millionaires by giving them N1million each, adding that these gestures have helped in removing people out of the street and by implication reducing crime in the state.

The governor also hinted that the Nigeria Police contributed a lot in making him who he is today, stating that few years ago before politics, one could hardly count ten wealthy Nigerians without counting him because of his relationship with the Nigeria Police.

His words, “I had always proposed ideas on how to help the Nigeria Police. The first time that the Nigeria Police got One Thousand Jeeps was from me, Rochas, as a businessman and not as a politician. We often speak evil of the Nigeria Police and we have not been able to appreciate what the Nigeria Police stands for under the very painful situation they work, in the discharge of their duties. If there is one man that appreciates the Nigeria Police it is me. I first donated a college of administration, a brand new 200 bed hospital, mobile squadron unit, workshops. The right place to site Zonal Office is Owerri because of its strategic position. Federal government alone cannot provide the needs of the Police so I want to set the pace so that other states can follow”.

The governor thanked the IGP for the helicopter released to Imo State for surveillance, promising to reciprocate by supporting the police force in all aspects.

IGP Ibrahim in his speech said he noticed that Imo is one of the few states that you can read happiness from the faces of the citizens stating that the governor has given them a mobile squadron unit, a referral hospital and an administrative college, showing his love for the force. The IG also commissioned some security patrol cars.