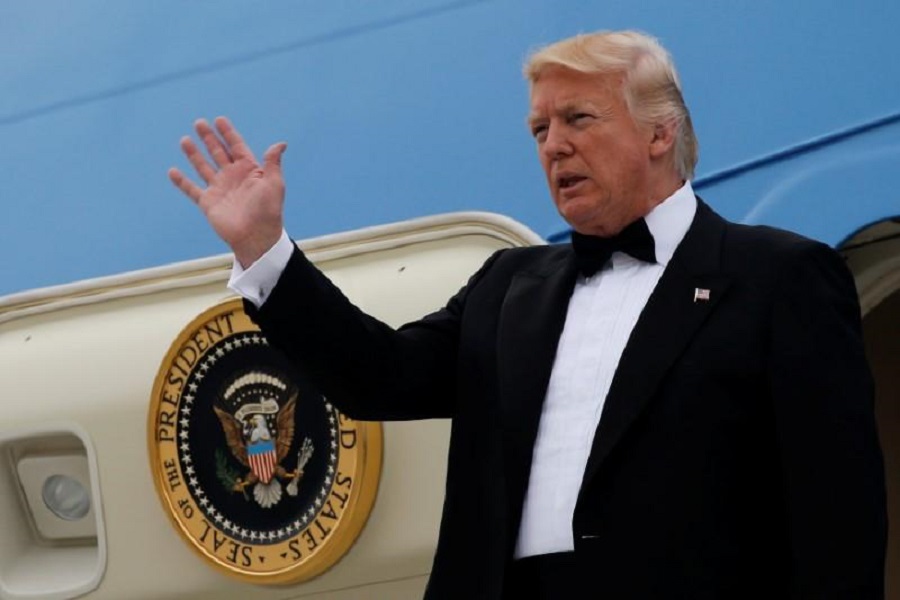 President Donald Trump’s firing of FBI Director James Comey is “much more serious” than Watergate and could arguably be enough to see him impeached now, says the historian who predicted the Republican’s shock election win.

Allan Lichtman, a professor of history at American University, came to national prominence after continuing his streak of predicting the outcome of every presidential election since 1984 last November. He also has written a book on Trump called The Case for Impeachment. It is no surprise then that he sees this week’s events as adding further fuel to the case for an investigation.

“He arguably could be impeached now,” he told Newsweek Friday. “Arguably he’s already obstructed justice and already violated the emoluments clause [regarding receiving gifts from foreign governments]. I’m not saying we should impeach him now, I’m calling for an impeachment investigation.”

Trump’s dismissal of Comey came in the midst of an investigation the former FBI head was leading into Russian interference in the 2016 election and possible collusion with the Trump team. The president has shifted the narrative after the White House initially claimed the termination was prompted at the recommendation of Deputy Attorney General Rod Rosenstein based off of Comey’s handling of the investigation into Hillary Clinton’s private email server.

“When I decided to just do it, I said to myself, I said: ‘You know, this Russia thing with Trump and Russia is a made up story, it’s an excuse by the Democrats for having lost an election that they should’ve won,’” he told NBC News Thursday.

Again, the story that there was collusion between the Russians &amp; Trump campaign was fabricated by Dems as an excuse for losing the election.

Trump also has insisted that Comey assured him on three separate occasions, including once over dinner and on another occasion over a phone call he placed to the then-FBI director, that he was not under investigation. It has been reported, too, that Trump sought repeated oaths of loyalty from Comey, despite the fact that his role is supposed to be independent and non-partisan. The White House has denied such demands were made.

Critics, including the Senate’s number two Democrat, Richard Durbin, have claimed that Trump’s actions regarding Comey, a man who was investigating him, constitute obstruction of justice—an impeachable offense.

“President Trump is dangerous because he may be obstructing justice in terms of the investigation that goes to the heart of our democracy, the accountability of the president,” Durbin, who represents Illinois, told MSNBC Friday.

“We see credible reporting that he may well be guilty of obstructing justice in the FBI investigation, first by demanding loyalty to him personally from the man investigating him,” Lichtman said. “That’s pretty blatant obstruction of justice. And then by firing director Comey and then in effect lying initially, or having his team lie in his direction, about the reasons for the firing.”

The two modern presidents who came closest to removal from office—Richard Nixon and Bill Clinton—were both accused of obstruction of justice. But Lichtman says Trump’s conduct is “vastly more important” than the allegations against Clinton over testimony about Monica Lewinsky and even more serious than the cover-up of the break-in at Democratic Party headquarters that brought down Nixon.

“The only parallel is Watergate, and this is much more serious,” Lichtman said. “What Trump is involved in is more serious because it involves a foreign power and the national security of the country.”

The firing of Comey was instantly compared to the infamous Saturday Night Massacre in which Nixon fired independent special prosecutor Archibald Cox. It was an event that turned both the opinion of the American public and of some of those within Nixon’s Republican Party against him.

And there have been signs that Trump’s latest actions crossed the line with some of his Republican colleagues.

Notably, Sen. Richard Burr of North Carolina, who chairs the Senate Intelligence Committee, said:  “I am troubled by the timing and reasoning of Director Comey’s termination.”

Ultimately, it will take widespread Republican dissension to impeach Trump, given that they control both the House and the Senate, something that is unlikely to happen anytime soon.

“Throughout his business career, Donald Trump was the master of avoiding accountability,” he said. “If he is true to his M.O. of more than 40 years, he may avoid accountability again by resigning. After all, it’s not like he goes back to some hovel out there in the woods.”