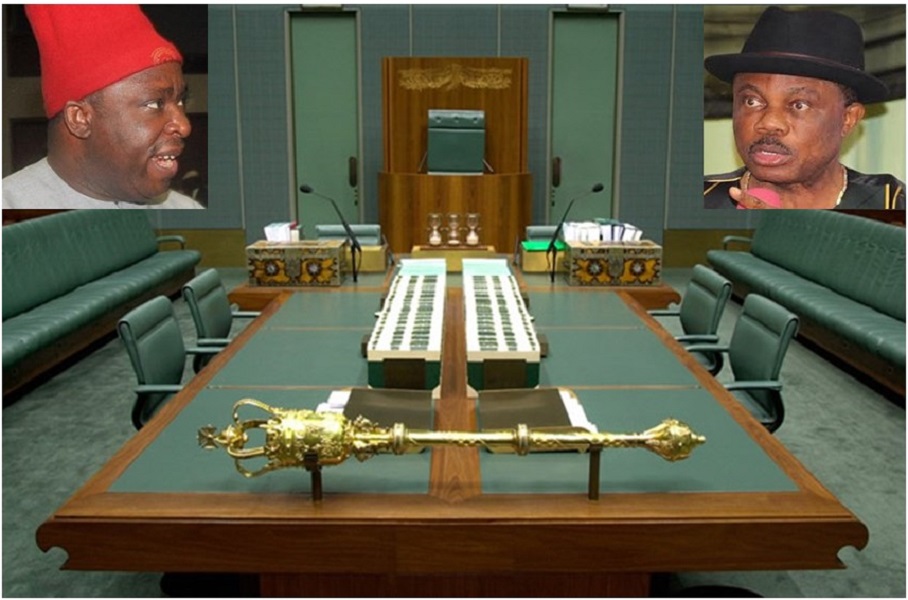 Information available to 247ureports.com indicates that the recent effort of the members of the State Assembly in Anambra to impeach the seating Speaker, Mrs. Rita Maduagwu may not be without external political arm engineering the plot from within the All Progressive Grand Alliance [APGA], the ruling party in Anambra State.

As gathered, the State Assembly which comprise of 30 members of which 28 members belong to APGA – had made number of attempts numbering up to seven [7] to impeach the Speaker. With each attempt, the State Governor, Willie Obiano is reported to come to the rescue of the Speaker by calming the nerves of the aggrieved lawmakers. The lawmakers were reported to be unhappy with the manner the Speaker had managed the affairs of the legislative chambers. “She has no respect for us” noted one member of the State Assembly to 247ureports.com.

However, a closer look into the unfolding fireworks reveals that an reported divide within the APGA may have resulted in the 7th attempt to impeach the Speaker. As our reporter gathered, the current Speaker was not the original choice of the State Assembly members for the position of Speaker. They had unanimously selected they choice, Ikem Uzoezie of Igbo Ukwu in Aguata LGA – who happened to hail of Old Aguata political block – and happens to also be a relative of the former National Chairman of APGA, Chief Victor Umeh. His mother had served as a Commissioner in the first Peter Obi term, and she hails from Aguluzigbo.

For this reason, the Executive Branch impressed on the Legislators to shelve the choice and pick Mrs. Rita Maduagwu representing Nnewi South 2. The State Assembly obliged. But the lawmakers still held on to their original choice even though their allowed the executive arm of the government to have their way.

From 2015 to date, the lawmakers had mounted 7 failed attempts at impeaching the Speaker.

But informed sources from Awka indicate that the 7th attempt may have been engineered by interested parties with the APGA. According to the sources, Chief Victor Umeh is said to have become unhappy with the Governor of Anambra State over issues concerning the Governor’s refusal to continue funding the exhaustive political battle at the Anambra central senatorial district against Peter Obi and Uche Ekwunife. The source noted that the Governor remains supportive of Victor Umeh’s political battles with Peter Obi but “not as before”. For this reason, the relationship between former APGA national chairman and the Governor had strained.

It is believed that the strained relationship between the two political gladiators resulted in Victor Umeh’s support of the unfolding impeachment fiasco to embarrass the Governor into returning to the battle against Peter Obi. Our source indicated that with the successful impeachment of the Speaker, Ikem Uzozie, a confirmed ‘boy’ of Victor Umeh, will mount the podium as speaker – and by extension – legislative powers would shift to Victor Umeh – in time for the gubernatorial elections of 2017.

The source explained that the 7th attempt at impeaching the speaker maybe the final attempt because their are determined to “remove the speaker at any cost“. According to the source, “they have support of some actors within the APGA“.  That is why they are not readily adhering to the pleas of the State Governor.

“They will come back on Apirl 11 to continue their impeachment“.