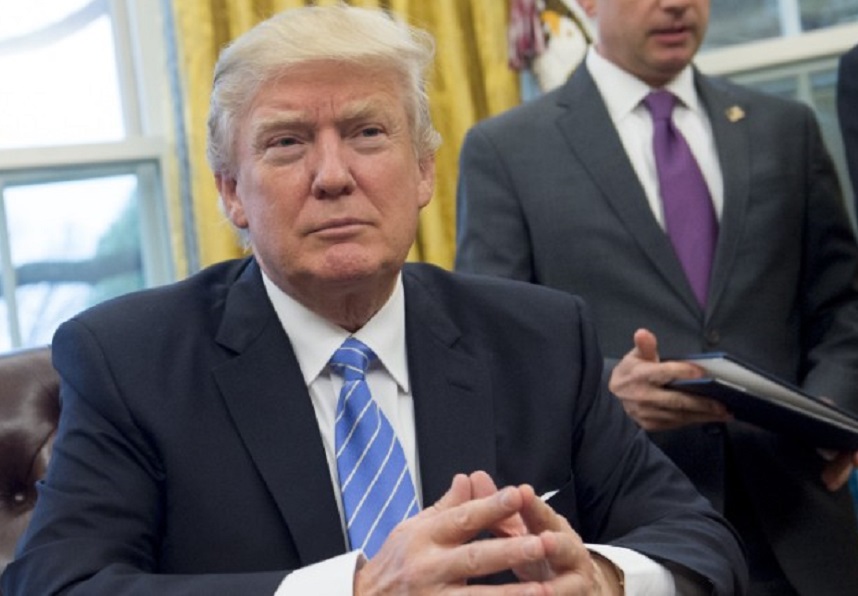 In a unanimous, 29-page opinion, three judges with the U.S. Court of Appeals for the 9th Circuit flatly rejected the government’s argument that the suspension of the order should be lifted immediately for national security reasons and forcefully asserted their ability to serve as a check on the president’s power.

The judges wrote that any suggestion that they couldn’t “runs contrary to the fundamental structure of our constitutional democracy.”

The judges did not declare outright that the ban was meant to disfavor Muslims — essentially saying it was too early for them to render a judgment on that question. But their ruling is undeniably a blow to the government and means the ban will remain off for the foreseeable future.

Trump reacted angrily on Twitter, posting just minutes after the ruling, “SEE YOU IN COURT, THE SECURITY OF OUR NATION IS AT STAKE!” The Justice Department, which was defending the administration’s position, said in a statement it was “reviewing the decision and considering its options.”

President Trump said on Feb. 9 that he looked forward to seeing the judges “in court” after a federal appeals court upheld the suspension of his controversial immigration order. (Editor’s note: Audio only.) (The Washington Post)

[Read the 9th Circuit’s opinion on the travel ban]

Washington State Attorney General Bob Ferguson, who had sued over the ban, said, “Bottom line, this is a complete victory for the state of Washington,” and declared the judges’ ruling “effectively granted everything we sought.”

The Justice Department could now ask the Supreme Court — which often defers to the president on matters of immigration and national security — to intervene. The Supreme Court, though, remains one justice short, and many see it as ideologically split 4-4. A tie would keep in place whatever the appeals court decides. The Justice Department could also ask the full 9th Circuit Court of Appeals to consider the question.

U.S. District Judge James L. Robart had last Friday granted the states of Washington and Minnesota only a temporary restraining order on the ban, and the parties are set to file briefs through next Saturday on the East Coast arguing for a more permanent, preliminary injunction. The appeals court judges noted their ruling was a “preliminary one,” and they were deciding only whether the government had “made a strong showing of its likely success” in getting the restraining order thrown out.

The ruling, though, is critically important — as Trump’s ban on refugees lasts only 120 days, and his ban on those from Iraq, Iran, Syria, Libya, Somalia, Sudan and Yemen lasts only 90 days. The judges also said that while the states of Washington and Minnesota had made serious allegations — and the impact of the order was “immediate and widespread” — the government had not pointed to any substantive evidence to support its need for the ban.

“The Government has pointed to no evidence that any alien from any of the countries named in the Order has perpetrated a terrorist attack in the United States,” the judges wrote. “Rather than present evidence to explain the need for the Executive Order, the Government has taken the position that we must not review its decision at all.”

The states have alleged that the executive order harms their businesses and universities, preventing some students and faculty from traveling abroad for fear of being stranded and diminishing the sales tax revenue they receive.

Legislators and others who had opposed the ban hailed the judges’ ruling and urged Trump to back down.

“President Trump ought to see the handwriting on the wall that his executive order is unconstitutional,” said U.S. Senator Chuck Schumer (D-N.Y.). “He should abandon this proposal, roll up his sleeves and come up with a real, bipartisan plan to keep us safe.”

Sen Patrick Leahy (D-Vt.) said, “If the President were serious about bringing our country together and keeping us safe, he would rescind this arbitrary and discriminatory order and recall what makes our country great.”

Federal immigration law undeniably gives the president broad authority to bar people from coming into the U.S., stating that if the president finds “the entry of any aliens” would be “detrimental” to the country’s interests, he can impose restrictions. But lawsuits across the country have alleged that Trump’s particular order ran afoul of the Constitution in that it intentionally discriminated against Muslims.

At a hearing Tuesday, Justice Department lawyer August Flentje vigorously disputed that the measure was intended to target Muslims. In their ruling, the judges did not reveal their opinion on that question, though they noted Washington and Minnesota had “offered evidence of numerous statements by the President about his intent to implement a ‘Muslim ban’ as well as evidence they claim suggests that the Executive Order was intended to be that ban.”

Former New York Mayor Rudolph W. Giuliani recently said publicly: “So when [Trump] first announced it, he said, ‘Muslim ban.’ He called me up. He said: ‘Put a commission together. Show me the right way to do it legally.’ ” On the campaign trail, Trump himself called for a “complete and total shutdown” of Muslims entering the U.S.

The appeals court judges had questioned both sides skeptically at Tuesday’s hearing, seeming particularly interested in what evidence Trump relied upon in implementing his order, and what limits the Justice Department saw on the president’s authority to set immigration policy. While Flentje urged them to restore the measure completely, he also at one point offered a fallback position. The judges, he suggested, could limit Robart’s order so that it only applied to foreigners previously admitted to the country who were abroad now or those who wished to travel and return to the United States in the future.

They declined to do even that, saying, as written, the president’s executive order could apply even to green card holders — which it once seemed to do, though the White House counsel later issued guidance saying it did not. The judges said the Justice Department had “offered no authority establishing that the White House counsel is empowered to issue an amended order superseding the Executive Order,” and “in light of the Government’s shifting interpretations of the Executive Order,” they were not convinced that guidance would hold.

Trump and his supporters have pressed the case that the short-term stoppage on refugees and immigrants from the seven countries is necessary for national security reasons, and they have leveled blunt criticism at the courts. Trump went so far as to suggest on Twitterthat if an attack were to happen, the judiciary were to blame. On Wednesday, he denounced arguments about his order as “disgraceful” and said “a bad high school student” would understand the broad authority the law gives him to impose immigration restrictions.

A day earlier, Homeland Security Secretary John Kelly told Congress he thought judges might be considering the issue from an “academic” perspective instead of the national security lens through which he views the world.

“Of course, in their courtrooms, they’re protected by people like me,” Kelly said.

Federal courts in New York, California and elsewhere already had blocked aspects of the ban from being implemented, although one federal judge in Massachusetts declared that he did not think that challengers had demonstrated that they had a high likelihood of success. The case before the 9th Circuit, though, was much broader than the others, because it stemmed from a federal judge’s outright halting of the ban.