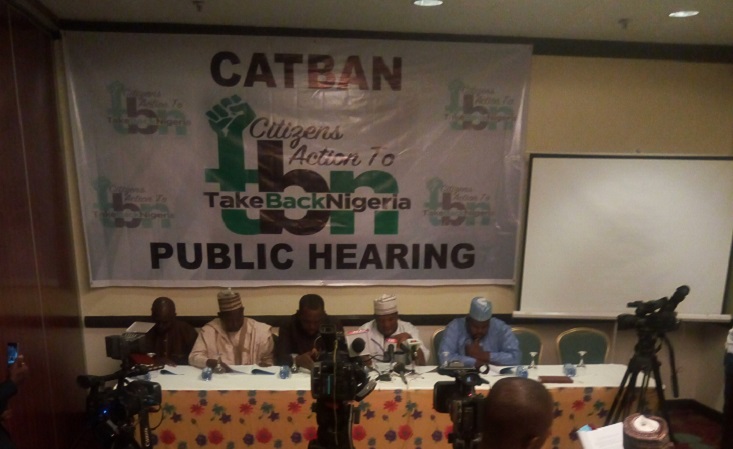 An independent investigations conducted by a Civil Society organisation on the platform of Citizens Action To Take Back Nigeria (CATBAN) into the allegation of abuse of the Public Procurement Acts in contract awarded by the Presidential Initiative on North East (PINE) has revealed contrary, thereby exonerating by the Secretary to the Government of the Federation Engr. Babachir Lawal.

The CSO, who happened to be the first group that demanded the resignation and prosecution of Engr. Lawal, had embarked on a facts finding mission to the North-east part of the country to unravel the truth behind the allegations raised in an interim report by the Senate ad-hoc committee.

Presenting the findings to newsmen in Abuja Tuesday, after a well researched documentary showing the plights of the North-east residents, the group said most of the claims by the Senate ad-hoc committee were “unfortunate lies. “

In the documentary, some of the respondents were seen commending the Presidential Initiative on the North-east (PINE) for doing what is described as “remarkable job”.

The Co-convener of CATBAN Ibrahim Garba Wala, told newsmen that the testimonies of people they met and the evidence before them proved that it was a worthwhile contract that was executed to the benefit of the people.

“CATBAN can assert with authority that the contract was indeed carried out. The claims that it was meant to clear grass in IDP camp or that nothing has been done are nothing but unfortunate lies.”

The group findings according to the report, revealed that the said grass cutting contract was originally tagged “Award of contract for removal of inversive (invasive) plants along river channels  and 115 hectares of simplified village irrigation operation in Your state.”

It was also discovered that document from PINE revealed that Rheolavision was not the main contractor that got the job. “Rheolavision was engaged only as a consultant even though the Senate committee created the impression that the company of the SGF executed the contract.”

The group also said it discovered political undertones behind the scandal, saying, “we understand this is why one of the state government officials specifically told the Senate Committee that PINE had not done anything in their state despite our on the spot assessment which shows clear evidence of clearing /evacuation of invasive plant species and irrigation operation on the 115 hectares of land.”

Another revelation CATBAN made available showed that the SGF Engr. Babachir Lawal, actually resigned from Rheolavision Engineering and all the other companies he had shareholdings in through a letter if resignation to his lawyers,  D. D Azura and co, on the 28th of August 2015.

“CATBAN alongside the local NGOs went to the Likori bridge in Marma channel on the Hadeja River. We found the first project sign post which consists of the contractors’ and consultants’ details.”