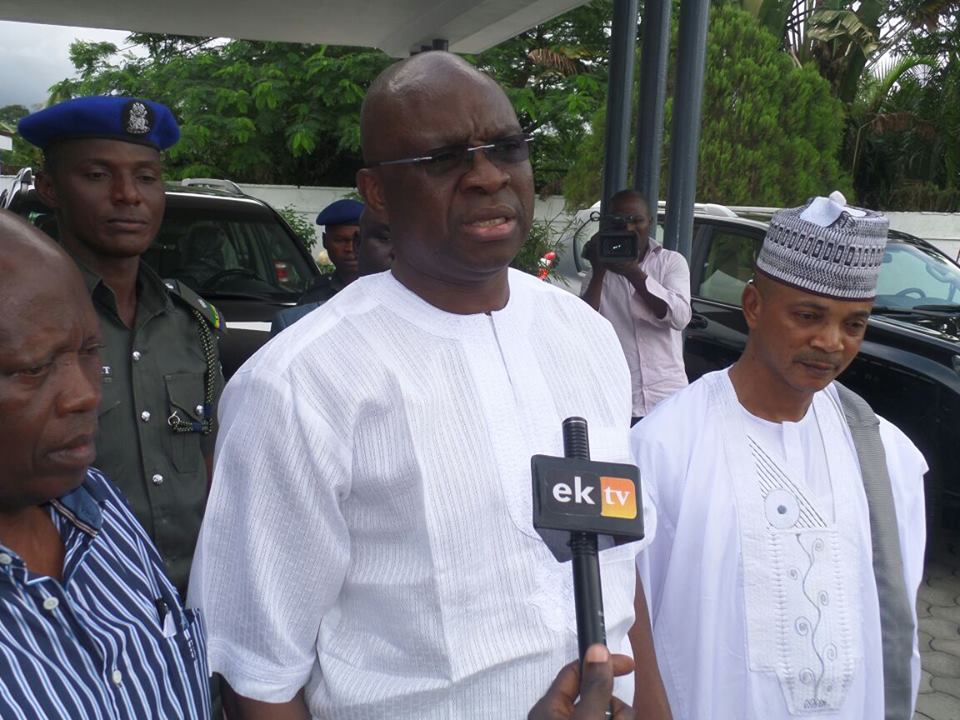 Ekiti State Governor, Mr Ayodele Fayose has once again declared that
President Muhammadu Buhari was only fighting his perceived political
foes under the guise of fighting corruption, while at the same time
trying to make sure that no opposition politician will be strong
enough financially to contest against him in 2019.

He said for the country to move forward, “the president must create
opportunities beyond political consideration. As it is, the body
language of the president speaks volume and must change.”

According the his Special Assistant on Public Communications and New
Media, Lere Olayinka, Governor Fayose, who was speaking on AIT Kaakaki
program today, questioned the rationale behind the President’s
directive to the Attorney General of the Federation and Minister of
Justice, Shehu Malami to investigate the Department of State Services
(DSS) report on the acting chairman of the Economic and Financial
Crimes Commission (EFCC), Ibrahim Magu.

“Magu was indicted by their own DSS and they are still saying the AGF
should investigate, is AGF the police? After Magu had been indicted by
the DSS, what are they investigating again? Are them saying DSS report
is no longer credible?

“As far as I am concerned, President Buhari is not fighting any
corruption. He is fighting his political foes. They are just trying to
make all Nigerians paupers so that when they share N1,000 at the
polling units, it will be like N1m.

“God is a God of single-standard, not dounle-standard. This Buhari’s
govt is a govt of double-standard.”

He lamented that President Buhari has returned the country to 1984,
saying; “When you see my past, you can project my future.  There can
be no future without the past. What is happening in Nigeria now are
the same as 1984.”

When asked whether or not the 16 years of Peoples Democratic Party
(PDP) in power should not be seen as responsible for the county’s
present problems, Governor Fayose said; “May be we should even return
to that past because in that past, Dollar was N200 and one bag of rice
was N8,000.

“If nothing was wrong with the Old  Testament, there would not have
been any need for the New Testament. They promised us a new testament,
let it be a new testament indeed.

“Nigeria and Nigerians don’t need blackmailers in government. Most of
those in the APC now have been in the PDP. Chief Olusegun Obasanjo,
who is their landlord was president for eight years under the PDP. My
brother, Aminu Tambuwal who is now the governor of Sokoto State was
Speaker of the House of Representatives as PDP member.

What then are they talking about?

“He who lives in glass house should not throw stones. Nigeria is a
country where the common man knows when you are deceiving them. When
Nigerians are suffering, you are spending N2 billion on entertainment
at Aso Rock.

“It is amazing that the president is still complaining close to two
years that he won election.”

On payment of workers salary, the governor said; “Apart from Lagos,
I’m the next governor owing less in terms of salary. I’m conscious
about the well-being of my people. If I have the resources of most
state, I will turn Ekiti beyond what we are doing now.”

While reaffirming that the All Progressives Congress (APC) will be
roundly defeated in any future election in Ekiti State, Governor
Fayose said;  “If your mother’s man friend is stronger than your
father, you will be forced to address him as daddy. No doubt, I’m
their (APC) daddy.

I was out of office for eight years. I came back to defeat an
incumbent. When you defeat APC, they give you series of excuses.  I’m
a grass root politicians. If they call for election tomorrow I will
defeat them.

He warned against plotting his downfall, saying; “I’m a nation of
Israel surrounded by the Philistines.

“Anyone on any seat of power looking for my downfall, either at the
federal or state level will be removed in 2017.”