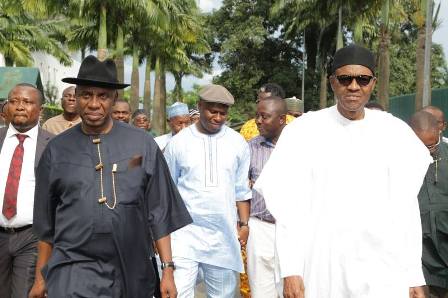 About 6 months ago when political parties began their primary elections to choose their representatives for the various elective posts across the federation, many didn’t know where the pendulum would swing.

To the out going ruling party, PDP, they thought it will be business as usual, all they needed to do was to clinch their party’s ticket for the various elective posts and wait till they get to the over-crowded bridge before thinking of crossing it.

The emergence of General Muhammadu Buhari as APC’s presidential candidate turned the tide which led to a band wagon effect across the federation coupled with INEC’s boss, Prof. Jega’s uncompromising stance on the use of permanent voter’s cards and card readers.

When many politicians embarked on this political journey, they never gave it a thought that General Muhammadu Buhari and his wind of change mantra would gather as much support than he did in previous elections. Buhari’s overwhelming victory at the presidential polls shattered their plans at the state level. In order not to be swept away by the political tsunami raging from the centre, the political Shenanigans in collaboration with some repugnant political turn coats who does not want to be caught in the web of change manipulated and rigged the elections in their states.

The general elections has come and gone with it’s winners and losers, the pandering predilections that followed suit is gradually fading away, some winners and their would be larceny of aids have confined themselves in solitude. While others are getting ready to take over the mantle of leadership, there seems to be deadening silence in some quarters.

The premise of this piece is for how long will many of these soon to be sworn in elected officials last in office? The emergence of the incorruptible czar, General Buhari as president-elect is already sending shivers down the spines of many and no one would want to be found wanting in the discharge of his/her duties before and after May 29th, when the president-elect will be sworn in as the substantive president of the emerging Nigeria.

So far, the revelations at the on going tribunals against the legitimacy of the elections that returned elected officials in some states are too damning and outrageous.

I don’t need a political clairvoyant to foresee what will happen in the next 6 months, my wager is that in less than 6 months from now, both the state tribunals and law courts will start upturning the electoral victories of some elected governors, senators and honorable members. They will vacate the seats they have been illegally occupying for the legitimate occupants. It has happened in the past, we have seen an elected governor that didn’t last up to a month in office, we have also seen 6 months, a year, 3 year term governors and several other elected officials whose victories were upturned at the law courts. What still baffles me is that no one has been jailed for electoral malpractices in the past. Will the incoming change at the centre break the jinx by enacting laws that will send electoral offenders to jail?

What an exercise in futility? After sharing all the money, getting all the endorsements from religious bodies, babalawos, traditional rulers, market women etc.

What shall it profit politicians to instigate their people to rise up against each other and turn their states into theatres of internecine wars, motivate vulnerable youths to go risk their lives in the field, disrupt the electoral process, snatch ballot boxes and at the end of the day lose their seats in the courts of law?

When A Guard Becomes A Thief – By Sulaiman Maijama’a