…Massive arms including anti-aircraft guns, rocket propelled grenades recovered after visit to Borno… It would have been a national tragedy had it occurred. But, according to intelligence sources, security agencies saved the situation.

The story is that insurgents allegedly planned to attack the plane of President Goodluck Jonathan while flying into Maiduguri, Borno State capital, on Thursday for his two-day visit.

Borno is the hotbet of the Islamist group, Boko Haram.

The alleged recovery of three anti-aircraft guns, two technical vehicles mounted with anti-aircraft stands and 10 rocket propelled grenades, in a cache of arms, in Maiduguri, on Friday, lent credence to the claim of the plot to attack the president’s plane.

The twist to the story, however, is the claim by some security sources that the Islamist group had hoped that the entire security apparatus in Borno would be diverted for the president’s visit, to enable it deploy the massive arms to also attack the facilities where its members are being held in the state with a view to setting them free.

Whatever may have been the Islamist group’s plan, security agencies alleged that close monitoring foiled it.

Spokesman for the JTF in Borno State, Lt. Col. Sagir Musa, in a statement emailed to journalists, yesterday, hinted that intelligence by informants led to the foiling of the insurgents alleged plan. 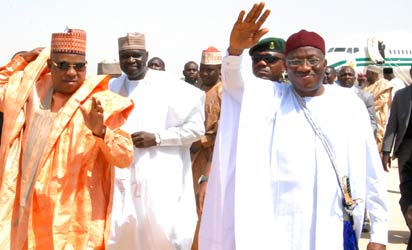 The latest was the one conducted at Bulabulin, Bayern Quarters and Jajeri in Maiduguri metropolis between 3 – 8 pm yesterday Friday, 8 February, 2013. During these operations under the period stated, there were exchange of fire that led to the death of 52 Boko Haram members including ten commanders of the sect. 70 terrorists were also arrested. In the period under review, the JTF lost two men, three were wounded and no civilian casualty was recorded. The under listed weapons, ammunition, uniforms and other items were recovered in yesterday’s (Friday) operation:

Sunday Vanguard learnt, yesterday, that  security agencies have launched investigations into how the weaponry which, in size, quality and quantity, were capable of waging a full scale war either against air  or land opposition and with which targets kilometers away could be successfully taken out, were assembled.

“The fact that assorted uniforms of security agencies, especially those serving in the Joint Task Force were  recovered in the Friday operation, is  fueling the intelligence that there was indeed a plan by the group and their sponsors to breach the security of the president”, a source added.