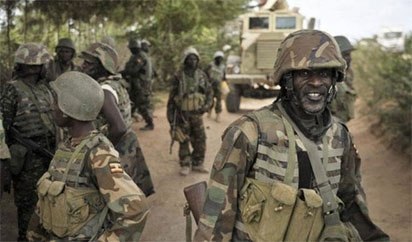 The Nigerian Army says it has neutralised a number of Boko Haram/Islamic State of West Africa Province (ISWAP) terrorists in different encounters in parts of Borno and rescued 12 women and four children from their hideouts.
The Nigerian Army Operations Media Coordinator, Col. Aminu Iliysu, disclosed this in a statement on Thursday in Abuja.
Iliyasu disclosed that the terrorists fell to the superior fire power of the troops of Operation Lafiya Dole in an encounter at Mafa Local Government Area of the state on Dec. 1.
He said that after the encounter which lasted for about 40 minutes, the terrorists suffered heavy casualties in both men and equipment.
According to him, the dogged troops of the Unit embarked on a hot pursuit of the scampering insurgents and exploited their withdrawal route.
“During the exploitation, troops recovered three Boko Haram bodies of which two of them were strapped with suicide vests.
“Additionally, one Boko Haram criminals’ Gun Truck, one motorcycle, one Anti-Aircraft Gun, one PKT Gun, one Rocket Propelled Gun Tube were captured by the troops.
“Other items that were equally captured by the troops include two Rocket Propelled Gun bombs, two AK 47 Rifles, 25 Rounds of Anti-Aircraft Gun, 723 Rounds of 7.62mm Special ammunition, 51 Rounds of 7.62mm NATO ammunition and 52 Rounds of 7.62X54mmR (PKT) ammunition.
“Other recovered items are, surgical kits, Boko Haram terrorists uniforms and warm clothing were also captured by the gallant troops,” he said.
Iliyasu also disclosed that two female suicide bombers attempted to infiltrate the Defence Company of 26 Task Force Brigade Garrison location at Gwoza in another encounter on the same date.
He said that the soldiers deployed on sentry duty identified the criminal intruders and neutralized them before they could detonate their suicide vests.
Iliyasu said that the Chief of Army Staff, Lt.-Gen. Tukur Buratai, had commended the troops for their exceptional display of patriotism, professionalism and responsiveness.
“He, however admonishes them to remain resilient and continue to be steadfast in the fight against criminal elements across the nation,” he said.