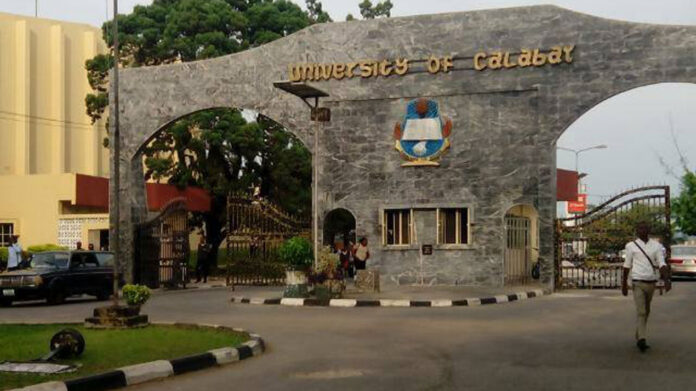 Advertisement
The University of Calabar, UNICAL located in coastal Calabar Municipal, an ancient city with a long tradition of culture and contact with western civilization is a second Generation Federal University. Founded in 1975 under the National Higher Education Expansion Programme of the Federal Military Government of Nigeria, the University has grown to become one of the best-ranked universities in Nigeria and the 65th best ranked University in Africa from just 896 students in 1976.

International Organisations including the United Nations have been advocating for Universities to adopt the National Gender Policy, the policy represents a set of minimum standards expected of the Nigerian government to meet its mandate for gender equality, good governance, accountability, and being socially responsive to the needs of its vulnerable group. The University of Calabar has been leading the pack of Nigerian Universities as it is set to adopt the Gender Policy, the UNICAL Senate is poised to give the policy the green light once the Academic Staff Union of Universities Strike is suspended. The draft policy has been at the senate before the commencement of the strike action. Apart from the Gender Policy, the University of Calabar is one of the few which has gender-equal management in the country and Africa at large.

Two years after her appointment, with her utmost desire to foster a bold and innovative spirit in faculty teaching and academic excellence, she won a 6-months postgraduate scholarship to Jordan-Hill College of Education, Glasgow, Scotland, under the World University Service (WUS) World-Wide Fund for Nature (WWF) and the Nigerian Conservation Foundation (NCF) in a keenly contested interview for staff of the Institute of Education. On her return from the United Kingdom, she was placed in charge of the WWF/NCF-funded schools and Community Education Programmes. She subsequently facilitated the development of the degree program in Environmental Education at the University, which has since resulted in the establishment of a full-fledged and flourishing Department of Environmental Education.

– The Deputy Vice-Chancellor (Academics)
Angela Ekanem Oyo-Ita, a Professor of Community Medicine and a Former Commissioner for Health of Cross River State is the head of the Academic Activities at UNICAL, she is responsible for ensuring effective and efficient academic staff development as well as ensuring effective academic development of students. Professor Angela is also a Fellow of the West African College of Physicians (Community Health). She has served in several capacities at the University of Calabar Teaching Hospital.

– The University Librarian
Professor Aniebiet Inyang Ntui is an Associate of the European Union Research Initiative – Europeana, the University of the West of Scotland’s Centre for African Research on Enterprise and Economic Development, and the University of Glasgow’s UK-COP 26 Universities Climate Network. She has served as a Consultant of Information Management to the United Nations Educational, Scientific and Cultural Organization, United Nations Development Programme, and the World Bank.

Recently suggested by an Op-Ed as one of the possible candidates to serve as the Minister of Education in the Peter Obi Lead Administration if he can successfully win the February Poll. She is one of the Most Read Researchers in Nigeria according to statistics on the Web of Science Site, with over 500,000 reads on the ResearchGate Portal.