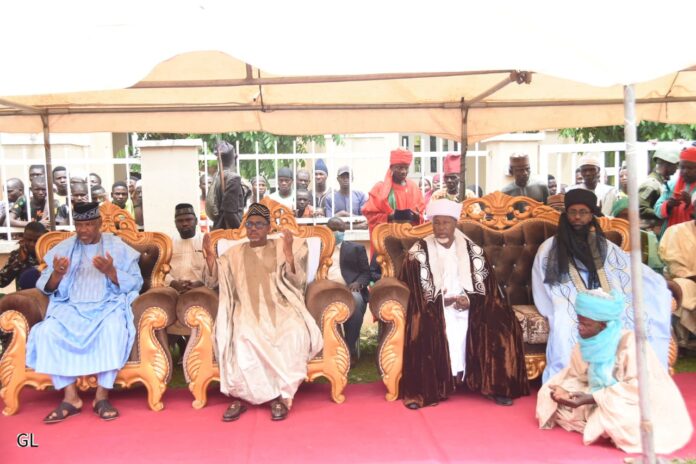 Gunmen suspected to be kidnappers ,cattle rustlers have killed A 75-year-old man called Alhaji Katu Ma Dukkuna and abducted his three grand children, rustle his cattles in Shafa ,village of Duguri District in Alkaleri Local GovernmmentAreaof Bauchi State, as the Governor of Bauchi State pledge to recruits 2000 youth as vigilantees to fight banditry across the State.
Residents of Shafa told reporters yesterday in shafa when Governor Bala Mohammed went to commiserate with the familiesof the deceased. They said the kidnappers went to abduct Late Katu Mai Dukkuna, when they stormed his settlement, with the intention of kidnapping him for ransom but he resisted the attempt and they shot him to death at close range.
A resident of the area, Malam Sunusi told Journalists that the gunmen had earlier visited his farm but when they could not find him, they went to the house where they tried to kidnap him but ended up killing him and went away with three of his grandchildren – two females and a male.
The villager added that the kidnappers also took away some of his cows leaving the family in a mourning mood; a development that has now thrown the entire village into a panicking situation.

Another villager, Sani Umar said that for about a week before the incident, the gunmen have been coming to the village looking for who to kidnap considering the fact that most of the people are cattle breeders and farmers thinking that they have money.
He said that as of the last time the kidnappers made contact, they were demanding the sum of N50m ransom for the 3 abductees before they will release them,
He Said that the amount is on the high side but added that negotiations are ongoing in order to secure their release.
The villagers,called on the state government to come to their aid as the activities of the bandits have negatively affected their existence as they can no longer go to the farm in the rainy season.
Younger brother to the late Katu described the incident as a surprise to the family.

He said , his late elder brother was a peace lover who contributed to the development of the village.
He called on the state government and security agencies to team up and rescue the children who he said had spent about 5 days in captivity and may be in danger due to the rainy season.
This is coming a few weeks after several people were killed and some abducted in Toro, Alkaleri, Tafawa Balewa, Misau and Ningi local Government areas of the state.

The incidents prompted the Governor to embark on assessment visits to the affected communities to commiserate and assure them of his administration’s commitment to end banditry and give them hope that Government is doing everything to protect their lives and property.
Governor Bala Mohammed commiserated with the people of the area over the incidents
The Governor said that “A lot of criminality is happening here, maybe because we are far from the centre. A lot of atrocities are happening here because the economic activities here are much. We have the best lush vegetable soil, agricultural soil where our people have been farming for so many years.
“We have so many minerals here that are why we are having problems. We are trying our best, the local government is trying its best, the state government is also trying its best., The federal government is also doing its best”, he stressed.
He said , “Our policy of community engagement has taken us everywhere in the State where this ugly incident has happened. We went to Toro, we went to Gwana District, Mansur and then Tafawa Belewa to engage with the people”.
Governor Bala said that “But as the security agencies would always say, this cannot happen without collaboration with some obnoxious elements within us, including some members of our traditional institution, even some security personnel, therefore we have already requested the two traditional district heads to be circumspect to look inward, because we are looking, inward because we too we are looking so that we can arrest this issue of compromise and information giving to the bandits.
“There is no way somebody from Zamfara or somewhere will visit that secluded place like Shafa and kill someone unless he has an informant. The security agencies cannot do it alone. And that is why we are establishing a system of feedback”.
He said that “And I heard that some people within us are even feeding the bandits in their secret place by giving them grains and flour, that is the report I received, and we are going to go after such people no matter how highly placed they are to make our people safe and secure. ”
Governor Said he will recruits 2000 Youths in to vigilantee to help the government in the fight against banditry,cattle rustling across the State.

He listed the affected local government areas that included Alkaleri, Tafawa Balewa, Toro, Ningi, Misau, and Ganjuwa.
He said his administration’s is determined to take drastic action against anyone found supporting or hiding criminal elements in the state.

The Governor advised people of the state to be vigilant as well as expose any suspicious element to security agencies, promising to prosecute anyone found feeding the bandits with information and warned local communities against taking food to yhe bandits in the bush.

He commended the effort of various security agencies for their rapid response, calling on the state commissioner of Police to redeploy some personal who work for some period in the area.

The State Commissioner of Police, Umar Mamman Sanda who spoke on behalf of the Heads of security Agents in the state called on the people to assist by exposing suspicious agents within the community.
He commended the Governor for his support to the security agencies working in the state and called on the people to support the efforts of the government in fighting insecurity.
The Chairman of Alkaleri Local Government Hon Yusuf Garba said that the visit has given the people of the area more hope and courage that the government is concerned about their security and pledged the support and unalloyed loyalty of the people of the area to the government.