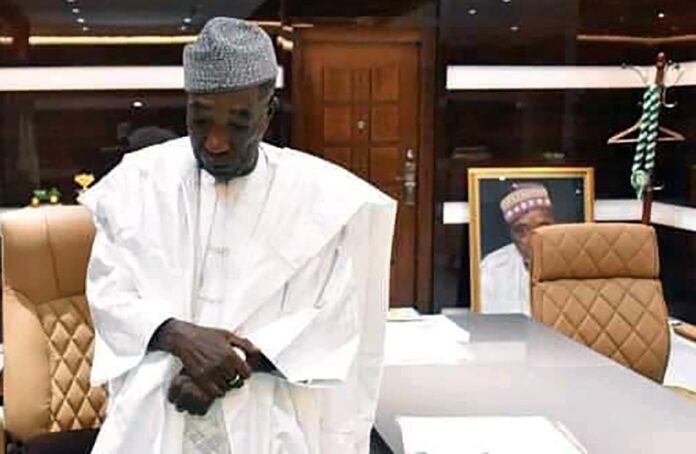 Alhaji Mohammed Sabo Nanono, who was relived of his duty as Minister of Agriculture and Rural Development, on Wednesday, has been under scrutiny over a number of issues, which drew adversaries to him.

Since taking charge of agric ministry on August 21, 2019, Nanono has been involved in one controversy or the other.

Perhaps, the most wave Nanono made as a minister since his appointment two years ago was his gaffe that a N30 meal could be enough for an adult Nigerian, in response to criticism on the economic hardship during a radio interview.

First, his attempt to force a change in the leadership of All Farmers Association of Nigeria (AFAN) drew him into a legal battle with the association. With a case on the issue still in court, Nanono continued to recognise a faction of the leadership.

N30 million for the construction of a mosque

Nanono was also fingered in a number of alleged infractions such as awarding N30 million for the construction of a mosque which many considered as unjustifiable.

Award of contracts to shadowy companies

The minister was also accused of awarding contracts to two shadowy companies worth several billions to buy grains at a time the market was extremely volatile, triggering a price hike.

Nanono was also accused of spending over N1 billion to renovate the ministry’s old headquarters when the building the ministry bought for over N7 billion was abandoned in Central Business District, Abuja

Under his watch, the ministry came under investigation for alleged misappropriation of N16 billion by the Independent Corrupt Practices and Other Related Offences Commission (ICPC)

The minister had openly attacked the Central Bank of Nigeria’s policy on Anchor Borrowers’ Programme, canvassing for it to be moved to the Ministry of Agriculture.

For over two years, the minister has been talking about importing tractors under a bilateral arrangement with the Brazilian government for mechanisation but that did not happen. He has not also been able to drive the president’s pronouncement of recruiting over 50,000 agric extension workers.

Farmers from the South-South have also accused the minister of neglecting their region in agric policies and programmes.

They said he did not have any strong policy on tree crops. Since taking over office, the federal ministry has not been able to drive success programme of the administration as most of the programmes are domiciled with other agencies of government outside the ministry.

Despite all these, however, one of the major successes of Nanono has been his ability to champion the National Fertilizer Quality Control Act 2019 as a vital component of the Agricultural Policy of the present administration and the bid to reposition Nigeria fertiliser industry and the agro-economy from oil and gas to agribusiness.

Nanono also supervised the launch of the RUGA project where he has awarded the construction and rehabilitation of facilities in the grazing reserves in Borno, Gombe, Niger, Nasarawa and other places to kick start the RUGA project under the National Livestock Transformation Programme.

During the lockdown, the ministry also procured fertiliser, seeds and some farm implement for a number of farmers to mitigate the challenges of COVID-19 impact on farmers across the country.

On seed, the minister has increased the capacity of the quantity of seed and seedlings produced in the country to up to 81,000 metric tonnes and has introduced policies that strengthened the seed sector.

Meanwhile, the mood in the ministry was that of excitement among some junior and senior staffers as many said they anticipated this long ago in view of the minister’s alleged involvement in many alleged shady deals as contained in leaked documents.