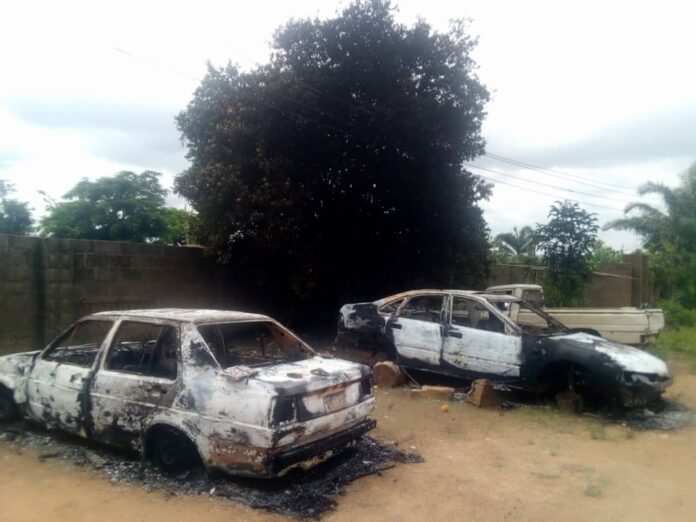 For the 7th day running, nightly siege on Atyap Community has continued with the death toll, number of churches and homes burnt rising.

Yesterday 13th July, 2021, two persons were killed as armed Fulani herdsmen invaded Magata and Magori villages in Atyap Chiefdom, Zangon Kataf Local Government Area (LGA) in Southern Kaduna. The father and son were killed in Magata where the assailants also burnt 8 homes and the Catholic church in the village. The attackers then moved to the next village, Magori, but met a deserted place. They took their time, looted the village and loaded their bounty into the five Hilux vans they were driving in and burnt down all the 19 houses in the small village. The attackers then returned to Makarau that was attacked on Monday and burnt down the ECWA and Anglican Churches whose two pastoruims were burnt in last Monday afternoon attacks.

Meanwhile, our members of the Amawa ethnic nationalities who settled in an Atyap community called Badawa, a remote farming community close to the banks of River Kaduna, under Gora ward, have reported that 5 of their kinsmen were killed and 12 homes, and 45 cows rustled on the 11th July, 2021 after they were attacked by armed herdsmen.

This brings to 40 the number of persons killed, 254 homes and 7 churches burnt in an unbroken and unrestrained violence unleashed on poor, armless innocent farmers in Atyap Chiefdom by armed herdsmen in the past 7 days. We have received information that the attackers are bragging that Atyap land and the entire southern Kaduna belongs to them and as such if our members would not leave, they would use terror and chase them out.

Currently, 108 Southern Kaduna Communities are under the occupation of armed herdsmen invaders some dating back to 2019.

Another dimension to the wickedness on Atyap land is that in every community attacked, the invaders took time to cut down swaths of fields of growing crops. The intention is to see that survivors starve if they ever return.

Women, children, the aged and infirmed are now moving out in droves in Atyap villages, some on foot carrying what they can salvage to wherever they may find refuge.

SOKAPU wants to use this medium to welcome Maj. General I.S Ali, new G.O. C, 3 Armoured Division of the Nigeria Army, Jos. We understand that he is also the new Commander Operation Safe Haven which covers most of Southern Kaduna.

We are informed that the Maj. Gen. I S Ali is a fine officer of high professional repute and a gentleman. He will find our people easy going, law abiding, decent, respectful, hard working and very cooperative. But we are averse to injustice and suppression, for which we have been informed, are traits he is also intolerant of. We wish him well.

Recall that yesterday we issued a detailed Press Statement which was well published. In the statement we gave details of the attacks that have occurred in Atyap land in the preceding six day in which 33 people were killed, 4 churches and 215 homes burnt. We insisted that it was part of an ongoing genocide in Southern Kaduna which took a turn for the worse from 2016 till date.