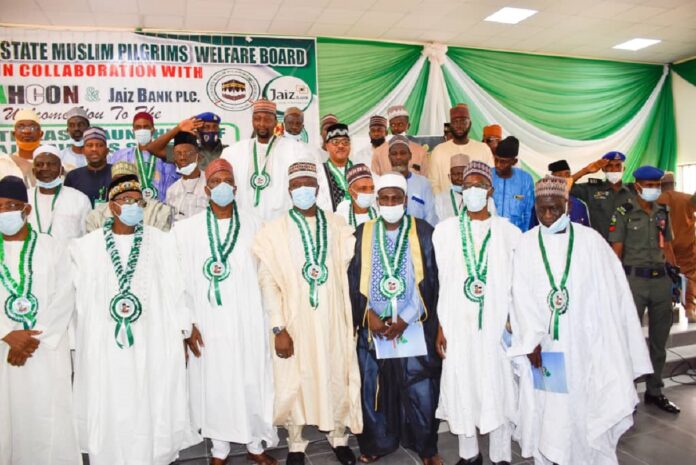 The states are Adamawa,Bauchi, Borno, Gombe, Taraba , and Yobe States.

Speaking at the North-east launching /sensitisation of the Hajj scheme at the new Hajj Camp, Adjacent Sir Abubakar Tafawa Balewa International Airport Bauchi on Thursday, Governor Bala said that keeping pilgrim fund in the newly introduced Hajj scheme is safe, reliable and free from any manipulation, adding, beside easing the Hajj processes, it will reduce the chances of redirecting the pilgrims’ funds for other activities outside Hajj operations.

He said the Hajj scheme came at the right time when various governments are withdrawing gradually from sponsoring religious activities, emphasised that Muslims will now be better prepared at their convenience to perform Hajj being one of the pillars of Islam.

“As a result of global economic melt down, which further aggravated by COVID 19, it is becoming difficult for the common man to perform Hajj.Infact, some have given up the hope of performing Hajj in their life time, however the scheme we are launching today, provide a platform to make that dream come true.

“The new concept demands that an interested person will open a bank account, after which the money will be used for projects such as investment in agriculture, value chain and voted industries, investment in power and energy, education, housing and health and other critical sectors of the economy”

”At the individual level, besides generating returns for the depositors, Hajj Saving scheme is believed to introduce such level of financial discipline and savings culture for the enrolled members and the generality of our people, especially those living in the rural areas” he said

In his remarks, the Chairman/CEO, National Hajj Commission of Nigeria (NAHCON) Alhaji Zikirullah Kunle Hassan said that the Hajj Saving scheme was designed to ease the cost of a fare to the holy land, adding that the choice of Bauchi state as host for other states in the northeast did not come as an accident but a decision that was carefully made because of the numerous contributions made to Hajj administration by his Excellency, Governor Bala Mohammed who has a long-standing history of working behind the scene on the frontline for Hajj matters.

“It is on record that the newly constructed Hajj modern camp by Governor Bala Mohammed is first among it’s kind in terms of state of the Art facilities and is ranked the best in Nigeria for now.We are also indebted to Governor Mohammed for the allocations of hectares of land to the Commission right in the heart and center of Abuja when he held sway as the Minister of the federal capital territory and provision of a well furnished office for our newly created outreach in Bauchi”

“let me reiterate that fact the introduction of the Hajj Saving scheme by the current board was premised on our abiding belief that for Nigeria Hajj management to be on the same page with other Islamic nations and in particular the digitalization of Hajj by Saudi Arabia authorities, the commission has come up with an alternative payment system. The idea which has been on the front burner for over a decade for which the previous board decided to build the foundation, has now become the cornerstone,” he said.

While giving a presentation on Hajj Saving scheme, the Managing Director JAIZ bank, Mallam Hassan Usman said that with the Hajj scheme, intending pilgrims who do not have the wherewithal, can do so by saving gradually, adding that they do not have to sell their personal belongings any more to pay for Hajj.

He listed the benefits of the scheme to include advance planning in feed, accommodation and flight schedules, offers subsidy in a future reduction in Hajj fares, job creation through the establishment of branches, aligning the entire system to the global system amongst others benefits.