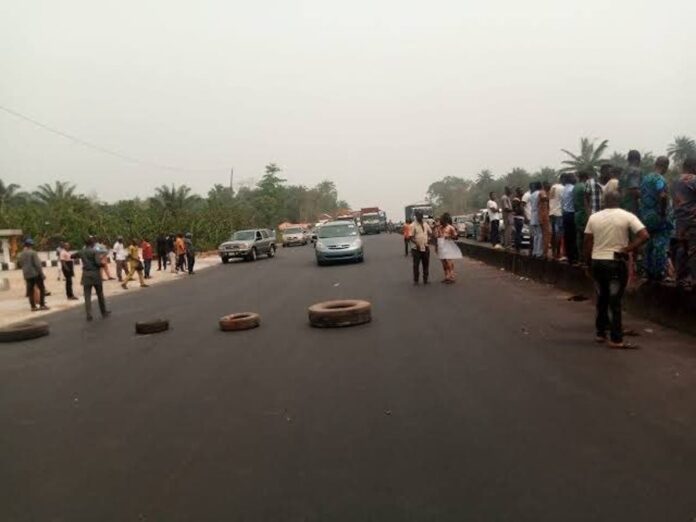 The Flicthers Association in Ondo State , on Monday, protested the alledged illegal extortion, molestation and coercion by the Ogun State Revenue agencies.

The protesters, who blocked the ever busy Lagos/Benin Road at Ajebamide area, a border community in Odigbo Local Council Area of Ondo State,  hindered the free flow of traffic movement for about 40 minutes.

The News Agency of Nigeria (NAN) reports that the protesters carried different placards  with inscriptions: “Stop  Unlawful Collection of N50,000 only from Our Members at Atoyo Junction”, ” Abiodun, Call Your People to Order”, “Stop Illegal Ticketing on the Highway” and “Unlawful Ticketing by Ogun State Govt. at Atoyo Junction”.

Leading the protest, Comrade Mayegun Oloruntobi expressed the association’s grievances against Ogun revenue agencies, which he described as inhumane.

“The government of Ondo State has created jobs by giving the association permission to work in forests in the state.

“But it was disheartening that the Ogun Govt. would stiffen the association’s means of livelihood through numerous and unnecessary ticketing while transporting their logs to Ogun State.

” We are Flitchers’ Association in Ondo State and  we pay to the government in Ondo State. Our government has created job through timber work so that we will not be jobless.

” The government has done this for us through our natural resources but anytime we cross our trucks  with goods to Ogun State, the state will bring illegal ticket worth 50,000 while we only pay N7,000 to Ondo State Government.

“And if we can’t pay, they will impound our vehicles and take them to Abeokuta and ask us to pay N2 million, ” he stated.

He appealed to Gov. Oluwarotimi Akeredolu of Ondo State to intervene in the matter within seven days so that it would not degenerate to crisis.

Also, Mr Sunday Aro, the state’s Secretary of the association, explained that all attempts to settle the matter with the Ogun State Government had proved abortive.

” All our efforts were to no avail. Last week, we met the Ogun State revenue agencies but nothing was done,” he said.

Aro enjoined all stakeholders and authorities to wade into the matter, adding that the association has provided jobs to no fewer than 10,000 workers  in Ondo State.

” We want authorities to intervene within seven days. We have some evidences on our members that have been molested and harassed including some of our women raped.

” This is not done anywhere. At Control Post in Ondo State, you pay only N7,000.

“We have written petition to Ogun State Commissioner of Police, the state Commisioner for Natural Resources, the state Attorney General because we don’t want to take law into our hands,” he stated.

Reacting to the development, Chief Alex Ajipe, the Consultant to the Ondo State Ministry of Natural Resources on Revenue, said that the government had confirmed the alleged extortion especially at Atoyo on the highway.

Ajipe noted that different kinds of money was being collected without any basis, describing the action as barbaric on the Federal Government road.

According to him, people should be allowed to ply the road without disturbance, having done the right thing.

He explained that though the Ogun State Government claimed ignorance of the extortion, different receipts issued bore the state’s logo and name.

Ajipe appealed to the association not to take law to its hands but  allow for more dialogue.