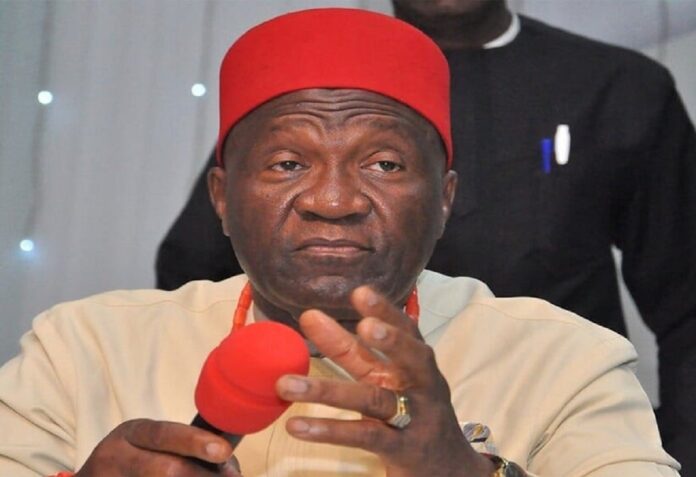 Secretary General of the Ohanaeze Ndigbo, Chief Uche Okwukwu, has filed a suit at an Abia State High Court, Umuahia , asking the court to declare the  Chief Enwo Igariwey electoral committee  set up by the President General of the organization, Chief John Nwodo,  as illegal, null and void.

Okwukwu also asked the court to hold that the Imeobi meeting convened by Nwodo, on December 20, 2020, at the Nike Lake Hotel, is also illegal, null and void. He, however, prayed the court to uphold the December 31, 2020 Imeobi meeting held at Owerri and the Prince Richard Ozobu electoral committee, as legal.

In suit No; Hu/9/2021, between Chief Uche Okwukwu (plaintiff) and Chief John Nnia Nwodo (Defendant), Okwukwu further asked the Court to set aside any decision taken by Nwodo and members of Ohanaeze Ndigbo at the Imeobi meeting of December 20, 2020 as being nugatory, null and void and of no effect, having not been summoned by the Secretary General in accordance with the provisions of Article 11 of the Ohanaeze Ndigbo Constitution.

Okwukwu also sought other reliefs such as; an order setting aside the purported electoral committee set up by Nwodo without due process and an order validating the Imeobi meeting held 31st December ,2020 , in Owerri and properly summoned by the Secretary General in accordance with the Constitution and all decisions reached therein as valid, authentic and subsisting.

He also asked for the sum of N50,000,000, as general damages as well as an order of perpetual injunction restraining the defendant, his agents, privies and servants from summoning any meeting of the national executive committee, Imeobi and national General Assembly or any other meeting at all without the knowledge of the plaintiff pending the hearing and determination of the substantive suit.”

No date has been for the hearing of the suit.

Nwodo had on December 20, 2020, convened an Imeobi meeting at the Nike Lake Hotel, Enugu and set up an electoral committee headed by Chief Enwo Igariwey.

However, Okwukwu convened another Imeobi meeting at Owerri where he set up a parallel electoral committee headed by Prince Richard Ozobu, claiming that Nwodo acted contrary to the Ohanaeze Ndigbo constitution.