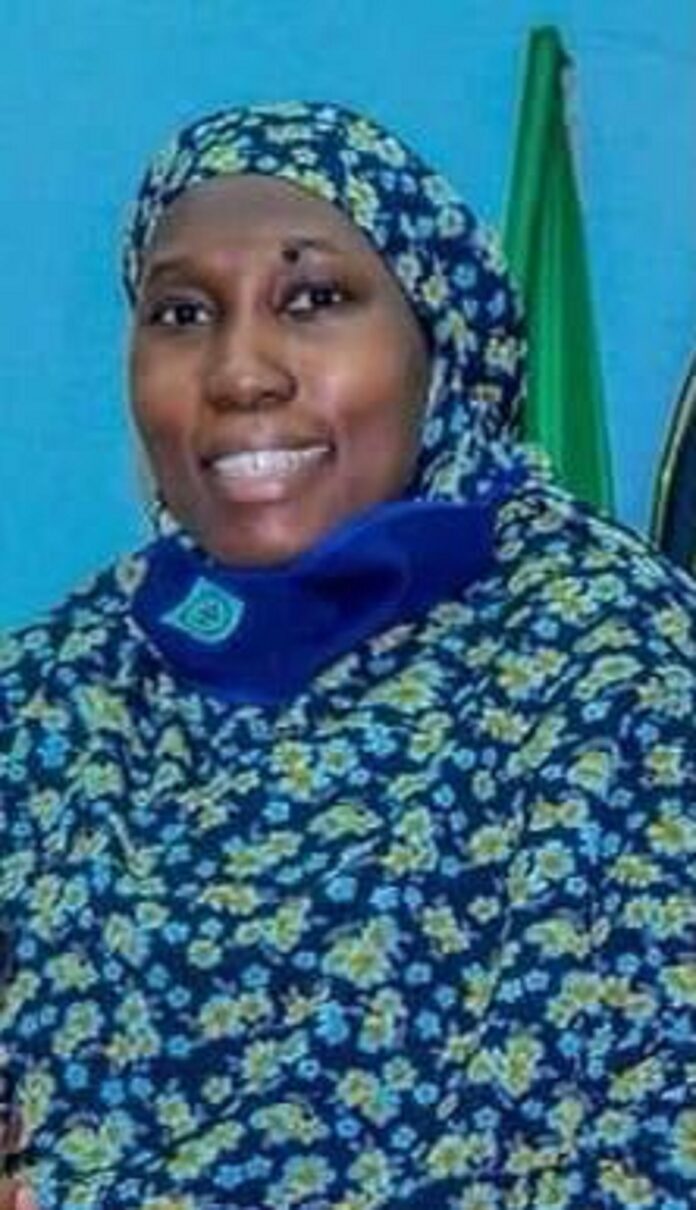 Doctor Amina Abdullahi Ganduje is the daughter to the current sitting governor of Kano State Abdullahi Umar Ganduje. Despite the fact that her father is the number one citizen of Kano State she is a host to may achievements to her name and you will be surprise to know that all those achievements have no connection with the fact that her father is at the helm of affairs of Kano state,she proves herself to be a woman of full potentials since her Undergraduate studies at the University of Maiduguri where she read MBBS (Medicine).

Her talents keep unfolding after her graduation when she worked with Kano State Ministry of health at HasiyaBayero Pediatric clinics as M.O. A casual flip into  her educational career will reveal to you the kind of woman GwaggonKanawa raised.She is not a lazy kind human being who would always want get things at the platter of gold, her doggedness in achieving big in her name is glaring, it will interest you to know that Doctor Amina at one sitting each passed her primaries, Part l and Part ll and suddenly became a fellow of West African College of Physicians within the shortest possible minimum period anyone could ever achieve. Concomitantly, while pursuing her fellowship ambition she also applied for field epidemiology training in Africa under CDC Atlanta Field Epidemiology Africa run by prestigious Ahmadu  Bello University Zaria (ABU) a very competitive,high tasking and super rigorous M.sc Field Epidemiology training available and obtainable under the sun, which is  hard to come by due to multitude number of applicants and limited number of available slot, which only very few candidate are able to make it to the list annually but our indefatigable woman role model made it not only to the list but to the top of the list. The selection criteria is solely a merit basethrough an online exam, and no wonder the annual pass for the online intake exam is usually less than five percent.Not surprisingly, she is one of the only six medical Doctors indigenous to the Kano State whom have achieved same.

Her qualification pitched her a lecturing job in the department of community Medicine Aminu Kano Teaching Hospital(BUK-AKTH) where she is currently serving and making tremendous contribution to the development of the department and the students alike through her hard work, resilience and intellectual rigor for a better public health policies and strategies by mentoring the undergraduate medical students and public health M.sc students for a conscious result based policy formulation.

Furthermore, an addition to her academic and professional qualification is her professional outstanding as the saying goes “what a man can do a woman can do even better” Doctor Amina’s Success in managing the CDC AFENET Piloted Malaria Project give her a name as the iron lady and an unstoppable achiever whom  no matter what the terrain looks like they achieve nothing but success, her leadership style in that capacity exemplified a textbook definition of what a manager is, her teaming NSLO would elaborate more on this point, but to say the least they were dumbfounded initially when they sent her an email in the wee morning hours and get the email replied back instantaneously despite her being a mother of five kids, a wife and a daughter of the current sitting  governor of the state.

As Adams Smith metaphorically speaks of invisible hands in his book the Wealth of the Nations, the description squarely match Doctor Amina, She didn’t have any appointment or defined office at the ministry of health Kano state per se but her innate urge for seeing a better Health for all in Kano as she  believes her efforts are  fruition(able) and the believe she has that she can help her father deliver the best health policies to the people of the state made her work tirelessly in making the ministry function beyond expectation.

Moving in the same lane she showcase another managerial prowess when the world was attacked by the plague of COVID 19 Pandemic in 2019/2020. As the famous Criminal law “but for test” goes, here I  must use the expression to say that but for Doctor Amina the battle against COVID 19 would not have been won the way it was won in the shortest period of time. She works day and night to make sure the fight is going on nonstop with full momentum, and the effort disseminated by her has yielded result, as within a few weeks the tide was turned down in Kano, and Kano State has dropped from the top of the NCDC table of cases to the bottom of the table. Kano state has succeeded in combating the virus more than any state in Nigeria and as a result the governor have received a number of recognition for that. What a Daughter! A kind of daughter every parent want behold. Alas, the real meaning of invisible hands.

On the humanitarian aspect of her Doctor Amina is a simple woman with a trait of good manners and humane characters that reflected what a rare breed of good mothers the GwaggonKanawa was, her unassuming disposition makes many doubt if she is really and truly a daughter to a currently sitting governor of a mega state like Kano. No wonder one day she went to a supervisory visit to one of her LGAMNSLO at Wudil LGA when he announced that his supervisor and a daughter to a current sitting governor of the state is with them, nobody seemed to have believed him because of the way and manner she interacted and chatted with them as if she is just a nobody’s daughter devoid of the normal to be expected demeanor of the power drunk children of bourgeoisie.