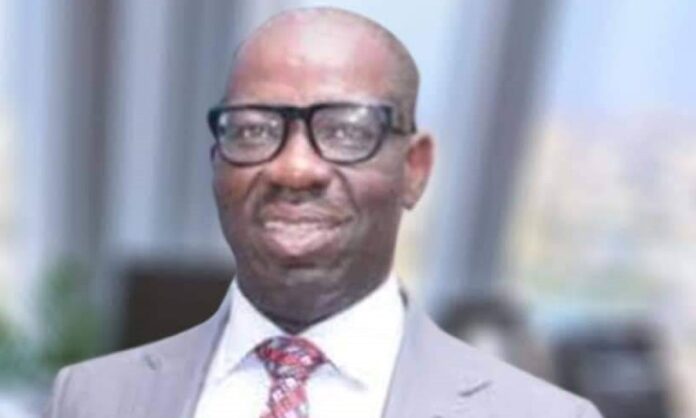 Sometime in June of 2020, the sword of disqualification was dangling precariously over the head of Governor Godwin Obaseki in the Edo State All Progressives Congress (APC). Quickly, the helmsman rushed to the press, somewhere in Benin City, where he displayed his educational certificates to his invited audience, raising the certificates to the razzle-dazzle of photographs and photoshops, with the aim of countering allegations that he was criminally parading forged documents.

He had insisted at the event that he had genuine certificates that were intact contrary to his own earlier claim in 2016 that the originals were missing. He reiterated that his certificates had no error, whatsoever. Obaseki further allayed fears by promising to produce his certificates any day, anytime to shut and shame his more qualified opponent and APC candidate, Pastor Andrew Osagie Ize-Iyamu (PAOI), who had before then challenged Obaseki to a public scrutiny of their respective educational claims.

Speaking later in the same month at Wadata Plaza, the national headquarters of People’s Democratic Party (PDP), after his defection and screening, Obaseki brimmed with smiles and bragged that contrary to the falsehood woven around his certificates, he had presented same to PDP’s screening committee, which found no error in them, whatsoever. Obaseki said: “The screening was fair; it was very professionally done. You could see objectivity and I presented all my certificates—my secondary school, higher school, university and my National Youth Service Certificates, so that they can look at them and see if there are inconsistencies in them.” “You can ask the screening committee if there are any inconsistencies in any of them,” Dirisu Yakubu of Vanguard quoted him in an online publication of 20th June, 2020.

But the first sign of a papered crack emerged same day elsewhere when Edo PDP chairman, Dr Anthony Aziegbemi, confusedly prevaricated in the usual PDP manner as he disclosed that Obaseki’s certificates would be investigated. He said in a widely reported online news report, including pmnewsnigeria.com, “I am sure you saw the sham called a screening committee which the other party had? It was a clear case of ‘vindictiveness of the highest order’ and there was no need for it to happen in the first instance. The PDP will set up a very powerful team to look at those papers.” The immediate question arising from Aziegbemi’s promise is: if Obaseki truly had genuine certificates, what was the need for a powerful PDP investigation of the same certificates that APC “vindictively” rejected?

Although APC fought and undone itself, allowing Obaseki and PDP’s alleged huge war chest of election funds that permeated and polluted the entire electoral system beyond the party’s platform to have its way. Obaseki won the election and was duly sworn-in for a second term. But the victory did not, by any means, erase or reduce doubts surrounding the veracity of his certificates, which, ordinarily, should have qualified or disqualified him from contesting the election. Those early doubts would now show that the immediate past national leadership of the party, led by Comrade Adams Oshiomhole, which Obaseki might have misinformed in 2016, took the safe path from losing another state election victory in court to present Ize-Iyamu APC flag, long after the PDP produced a damaging report on Obaseki’s controversial certificates in 2016.

Whatever doubts or errors in Obaseki’s certificates that APC allegedly shielded from 2016 to 2020 were eventually confirmed by the same party that fielded him after his disqualification by APC. The PDP told Edo Governorship Election Petition Tribunal in Benin City in November 2020 that, indeed, there was “an error” in the certificates Obaseki submitted for the 2020 Edo governorship election. PDP’s late admission of error in the governor’s documents is destructive. As innocuous as it might seem, it has worsened Obaseki’s case by setting the stage for his removal from office, going by the provisions of the Electoral Act 2010 and the Constitution of the Federal Republic of Nigeria (as amended). It has also set him up for a possible prosecution for alleged criminal offences of forgery of certificates, deliberately lying under oath (perjury) with a possible refund of all calculable financial benefits in office, if he is indicted.

Fast forward to Tuesday, 22nd December, 2020, the day Obaseki’s lead counsel, Ken Mozia (SAN), told the Federal High Court, FCT Division, to suspend hearing in the suit marked FHC/B/CS/74/2020 because Obaseki has appealed to a higher court, once again, to stop his trial for alleged forgery and perjury. According to Mozia, Obaseki has filed an appeal at the Supreme Court against the decision of the Federal High Court to retain certain paragraphs in the allegation against him. The paragraphs contain details of alleged offences of forgery and lying under oath. Mozia said the appeal is marked: SC/C6/989/2020.

Challenging the judge’s jurisdiction to hear the matter during holidays when he is not a vacation judge, Mozia said the consent of the defendant must first be obtained to continue the suit. But countering Mozia with superior argument, plaintiffs’ lead counsel, Chief Akin Olujimi (SAN), reminded all about Appeal Court’s dismissal of Obaseki’s stay of execution before ordering accelerated trial. Then, he stated that the declaration of vacation is contained in a mere “Circular” that is not Law. A circular, Olujimi added, cannot stop the proceedings of a time-bound, pre-election matter in court, as set out in the Chief Judge’s Practice Direction.

Obaseki is accused of forging his university certificate and creating discrepancies in subjects he claimed to have passed under the West African Examination Council. The suit is legally bound for determination in 180 days. It terminates on January 13, 2021.

This latest attempt to stall proceedings confirmed this writer’s claim last week of a secret effort to evade justice through the back door of blackmail, technicality and money by those who would suffer irreparable damages from the dispensation of equal right.

This is not the first frivolous, vexatious and reprehensible application the embattled governor has filed to provoke and ridicule the judiciary, especially the hallowed chamber of Justice Mohammed. On Wednesday, 16th December, 2020, the Court of Appeal in Abuja dismissed without much ado Obaseki’s appeal to stop his trial at the Federal High Court. The appellate court ordered him to return to the lower court to face accelerated trial. The governor has also embarked on a similar wild goose chase at the Court of Appeal, Benin Division, after losing a suit at the State High Court in Benin.

Following Abuja appellate court’s upturn, Edo State Government House, which erupted into a celebration the previous day when the lower court suspended the trial, became a graveyard of mourners. As supporters dispersed haphazardly, a dejected Obaseki hurriedly cancelled engagements ahead before absconding into an aeroplane for a journey to Abuja. As he was meeting aides and legal team in Abuja, searching for the solution to his impending removal from office, his supporters were busy bragging online about how the Supreme Court will ‘fix’ his mess.

Obaseki, a man who has never stopped bragging about his certificates that earned him the sobriquet: Mr Technocrat, is suddenly tucking his hairless tail between his legs running from court summon seeking to verify his acclaimed certificates. Instead of evading justice, the alternative for Obaseki to save his face now is to resign from office like Mrs. Kemi Adeosun, Mr. Adebayo Shittu and others commendably did to honour the Constitution and save the judiciary invaluable time to dispense justice to other citizens.