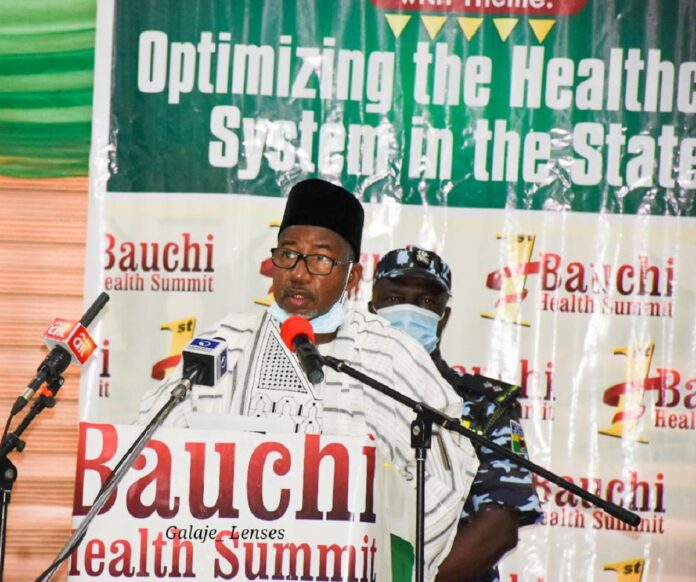 Governor Bala gave the explanation today Monday in Bauchi when he declared open Health summit Conference organised by the state ministry of Health at the Command guest  House Bauchi .

He said as a state, we are putting our house in order by blocking leakages and administrative infractions in the system.

“In our effort to clean the state payroll, we recently removed 2,116 ghost workers from the state government payroll.

“Among them are 100 doctors and 120 Primary Healthcare staff working with NGOs within and outside the state who are collecting salaries from the state government even after they have officially exited from service,” he said

He said the summit  will provide an opportunity for discussion on the strength and weakness facing healthcare delivery in the state with a view to proffer enduring solution.

Governor said the state government deemed it necessary to come up with the summit as his administration had inherited a malfunction and highly inefficient health system characterized by huge infrastructural deficit, inadequate human resources among others.

“I am highly delighted to welcome you all to this very special occasion. I am especially happy to welcome the Honorable Minister of Health and his entourage to Bauchi State as our Special Guest of Honour on the first Health Summit in the history of Bauchi State.”

” This summit is not intended to be talk-shop, it is not for the optics either. We want all of you participants to broaden the scope of your knowledge, widen our horizon regarding the constraints and limitations, the gaps and the empirical practices that will guide us in providing one of the best healthcare services in the country. That is our goal.”

The Governor who told the participants the number of achievements recorded by his administration in the health sector, said its target is to renovate one hospital in all the Local Government Headquarters of the state.

” These and more moved me to declared a State of Emergency on Health. As a first step we ensured the release of all counterpart funds for our various partnerships.”

He assured that, recommendations from the summit will be taken into consideration especially in the planned of recruitment of health personnel and advancing the sector.

“This summit will be meaningful only if in the next two to six years, Bauchi State is adjudged to have achieved a significant milestone in these areas of overcoming our infrastructure deficit in the sector, possessing some of the best medical care professionals to serve the needs of our people, addressing the core challenges of medical care for the greater number of our disadvantaged citizens.”

Governor Bala  therefore sought for more support from development partners and other key stakeholders in the efforts of the state government towards repositioning and strengthening the state health system for the delivery of qualitative healthcare services to the citizens particularly Reproductive, Maternal, Neonatal, Child, Adolescent and Elderly Health Plus Nutrition.

” We have a dream for prosperous Bauchi State where the provision of dependable healthcare will be pride of of us all. I hope and pray, you will be our partners in the actualisation and realization of this dream.”

The Minister of Health, Dr Osagie Ehanire who declared the summit open, described the conduct of the summit as timely and suggested for the use of technology in order to achieve the desired objectives.

The Minister Commended Governor Bala Mohammed for the achievements so far recorded in the sector and pledged for continued support for effective service delivery.