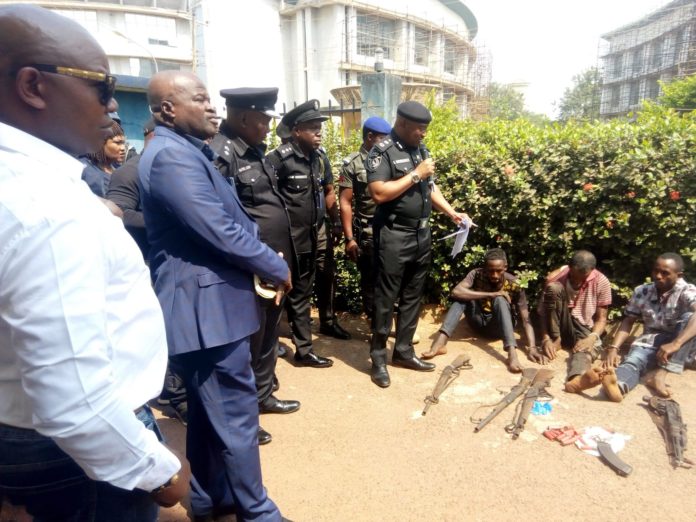 The Enugu State Command of the Nigeria Police Force has quizzed four policemen allegedly involved in the escape of two herdsmen with a Ghana-Must-Go filled with naira suspected to have been ransom collected from families of their kidnapped victims.

A police source, told our correspondent on Monday that the policemen were summoned at the state criminal investigation department on Saturday to explain their actions.

247ureports had reported on Thursday how two Fulani herdsmen suspected to be kidnappers escaped with a Ghana-Must-Go filled with naira in a checkpoint at Ikem police division.

The herdsmen were suspected to be behind the abduction of four persons returning from burial ceremony in Nsukka penultimate Friday along Nike-Ugwogo-Nsukka.

The four persons abducted include a lawyer, two businessmen and a Reverend sister, among whom three were released after ransom was paid.

The fourth person, one Mr Anayo Ukwu, who was reported last Thursday to have been released through the effort of the state government in some sections of the media, is yet to return to his family, raising fears that he might have been killed.

The source stated that the policemen who admitted during interrogation at the state police headquarters that they saw the kidnap suspects on  motorcycle, denied aiding their escape.

According to the source, “the policemen said that they were in their station located along Ikem-Eha-Amufu road when an Okada man carried two herdsmen with a Ghana-Must-Go, but its content weren’t.

“When they were asked to stop the Okada man sped off and they instantly pursued them but they escaped with bullet wounds.”

When contacted on telephone, the state Commissioner of Police, Ahmad Abdurrahman and the state Police Public Relations Officer, Daniel Ndukwe could not answer their calls. Also they didn’t respond to text messages sent to their mobile number