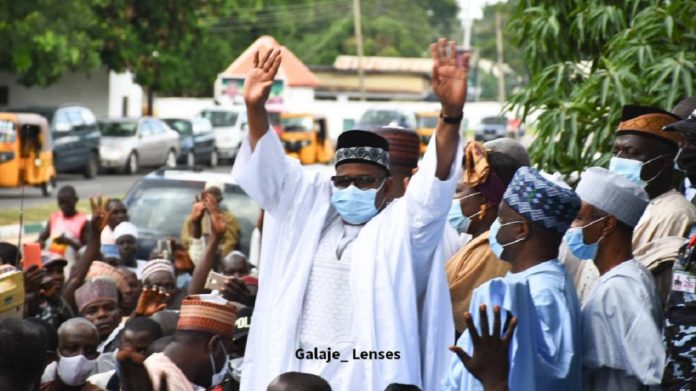 In every setting in life, there does exist a category of people who see nothing good in any positive efforts, made out of goodwill to improve the lives of the people. Handling this group of people is, without doubt, the most distressing and hectic aspect of Government business, as they myopically tend to lead the good citizens astray and give them wrong impression.

There was public derision after an appointment letter confirming Balaraba Ibrahim as “Special Assistant to the governor on Women Affairs (Unmarried)”, surfaced on social platforms, owing to the appearance of the word “unmarried”.

The State Government through the office of Special Assistant to the Governor on Media, Mukhtar Gidado has told the BBC that it was a typing error and that she was in fact appointed as “Special Assistant on Women Affairs (Divorced)”.

The appointment which was copied from neighbouring Kano state has a similar role. In her new responsibility, Ms Balaraba Ibrahim, a divorcee herself, is obliged to be engaging women in a think thank of sister conversation garmane to their existence with a view to providing them with solace and solutions, and is expected to be organising state sponsored mass-weddings for divorced women and also supporting their business ideas. This is not a responsibility she is new to, Ms Ibrahim was head of the association of divorced women in Bauchi state where she has organised meetings and programmes for them. Following her selfless service to women, devotion to duty and sense of responsibility, the Governor saw her fit to assist him fulfill his campaign promises among Wich include provding an avenue for women to feel and taste the divident of democracy, thereby improving their lives and giving them sense of belonging.

Reports indicate that, the percentage of divorce rate is high in northern Nigeria, and it appears to be the most itchy part of women’s body. The saddest part of it is, despite their gigantic contribution in every Democratic dispensation, women’s voices are muted, their dreams, yearning and aspirations are not taken into cognisance; they are discriminated and dominated by men, in fact, sometimes, they tend to fall prey for dishonest people, mainly because they know fully that the women have no channel through which their voices can be heard.

Governor Bala Mohammed out of his compassion for the plight of women, especially widows and divorcees who are mothers, sisters and daughters and who require special attention; has made difference to have appointed their fellow woman whose pedigree is a golden one in championing the cause of women. This alone is a testament to the Governor’s intention to carry everybody along without an iota of prejudice against gender. The appointment should, therefore, rather be a glad tidings than a subject to controversy.

And since the appointment is a copied one from Kano State, It would be recalled that within 3 yeas (2012-2015) in Kano, no fewer than 5,000 widows and divorcees had  benefitted from the government- sponsored mass wedding programme introduced by former Gover Rabi’u Kwankwaso. From 2015 till date, the Kano State Government has sustained the programme to have been organizing programme as regards to the dittoed. This has been a blessing to the State, as owing to the policy, the rate of prostitution and other vices women, especially widows and divorcees do indulge in, out of depression, have drastically reduced.

The good citizens of Bauchi State, particularly women, should be hopeful and optimistic that the appointment will yield a juicy and fruitful outcome, and under the watch of conscientious Governor Bala Muhammed, their lofty dreams will always certainly be  reality

Maijama’a of the Faculty of Communication, BUK writes.