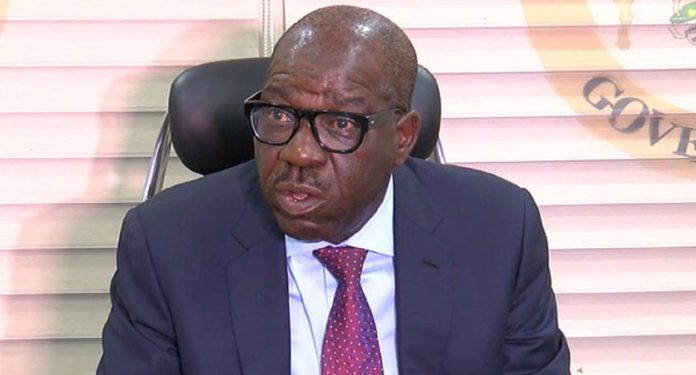 for coming out to confront, subdue and chase away armed thugs hired by

the All Progressives Congress (APC) to attack the PDP and Obaseki

campaign train in the area.

The firm solidarity and defense for Governor Godwin Obaseki by the

people of Apana, Uzairue in Etsako West, where the sacked national

chairman of the APC, Adams Oshiomhole, hails from, is a clear signal to

Oshiomhole and the demarketed APC candidate, Osagie Ize-Iyamu, that the

race is over for them.

political pint-size that only thrive in empty boasts, lies, propaganda

and attempt to instill fear on the people by importing violence.

The courage and bravery exhibited by the voting population in Etsako, in

confronting and vanquishing APC’s armed thugs, is a firm demonstration

of their unwavering solidarity for their choice leader, Governor Obaseki

to use compromised security agents to seize the State House of Assembly,

state, to unleash violence on them and rig election for Ize-Iyamu, hence

their manifest resolve to protect their state.

It is indeed reprehensible and inexcusable that a political party, which

desires to take over governanice of a state, would be hiring and arming

it wants to govern.

In any case, our campaign counsels Ize-Iyamu and Oshiomhole to see the

their plans and will use every means legitimate, to resist their evil

Of course nothing, not even the fiercest of attacks by Oshiomhole and

Ize-Iyamu, can intimidate the people of Edo state to compromise their

determination to reelect Governor Obaseki, under whom the state has

Under Governor Obaseki, millions of Edo citizens have benefited from

various development programs including the creation of over 200,000

training of over 150,000 Edolites in various entrepreneurial skills,

over 4,000 job placements in productive sectors and 22,827 entrepreneurs

trained in all local government areas among others.

This is in addition to improved healthcare, road infrastructure,

establishment of agriculture, food and other investment clusters across

the state with massive job opportunities.

governance which he and the PDP represent in the state.